Portland will probably achieve a record in a few days:  the driest April ever observed, with much of the rest of the region also sharing below-normal rainfall.

What is causing this dryness?   Have we been trending towards drier April conditions over the region?   What is the precipitation outlook for the next month?

All of these issues will be discussed in this blog.

The driest April on record was in 1956 when just 0.53 inches fell over the entire month.  With two days left to go, Portland’s monthly total is 0.29 inches.  The latest precipitation forecast through 4 AM Saturday (below) shows only a few hundredths of precipitation falling on Portland.

The record will probably be broken. 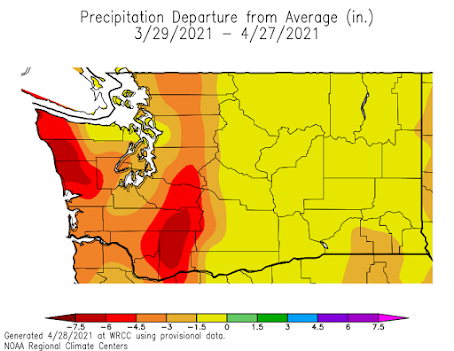 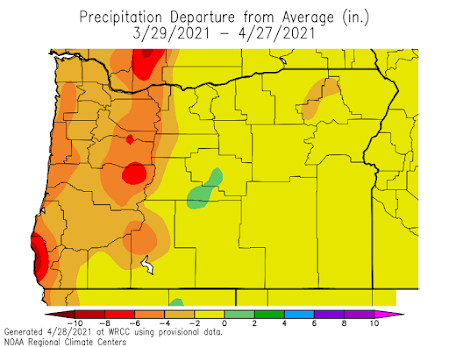 This is illustrated by a chart showing the difference from normal (the anomaly) of 500 hPa heights (think of this as the pressure at around 18,000 ft) for the past month.  The red area indicates much higher than normal pressure over the eastern Pacific.  This pattern tends to cut off the moist southwesterly flow that brings substantial rain to our region. Instead we have relatively dry northwesterly to northerly flow.

Why did this pattern set up?   Although there could be other causes, this pattern is consistent with La Nina (cool waters in the central/eastern tropical Pacific), which has been in place during the past winter.  March was also quite dry over the West Coast, for the same reason.

A natural question is whether Aprils are getting drier, and, if so, whether global warming could be contributing.   So let’s plot up April precipitation over Washington and Oregon from 1930 through 2019, using the NOAA/NWS Climate Division data.

Interestingly, the trend is towards wetter Aprils.  So there is little reason to point to climate change as the cause of our current dry conditions. 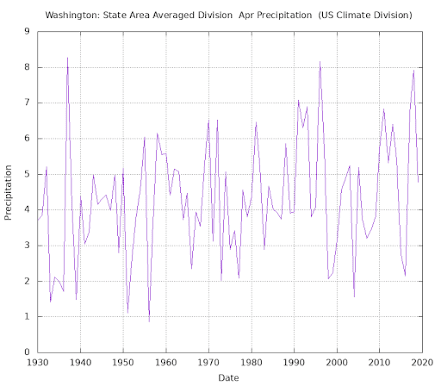 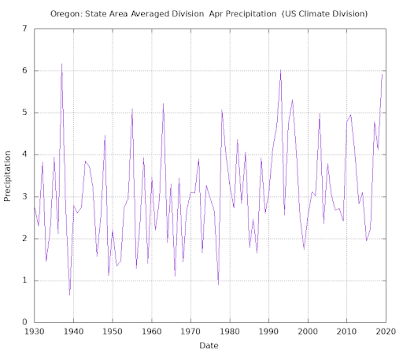 Looking forward to the Spring season, what can we expect for precipitation?  Although our forecast skill does fade substantially for projections more than a week, let me show you the latest one-month precipitation forecast from the most skillful extended prediction system on the planet–from the European Center for Medium-Range Weather Forecasting.

Oh-oh. More of the same. Drier than normal over the Northwest and California. 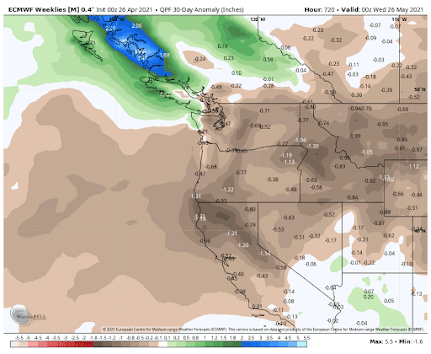 For us here in the Northwest, we probably have no worries about water supply this summer.  The snowpack is above normal still over most of Washington, and the western slops of the Oregon Cascades are only modestly below normal (see graphic).  But eastern Oregon has seriously reduced snowpack. 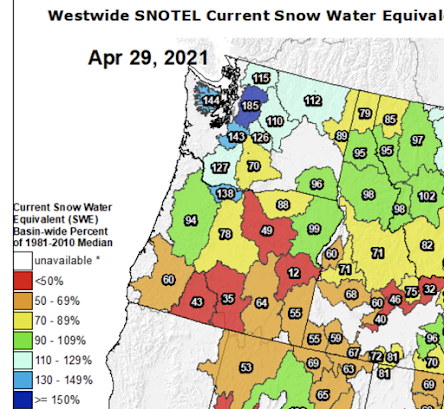 The reservoirs that supply western Washington and Portland are in good shape and the critical Yakima River Reservoirs are near normal (see below): snowmelt should fill them. 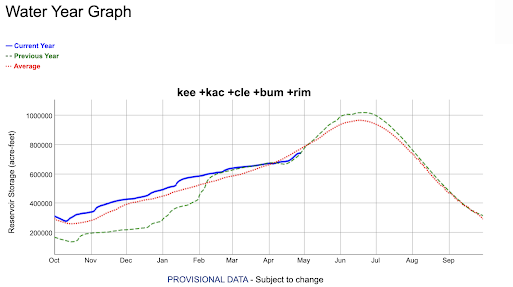 But the dry conditions are of concern, particularly regarding an earlier than normal wildfire season east of the Cascade crest.  The 10-h deal fuel moisture (applicable to grasses and shrubs) is now dry enough to burn in portions of eastern Oregon and California, and probably as well over sections of the lower eastern slopes of the Cascades.

We will need to be careful. 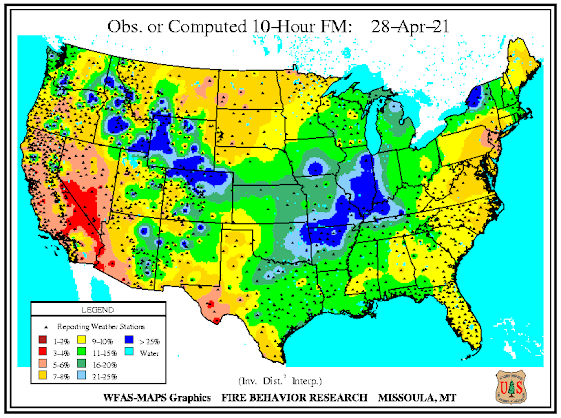 The Northwest Weather Workshop, the annual gathering to talk about Northwest weather, climate, and major meteorological events, will take place on May 1, 2021. This year we will have a special session on the meteorology of the September 2020 regional wildfires. The meeting will be online. More information, the agenda, and registration information is found here: https://atmos.uw.edu/pnww/