I think I found something important.

But I will let you be the judge.  And I would love to hear from any epidemiologists that read my blog.

The number of COVID cases is increasing in Oregon and Washington, while most of the other states are seeing declining or stable COVID caseloads.  The increases are sufficiently worrying that Governor Inslee may reverse the opening of the State. 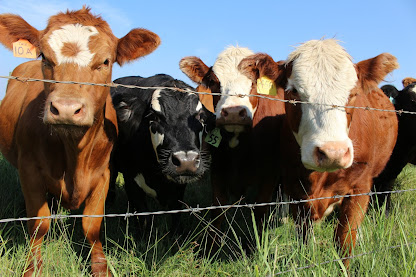 There is a lot of talk about the need to get herd immunity, in which enough of the population will be vaccinated or have had COVID so that the virus lacks sufficient susceptible people for spread.  But no one seems to be sure about what percentage of immune individuals is needed.  60%, 80% or 90%.   Some scientific papers and media accounts suggest we will never get to herd immunity.  But what is the truth?

I have not an epidemiologist, but it seems to me that there should be sufficient information to get some real answers for the above questions.   And so I sat down with a cup of coffee (actually several) and the data from the Centers for Disease Control and cranked through the numbers.

And I found something interesting.

For each state,  I estimated what percentage of the population is immune to COVID-19 and then I compared that to the change in the number of new cases over the past few weeks.

I found a significant relationship between the two.  And I may have discovered the magic herd immunity percentage.

Estimatin the Percent of the Population Immune to COVID-19

First, I started with the percentage of each state’s population that has been reported to have had COVID-19, which ranges from roughly 4 (Oregon) to 14  (Rhode Island) percent. 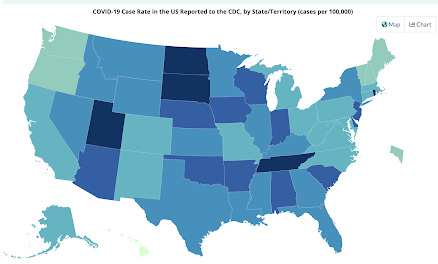 There is an extensive literature suggesting the actual numbers of infected people are far higher than the official case numbers, with several research papers suggesting that a factor of three is reasonable.    So I started by taking the CDC state case percentages and multiplying by 3.

Then I secured the vaccine data for each state, and based on the CDC numbers of single and double vaccinations, I assigned 60% of the total vaccinations as the number of people that have gotten at least a single shot.    I then added this number to the 3 times case percentages noted above, to get a final fraction of immune individuals for each state, with numbers running from .56 (Oregon) to .936 (Rhode Island).  This will undoubtedly be a bit of an overestimate because there will be some people that have had COVID that are vaccinated.

That Change in COVID Cases for April 15-April 28th

My hypothesis is that increasing percentages of antibodies for COVID should be related to declines in COVID case numbers.   Sot I next turned to the CDC COVID trends pages.

Here is the one for Oregon.  Not good.  Cases have been rising quite a bit (blue are daily values) and red are 7-day running means). 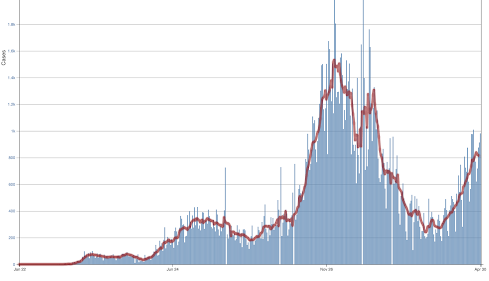 For Washington State, the situation is a little better, but still going the wrong way.  This is why Governor Inslee is threatening to clamp down (and I will suggest later that this would be a mistake).

On the other hand, Rhode Island and Massachusetts are seeing rapid declines.  Can we understand why?  I think we can.

Using the CDC trend plots and accompanying numbers, I found the changes in the number of cases for roughly the last two weeks (April 15 to April 28th), using the red lines (running 7-day means) shown for each figure.  Then I  compared the recent case number trends in each state against the fraction of state citizens that were immune.  The results are shown below.  And they are exciting and make a lot of sense.

The Y-axis indicates the change in the number of cases per 100K residents and the X-axis is the fraction of state citizens that are immune.  Each dot is a state.

The two states with the largest INCREASE in COVID cases for that period are Oregon and Washington!  And we are the states with the smallest percentage of immune individuals.

But once you get above .65  there are no significant increases in COVID.  But what REALLY is significant is that the big drops in the number of cases start abruptly around .7, at which 70% of individuals are immune.  Something very special is happening at .7 and it appears it represents the transition to herd immunity. 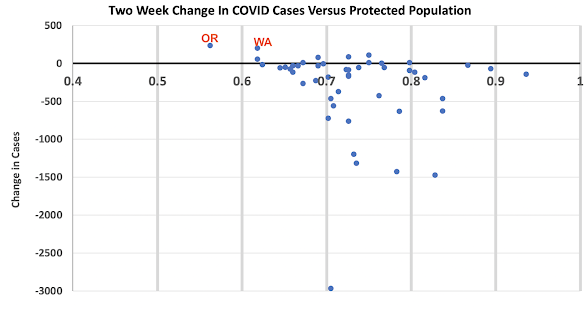 Now you may ask why some states are above .7 but are not showing recent changes.   I believe there are several reasons for this.  Some of these states that made the transition to herd immunity earlier than two weeks ago.  Once a state transitions, numbers fall and stabilize.  Another possibility is that a major reopening of a state can temporarily maintain current COVID levels.

But there is a clear message from the above.  Once you get to .7, the expansion of COVID is over and a collapse of the number of cases is possible.

Now there is a potential message here for Governor Inslee in all this.

Washington State is on the verge of reaching a sufficiently large percentage of immune individuals so that COVID cases will first stabilize and then rapidly decline.  At the large rate of vaccination being given in our state (about 60,000 per day according to the WA DOH website) plus the natural spread of the virus, we move from ~.63 today to .7 in roughly a week.    Do we need to add restrictions at this point? 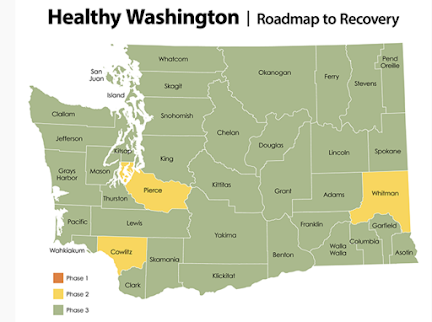 Does the above analysis make sense?  Why haven’t others done similar number crunching?

Let me know if you see any flaws in logic or approach.  But it all seems to make sense and the picture is coherent and self-consistent.