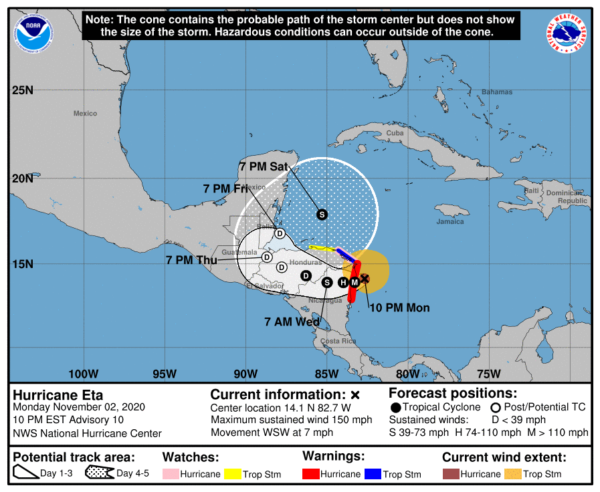 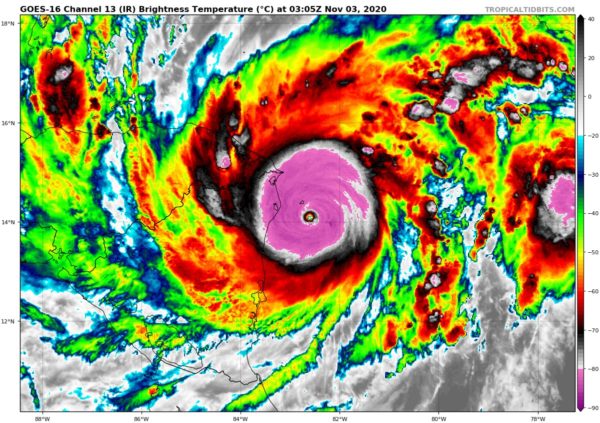 DISCUSSION AND OUTLOOK
———————-
At 1000 PM EST (0300 UTC), the center of of the eye of dangerous
Hurricane Eta was located by reconnaissance aircraft and radar from
San Andreas near latitude 14.1 North, longitude 82.7 West. Eta is
moving toward the west-southwest near 7 mph (11 km/h), and this
general motion is expected to continue through early Tuesday. A
slower westward or west-northwestward motion is forecast to begin by
Tuesday afternoon and continue through Thursday. On the forecast
track, the center of Eta is expected to make landfall along the
coast of Nicaragua within the Hurricane Warning area early Tuesday.
The center of Eta is forecast to move farther inland over northern
Nicaragua through Wednesday night, and then move across central
portions of Honduras on Thursday.

Reports from the Hurricane Hunter aircraft indicate that maximum
sustained winds are near 150 mph (240 km/h) with higher gusts. Eta
is a category 4 hurricane on the Saffir-Simpson Hurricane Wind
Scale. Some strengthening is forecast during the next 12 hours, and
Eta could become a category 5 hurricane before it makes landfall.
Weakening will begin after the cyclone moves inland. An Air Force
Reserve hurricane hunter aircraft is currently investigating Eta
and will provide more data tonight.

The minimum central pressure based on data from the aircraft is
estimated to be 927 MB (27.38 inches).

RAINFALL: Eta is expected to produce the following rainfall amounts
through Friday evening:

This rainfall would lead to catastrophic, life-threatening flash
flooding and river flooding, along with landslides in areas of
higher terrain of Central America. Flash flooding and river
flooding would be possible across Jamaica, southeast Mexico, El
Salvador, southern Haiti, and the Cayman Islands.

STORM SURGE: A dangerous storm surge will raise water levels by as
much as 14 to 21 feet above normal tide levels in areas of onshore
winds along the coast of Nicaragua within the hurricane warning
area, and 3 to 5 feet above normal tide levels along the coast of
Honduras within the tropical storm warning area. Near the coast,
the surge will be accompanied by large and destructive waves.

SURF: Swells generated by Eta are expected to affect portions of
the coast of Central America and the Yucatan Peninsula of Mexico
during the next few days. These swells are likely to cause
life-threatening surf and rip current conditions. Please consult
products from your local weather office.