Hurricane Eta is no threat to Central Alabama or the Alabama Gulf Coast for now. Will have to keep an eye on it after it reemerges off of the northern Honduras coast late on Friday. 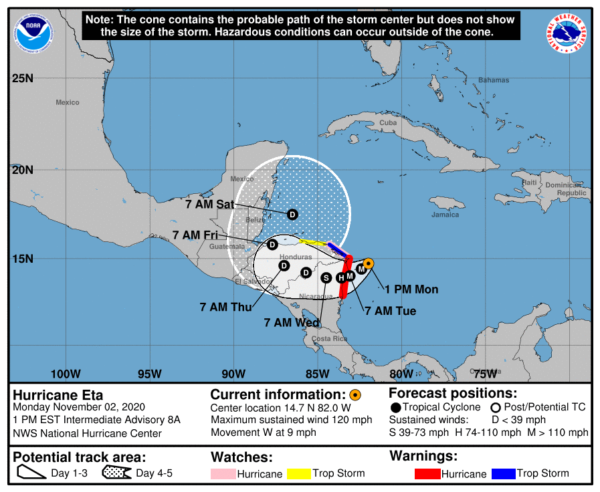 DISCUSSION AND OUTLOOK
———————-
At 100 PM EST (1800 UTC), the eye of Hurricane Eta was located near latitude 14.7 North, longitude 82.0 West. Eta is moving toward the west near 9 mph (15 km/h). A slower motion toward the west-southwest is forecast this afternoon and will continue into Tuesday. On the forecast track, the center of Eta is expected to approach the northeastern coast of Nicaragua later today and make landfall within the Hurricane Warning area in Nicaragua on Tuesday. The center of Eta is forecast to move farther inland over northern Nicaragua through Wednesday night.

Satellite data indicate that Eta continues to rapidly strengthen. Maximum sustained winds have increased to near 120 mph (195 km/h) with higher gusts. Eta is a category 3 hurricane on the Saffir-Simpson Hurricane Wind Scale. Continued strengthening is expected until Eta reaches the coast of Nicaragua. Weakening will begin after the system moves inland.

RAINFALL: Eta is expected to produce the following rainfall amounts through Friday evening:

STORM SURGE: A dangerous storm surge will raise water levels by as much as 12 to 18 feet above normal tide levels in areas of onshore winds along the coast of Nicaragua within the hurricane warning area, and 3 to 5 feet above normal tide levels along the coast of Honduras within the tropical storm warning area. Near the coast, the surge will be accompanied by large and destructive waves.

SURF: Swells generated by Eta are expected to affect portions of the coast of Central America and the Yucatan Peninsula of Mexico during the next few days. These swells are likely to cause life-threatening surf and rip current conditions.