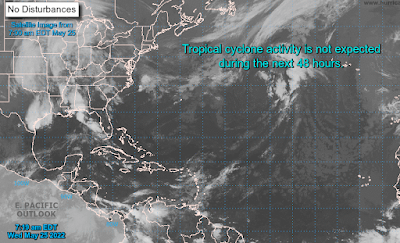 Nothing expected in the short term. 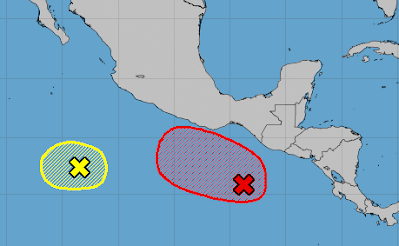 Long range models have been sniffing out something in the GOM that could be remnant moisture from the system that is forming in the EPAC and crosses Mexico.  You can see the system highlighted in red that is primed for development and you can also see where the land mass of Mexico is narrowest. Should this form and cross that land bridge, as many early systems try to do, any remant moisture ends up in the Bay of Campeache and could develop. Long range models are very iffy, but they show the pattern and possibilities. And, as I have said a million times online, patterns are everything. Sometimes patterns produce named tropical storms exactly on the start of the Atlantic Hurricane Season on June 1st and other times they deliver heavy tropical rain with flooding and severe weather warnings. So basically we are in a watch and wait period. I often always say “when something forms in the EPAC” you can usually not expect anything in the Caribbean or Gulf of Mexico to form (due to shear and other issues) and count five days to a week and then look for development on our side of Mexico and Central America. 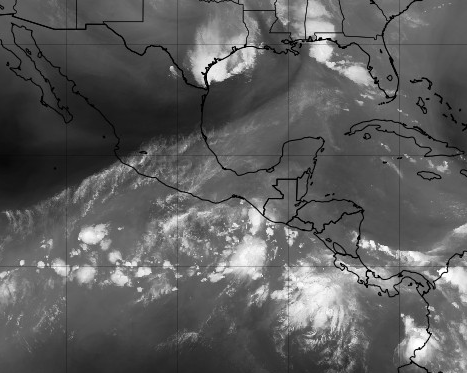 Just a quick reinforcement of what I said yesterday in a longer blog, the sharp diagonal line seen above that runs SW to NE is shear and dry air. Warm moist air is to the South where the two candidates for development are being monitored by the NHC. The blob over Texas is a blob, too much shear and dry air there currently. Anything that does form in the EPAC will move inland and again remnant moisture could develop down the road, way down the road.

The huge Low in the Atlantic is still anchored there and waves are still coming off of Africa. A front is forecast to move down over Florida further lighting up the sky with thunderstorms at the end of this week and generally this time of year the fronts go flat somewhere and as always we watch decaying frontal boundaries for possible, home grown development.

A brief note on Texas……

It was very sad, upsetting watching the horrible, deadly, developments that came out of the news story yesterday. Offering prayers for the people there who all know each other well and their lives are extremely entertwined as are lives in a small community. Some may say prayers do not do anything, but personally I think they do and it doesn’t do any harm. The violence needs to stop, anger and hatred need to stop. And, more so I fear with every event such as this there is some copy cat tragedy and that too has to stop. It just has to stop but for now I send prayers, good thoughts or however you perceive that.  I don’t usually go political on the blog, but I don’t think this is “political” I have no “agenda” I’m just responding as a person, a mother, a human being saying I didn’t do much weather watching last night. I so prefer weather over the news sometimes.

Ps Please reread the blog from yesterday if you have not as it is more indepth into why it’s currently quiet in the Atlantic side of the Hurricane Basin. And, that also explains what to look for the why and when things get busy vs staying quiet.