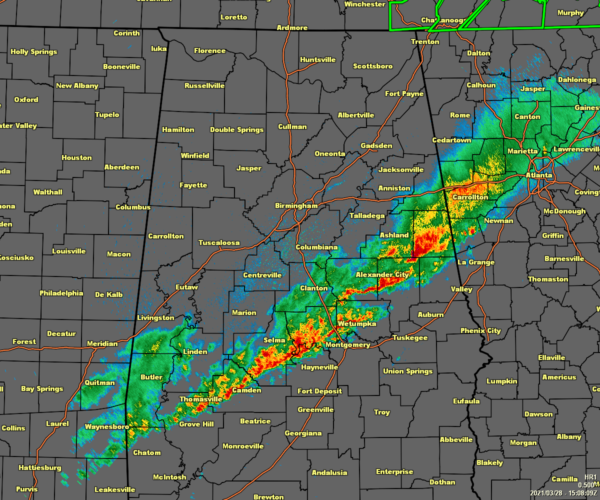 As of 10:10 am, the line of rain and storms has pushed through much of Central Alabama and is now approaching the I-85 corridor in the southeastern parts of the area. At this point, the strongest storm in the line is located over Tallapoosa County where gusty winds up to and exceeding 40 mph may be occurring.

Temperatures out ahead of the line of storms and cold front are in the mid to upper 70s, while behind the line, temperatures have started cooling off and is down into the upper 50s to the upper 60s. Birmingham was down to 65 degrees at this point, but was up at 75 degrees right before the line moved through the Magic City. 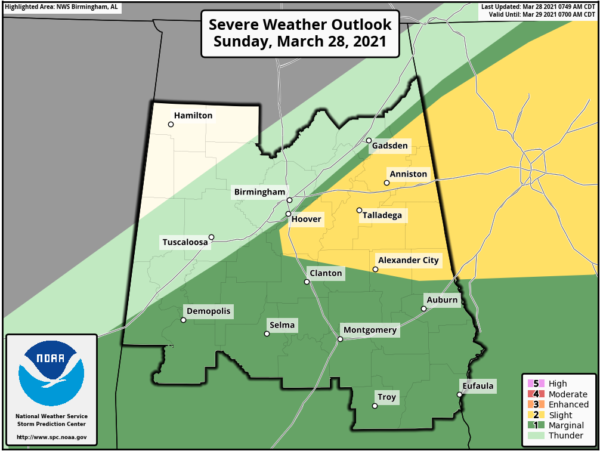 The storms have nearly moved completely out of the Slight Risk locations and is moving into an atmosphere where the conditions are only leading to a Marginal Risk of severe storms. Gusty winds will be the main concern as there is no threat of large hail or tornadoes at this point. We will have to watch in the southeastern parts later as we get into the afternoon as there could be some redevelopment within the area.

The Severe Thunderstorm Watch was allowed to expire at 10:00 am, and there are no severe weather watches or warnings in effect for North/Central Alabama.