RADAR CHECK: As advertised, drier air has worked into the northern half of Alabama this afternoon; widely scattered showers are on radar over South Alabama, but the rain there is not especially heavy or widespread. Temperatures are generally between 87 and 91 degrees; the average high for Birmingham on August 12 is 91.

Most of Alabama will stay dry over the weekend with mostly sunny days, fair pleasant nights, and slightly lower humidity values. Showers will be confined to the far southern part of the state and near the Gulf Coast. Highs will be close to 90, with lows in the 60s. We expect to see some low 60s early tomorrow across cooler pockets of North Alabama for a little touch of fall.

NEXT WEEK: The latest global model data suggests most of the state will remain dry Monday and Tuesday; moisture levels rise over the latter half of the week, with scattered showers and storms returning Wednesday through Friday. The high will be in the low 90s Monday, then in the 86-90 degree range for the rest of the week. See the daily Weather Briefing video for maps, graphics, and more details. 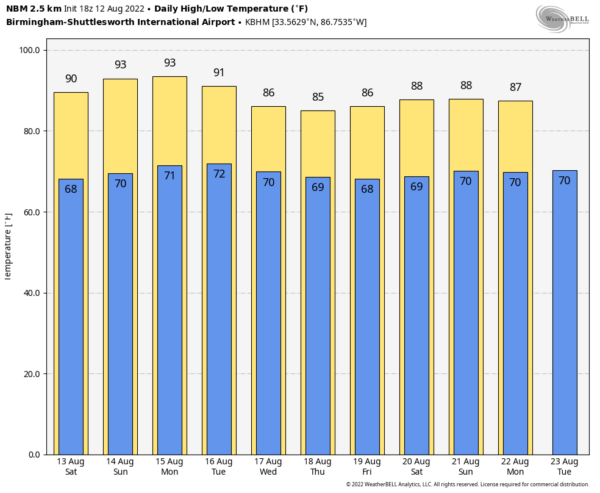 TROPICS: Disorganized showers and thunderstorms over the north-central Gulf of Mexico are associated with an area of low pressure centered just offshore of the southern coast of Louisiana. Development, if any, of this system is expected to be slow to occur as it drifts west-southwestward and approaches the Texas coast over the weekend. Regardless of development, locally heavy rains are possible along portions of the Texas coast through the weekend.

NHC gives it only a 10 percent of development over the next five days, and it won’t impact the Central Gulf Coast (Gulf Shores to Panama City Beach) directly. The rest of the Atlantic basin is very quiet. 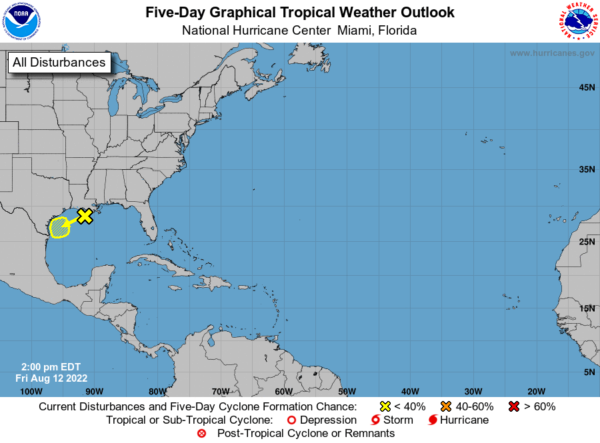 ON THIS DATE IN 1955: Connie made landfall on the North Carolina coast as a Category 3 hurricane. Ahead of the storm, about 2000 people were evacuated from flood-prone areas in New Bern and up to 14,000 people were evacuated along the North Carolina beaches. As the storm reached landfall near Fort Macon, sustained winds of 75 mph with gusts to 100 mph were observed, while a storm surge of up to 8 ft occurred along the coast.

In Connecticut, rain from Connie, and later in the month from Hurricane Diana, which followed a similar path, set up severe flooding during August 1955. The amount of rain that fell in August 1955 in Connecticut is so off the charts no event has come anywhere close to it in the last 100 years. That year’s monthly record of 21.87? at Bradley Airport stands alone as the wettest month on record – the second highest 16.32? from October 2005 lags far behind.

ON THIS DATE IN 2005: A tornado strikes Wright, Wyoming, a coal-mining community, killing two and destroying 91 homes and damaging about 30 more in around the town.

Look for my next Weather Briefing Video here by 6:00 a.m. Monday… enjoy the weekend!