DRY DAYS: Alabama’s weather will be dry this week. With a sunny sky today we expect a high in the low 80s. Cooler air arrives tonight, and some of the cooler pockets over the northern half of the state could wind up in the 40s early tomorrow morning. Then, we are forecasting sunny pleasant days and clear cool nights tomorrow through Friday with highs in the mid to upper 70s, and lows mostly in the 50s.

THE ALABAMA WEEKEND: At this point it looks like the rain shield associated with Ian will stay east of Alabama over Georgia and the Carolinas. Some rain is possible for communities near the Georgia border Saturday, but most of the state will be dry with a high between 77 and 80. Sunday looks like a beautiful day with ample sunshine along with a high in the low 80s. Things look good for race weekend at Talladega.

The dry weather will likely continue next week; we see no major rain event for the state for the next 7-10 days. See the daily Weather Briefing video for maps, graphics, and more details. 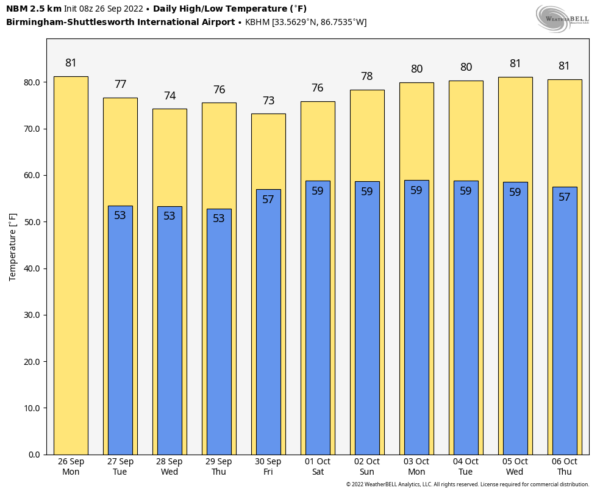 *Ian is now located 315 miles southeast of the western tip of Cuba; Ian has reached hurricane strength with winds of 75 mph.

*The new NHC forecast track this morning has been nudged eastward again, and brings Ian into the coast near Cedar Key Thursday night. 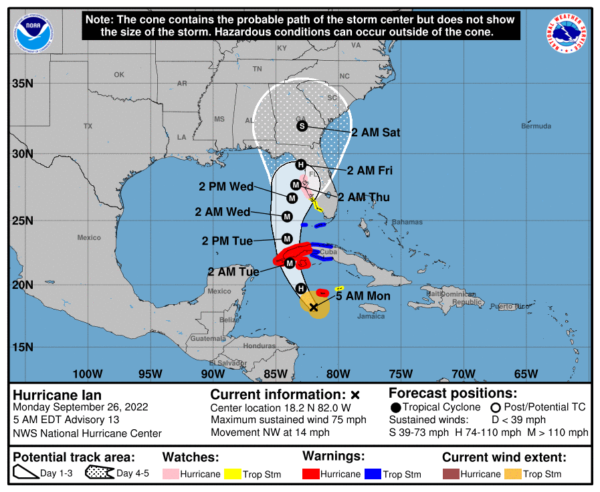 A Hurricane Watch is in effect from Englewood to the Anclote River, including Tampa Bay

*The main impact from Ian will be over the Florida Peninsula, not the Panhandle.

*In terms of intensity, Ian is expected to rapidly intensity to major hurricane strength (category three or higher) by tonight and early tomorrow as it moves over the western tip of Cuba. It is forecast to remain a major hurricane in a position just west of Tampa Bay Wednesday night, then weakening as it moves inland Thursday night due to strong winds aloft disrupting the core of the hurricane.

*But, while the hurricane will weaken, it will also begin to move slower, and the wind field will be expanding. There will still be considerable wind and surge impact at the time of landfall, especially along and east of the center.

*Cities like Tampa, St Petersburg, Orlando, Fort Myers, Sarasota, and Bradenton will experience tropical storm conditions by Wednesday and Thursday. Hurricane conditions are possible along the West Coast of Florida where the hurricane watch is in effect.

*Even though the hurricane will be well to the east, the surf will be very rough along the Central Gulf Coast this week, with high rip current danger over the latter half of the week. Expect double red flags by Wednesday. 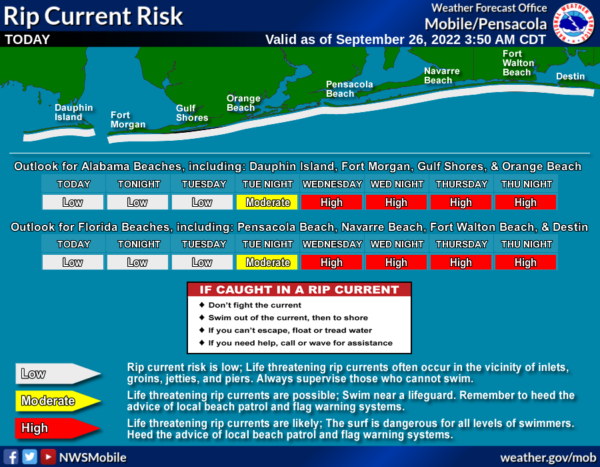 *Regardless of Ian’s exact track and intensity, there is a risk of dangerous storm surge, hurricane-force winds, and heavy rainfall along the west coast of Florida by the middle of this week, and residents in the Florida Peninsula should ensure they have their hurricane plan in place. Follow any advice given by local officials and closely monitor updates to the forecast.

*In the longer term, the eastern half of Alabama could see some rain from the remnants of the system by Friday night and Saturday… but there is a real chance the rain shield associated with Ian will remain east of Alabama. The weekend ahead looks dry and pleasant for most of the state.

*Remember, when you are using old information when it comes to tropical systems, you are working with bad information. Watch for updates over the next few days

ON THIS DATE IN 1898: A school teacher saved 32 children from death in Merritton, Ontario, when she spotted an approaching tornado and led her students to a safe corner. Unfortunately, falling debris killed one of the children and injured several others.

ON THIS DATE IN 1955: On this date, the Atlantic reconnaissance aircraft, ”Snowcloud Five” went down while investigating Hurricane Janet and was never heard from again. Lt. Comdr. Windham with a crew of 8 and two newspapermen reported that they were about to begin penetrating the central core of the hurricane.