ANOTHER COOL START: Here are some temperatures across Alabama just before sunrise…

Sunny weather continues for the rest of the week with highs generally in the 84-87 degree range.

THE ALABAMA WEEKEND AND NEXT WEEK: The long dry spell continues. Lots of sunshine over the weekend with highs in the upper 80s. Then, next week, we project highs at or just over 90 degrees most days as an ridge begins to build across the southern U.S. A few showers could show up over South Alabama late in the week as moisture levels rise, but there is no evidence of any high impact or major rain event for Alabama for the next 7-10 days. See the daily Weather Briefing video for maps, graphics, and more details. 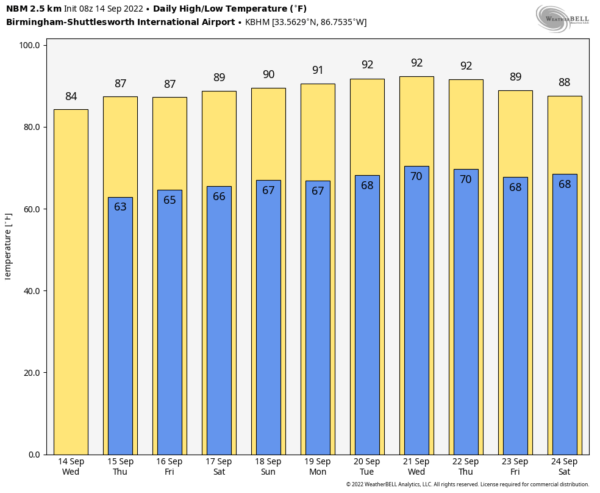 FOOTBALL WEATHER: Clear weather is the story for the high school football games across Alabama Friday night with temperatures falling into the 70s during the games.

TROPICS: NHC is monitoring one tropical wave (Invest 96L) a little less than 900 miles east of the Lesser Antilles. Although environmental conditions are only marginally conducive, some additional development of this system is possible and a tropical depression could form during the next couple of days. IF anything develops there, it will move toward Puerto Rico through the weekend. It could easily dissipate there over the mountainous island of Hispaniola; if anything survives most global models suggests the system will turn northward before impacting the U.S. 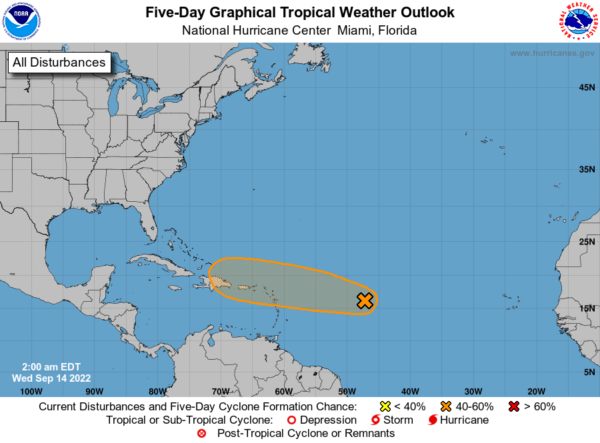 The rest of the Atlantic basin remains unusually calm for mid-September.

ON THIS DATE IN 1928: A violent, estimated F4 tornado, with winds of 200 mph, tore across Rockford, Illinois. The tornado first touched down 8 miles south-southwest of Rockford and moved across the southeast part of the city. The tornado was on the ground for 25 miles with a width varying from 200 to 500 feet. A total of 14 people were killed, with around 100 injuries reported in Rockford alone.

ON THIS DATE IN 2008: Hurricane Ike became extratropical on this day. The St. Louis Metropolitan Area experienced hurricane conditions, with Ike’s remnants inflicting severe damage to homes. Several areas in Illinois and Indiana, already flooded by the frontal boundary to the north, saw significant additional rainfall. Due to flooding in Chicago, a state of emergency was declared for Cook County due to flooding of the Des Plaines River. Hurricane-force wind gusts were reported to the east of the center across parts of Kentucky, Indiana, Ohio, and Pennsylvania with significant wind damage including structural damage to buildings and trees.