COBALT BLUE SKY: Alabama’s weather will remain dry through Friday with sunny pleasant days and clear cool nights. Highs will remain in the mid to upper 70s, with lows mostly in the 50s, but cooler spots will dip into the 40s on most mornings. Picture perfect fall weather.

THE WEEKEND: Ian will likely bring some rain to the eastern half of the state Saturday. Still looks like the best chance of rain will be east of I-65; nothing dangerous or severe, just good ole fashioned rain. Maybe a rumble of thunder in spots. Heavier rain totals near the Georgia border, where around one inch is possible… but the western side of the state might not see a drop. The high Saturday will be in the 72-75 degree range. Sunday will be a dry day with a partly sunny sky along with a high in the mid 70s.

NEXT WEEK: The week looks dry with highs between 78 and 82, and lows around 60. See the daily Weather Briefing video for maps, graphics, and more details.

FOOTBALL WEATHER: For the high school games in the state Friday night, for now the weather looks dry with temperatures falling through the 60s.

Saturday, Alabama travels to Fayetteville to take on Arkansas (2:30p CT kickoff)… the sky will be sunny with temperatures in the low 80s as the game begins. No risk of rain.

Auburn hosts LSU Saturday evening (6:00p CT kickoff) at Jordan-hare Stadium. There is a high degree of uncertainty in the forecast due to the tropical system, but for now it looks like periods of rain are likely with temperatures hovering around 70 degrees during the game. A bit breezy, but the weather won’t be dangerous; just rain. Forecast confidence will increase as we approach the weekend.

UAB will be in Houston to take on Rice (6:30p CT kickoff)… the sky will be clear with temperatures falling from the low 80s at kickoff into the mid 70s by the final whistle.

RACE WEEKEND: Some rain is likely at times Saturday at Talladega, but it won’t rain all day. Then, Sunday is looking dry with a partly sunny sky along with a high in the mid 70s.

*Ian has emerged into the southeast Gulf of Mexico with sustained winds of 120 mph. 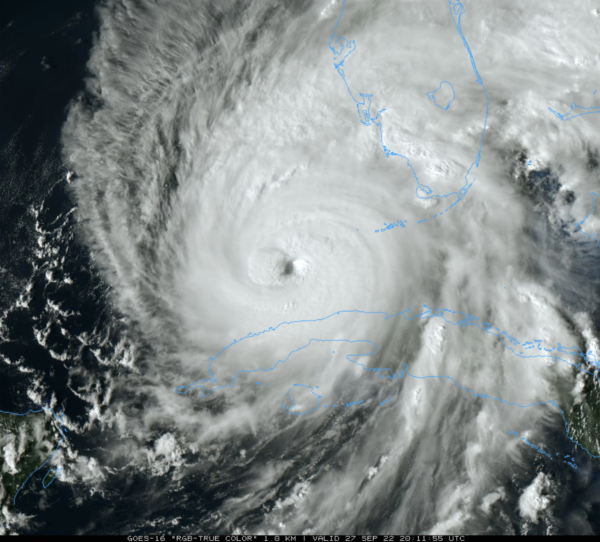 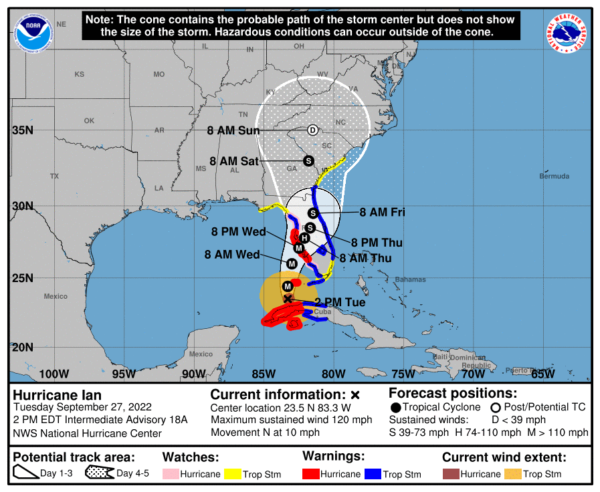 A Hurricane Warning is in effect for…
* Bonita Beach to Anclote River, including Tampa Bay
* Dry Tortugas

A Storm Surge Warning is in effect for…
* Suwanee River southward to Flamingo
* Tampa Bay
* Dry Tortugas
* Marineland to the mouth of the St. Mary’s River
* St. Johns River

*The main impact from Ian will be over the Florida Peninsula, not the Panhandle.

* There has been a notable trend toward the hurricane remaining more intact up through landfall, meaning Ian is likely to turn to the northeast and not move as slowly as previously anticipated. However, it should be emphasized that this track remains very uncertain, with a typical spread in the steering features leading to big speed and track differences down the line, not to mention the oblique angle of approach to Florida. The latest forecast is adjusted to the southeast for this advisory, showing landfall 6-12 hours faster than before. Higher landfall probabilities are now south of Tampa Bay.

*Life-threatening storm surge looks increasingly likely along much of the Florida west coast where a storm surge warning is in effect, with the highest risk from Fort Myers to the Tampa Bay region. Residents in these areas should listen to advice given by local officials and follow evacuation orders if made for your area.

*Hurricane-force winds are expected in the hurricane warning area in southwest and west-central Florida beginning tomorrow morning with tropical storm conditions expected by this evening. Residents should rush all preparations to completion today.

*Heavy rainfall will increase across the Florida Keys and south Florida today, spreading into central and northern Florida tonight and tomorrow, into the Southeast U.S. by Thursday and Friday, likely causing flash, urban, and small stream flooding. Considerable flooding is expected across central Florida into southern Georgia and coastal South Carolina, with widespread, prolonged moderate to major river flooding expected across central Florida.

*While hurricane Ian will stay well to the east, a high rip current danger will continue along the Central Gulf Coast this week. 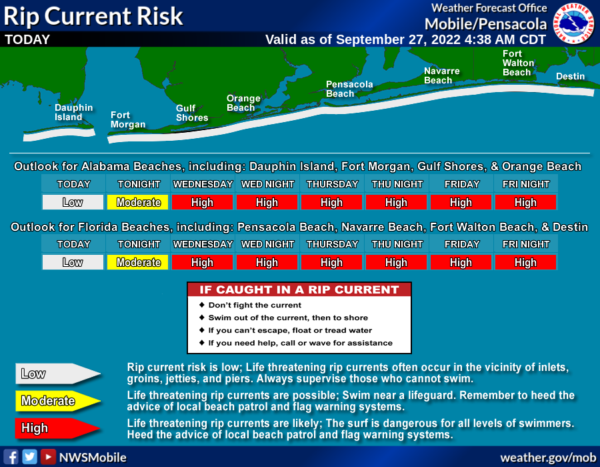 ON THIS DATE IN 1906: The second September storm of 1906 was one of great violence. On the 27th the hurricane reached the central Gulf Coast with destructive winds and unprecedented tides. At Pensacola the tide was 10 feet above normal. At Mobile, property damage was severe. An estimated 134 lives were lost from Pensacola to Mississippi from this storm.

ON THIS DATE IN 1985: Hurricane Gloria swept over the Outer Banks then rushed across Long Island, New England, and Canada. It was the first significant hurricane to hit New England in twenty-five years and brought heavy rains and high winds to the Mid-Atlantic states as well.