CLEARING: The sky has cleared over the northern third of the state this afternoon where the sun is out in full force, but clouds linger over the central and southern counties, where some scattered light rain is still in progress. Rain will end this evening, and the sky becomes mostly fair statewide tonight. There is a chance we see some dense fog after midnight with a clear sky, light wind, and wet ground. 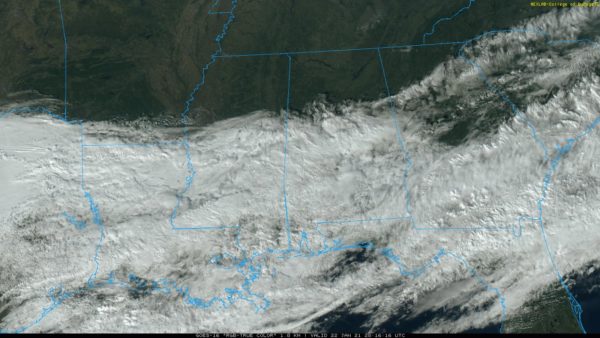 THE ALABAMA WEEKEND: The sky will be mostly sunny statewide tomorrow; highs will be in the 50s over the northern half of the state, with 60s for South Alabama. Clouds increase tomorrow night, and Sunday will be a mostly cloudy day with a chance of showers, mainly north of I-20 (Tuscaloosa to Birmingham to Anniston). But, a decent part of the day should be dry with a high in the low 60s.

NEXT WEEK: A deep surface low will set up northwest of Alabama Monday, and with temperatures rising into the low 70s the air becomes unstable by afternoon. This setup will bring a round of showers and thunderstorms to the state; for now the severe weather threat looks fairly low due to weakening upper dynamics and wind fields. Rain amounts will be around 1/2 to 1 inch for most communities, and the rain ends Monday night.

Tuesday will be a dry day with a high in the 60s, but the next weather system will bring some rain to the state late Tuesday night into Wednesday. Dry air returns Thursday and Friday; highs will be in the 50s over the latter half of the week.

Still no sign of any bitterly cold air or winter weather issues for Alabama into early February. See the Weather Xtreme video for maps, graphics, and more details.

ON THIS DATE IN 1904: An unusual estimated F4 tornado leveled the northern part of Moundville, in Hale County, just after midnight, killing 37 people. The tornado reportedly had a phosphorescent glow. Luckily, a northbound train pulled into Moundville very soon after the tornado occurred. The engineer, seeing what had happened, put his locomotive in reverse and raced all the way backwards to Akron where he sent a telegraph message to Tuscaloosa appealing for help. Doctors from Moundville, Tuscaloosa and Birmingham worked for two days treating the injured in temporary hospitals that were set up on Dr. Griffin’s back porch and at the Elliott store. That was the only store left standing. A newspaper reporter from the Birmingham paper traveled by train to write about the tornado. An infant was snatched from its crib in the lower part of town and hurled through the air. It was airborne as it passed over the demolished stores. It was deposited unijured in an old cotton field more than 100 yards away.