COOL, DRY DAY AHEAD: The system that brought rain to Alabama over the weekend has lifted out, and lingering clouds will give way to a sunny sky across Alabama today with highs in the 50s, right at seasonal averages for January. Tonight will be fair and cold with lows below freezing over the northern 2/3 of the state.

HIGH IMPACT SYSTEM AHEAD: Tomorrow will be partly sunny, but clouds increase late in the day and of a dynamic weather system that will bring rain, wind, and storms to Alabama late tomorrow night into early Wednesday morning.

SPC has defined an “enhanced risk” (level 3/5) of severe thunderstorms for the southwest corner of Alabama, and a “slight risk” (level 2/5) as far north as Linden, Selma, and Troy. A “marginal risk” extends as far north as Birmingham, but severe storms are not expected over the northern half of the state. 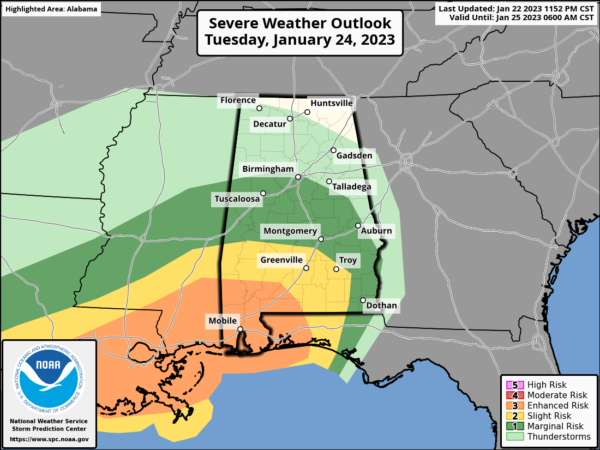 THREATS: Storms across Southwest Alabama, and along the Gulf Coast tomorrow night could produce damaging winds and a few tornadoes. A strong tornado (EF-2 or higher) is possible as well. Some hail could fall from stronger storms. The main tornado threat is in the enhanced risk, including Mobile, Baldwin, Washington, Clarke, Monroe, Conecuh, and Escambia counties. There will be basically no surface based instability over North/Central Alabama, which will prevent a tornado threat there.

GRADIENT WIND: Gradient winds (not related to thunderstorms) are a concern statewide. Winds could gust to 40 mph in spots tomorrow night, maybe 50 mph on ridges.

TIMING: The main window for the wind, rain, and storms will come from around midnight tomorrow night through 8:00 a.m. Wednesday.

RAIN: Rain amounts will be around 1 inch, with isolated heavier amounts possible. For now flooding issues are not expected.

Rain will end from west to east very early Wednesday morning, but clouds will likely linger much of the day with temperatures in the 50s.

THURSDAY/FRIDAY: Colder air will drop into Alabama Thursday. A few snow flurries are possible over Tennessee Valley, but if we see a snow flake or two temperatures will be above freezing and there won’t be any impact. The high Thursday will be only in the 40-45 degree range over North Alabama, with 50s over the southern counties. Friday will feature a good supply of sunshine with seasonal temperatures.

THE ALABAMA WEEKEND: Saturday will be dry with highs in the 50s and 60s, but a disturbance has potential to bring rain back into the state Sunday. Highs on Sunday will be in the 50s.

NEXT WEEK: The week looks a bit unsettled with rounds of rain possible Tuesday through Thursday; for now we see no evidence of any severe thunderstorm threat. See the daily Weather Briefing video for maps, graphics, and more details. 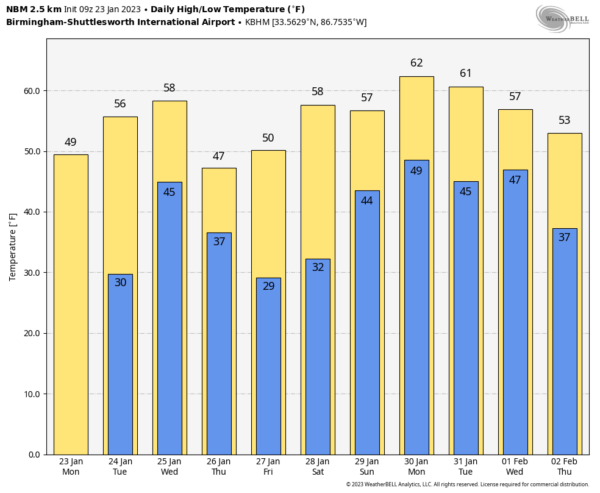 ON THIS DATE IN 1969: An F4 tornado cut a 120-mile long path from Jefferson through Copiah, Simpson, Smith, Scott, and Newton Counties in Mississippi, killing 32 and injuring 241 others. Property damage was estimated at $2 million. An inbound Delta Airlines aircraft reported a hook echo on its scope with this storm.

ON THIS DATE IN 2012: A total of eleven tornadoes touched down in Alabama ten years ago today, mostly during the pre-dawn hours. One person was killed by an EF-2 tornado near Oak Grove, in western Jefferson County.

The strongest tornado of the event (an EF-3) moved through Center Point, and parts of Clay and Trussville; a 16 year old girl was killed, and 75 others were injured. A total of 231 homes and businesses were damaged or destroyed. The tornado damage path was approximately 15.5 miles long and was 880 yards wide at its widest point.