RADAR CHECK: Most of Alabama is now rain-free at mid-afternoon. We had strong to severe storms near the Gulf Coast much of the day, which disrupted the inflow of Gulf moisture into the central part of the state, preventing the formation of strong storms. Thunderstorms did move across the Tennessee Valley earlier this afternoon with some hail and strong winds.

Strong pressure gradient winds (not related to thunderstorms) have been gusting to 35/40 mph in spots this afternoon; a few trees have been blown down and we have scattered power outages. Winds will settle down once the sun goes down later this evening. Tonight will be mostly fair and cool with a low in the 50s.

MOTHERS DAY WEEKEND: Some clouds will rotate into North Alabama tomorrow around the upper trough over the eastern third of the nation, but the day will be dry and cooler with a high in the 70-75 degree range. Sunday will be a delightful day with ample sunshine along with a high around 80 degrees.

NEXT WEEK: Dry weather is the story Monday through Thursday with a warming trend… temperatures will be close to 90 degrees by Wednesday and Thursday. We could see a few showers Friday as moisture moves in from the east, but nothing really widespread or heavy is expected for now. See the Weather Xtreme video for maps, graphics, and more details. 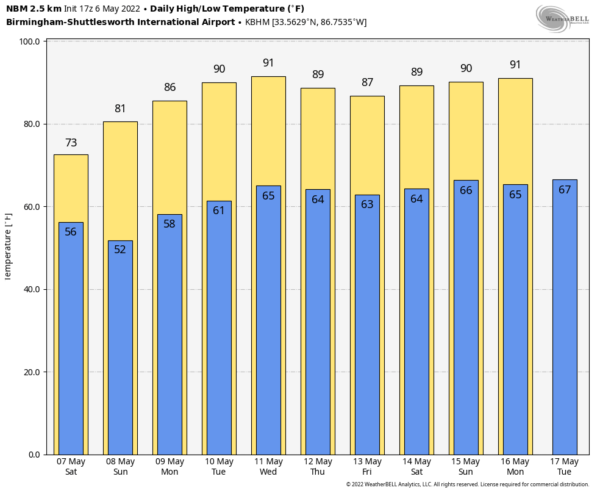 ON THIS DATE IN 1967: An F2 tornado tore through the western part of Birmingham. A 57 year old woman who was visiting her daughter on First Court West as she watched the tornado from the front door. She was killed when 2×12 timbers launched airborne from a nearby lumber yard was hurled into the house. Birmingham Deputy Fire Chief Neal Gallant watched the storm as it tore down Lomb Avenue. A five block area near the Fairgrounds was hardest hit. The GES department store near Rickwood Field was heavily damaged. Over two dozen people were injured, and the tornado lifted just before moving into the downtown area.

ON THIS DATE IN 1975: A massive tornado hit Omaha, Nebraska killing three persons, injuring 133 others, and causing over 250 million dollars damage. The tornado struck during the late afternoon moving northeastward through the industrial and residential areas of west-central Omaha and lifting over the northern section of the city.