COLD MORNING: Temperatures are mostly in the 30s over the northern half of the state this morning; some spots are below freezing. Some temperatures just before daybreak….

Today will be a sunny, cool day with a high only in the upper 50s for most communities; the average high for Birmingham on November 2 is 70. Tonight will be another cold one; some some temperatures early tomorrow morning will be colder than we are seeing this morning thanks to the wind going calm. So, colder spots over the northern half of the state will see another freeze early tomorrow, with some frost as well.

A warming trend begins tomorrow afternoon; with sunshine in full supply we see a high in the mid 60s.

WEDNESDAY THROUGH FRIDAY: The weather stays dry. Sunny pleasant days, clear cool nights. Highs generally between 71 and 75, with lows mostly in the 40s.

THE ALABAMA WEEKEND: There will be some increase in moisture Saturday, but we will keep the forecast dry for now. The sky will be partly sunny with a high in the mid 70s. Not much change Sunday; dry and mild with a high between 74 and 77 degrees.

NEXT WEEK: Showers could possible return to the state over the latter half of the week as a cold front approaches; too early to be specific on timing, or the amount of rain we experience. See the Weather Xtreme video for maps, graphics, and more details.

TROPICS: Hurricane Eta, now with 75 mph winds will move into the coast of Nicaragua tonight. It will move slowly through Central America through Friday, and will bring potential for life threatening flooding. 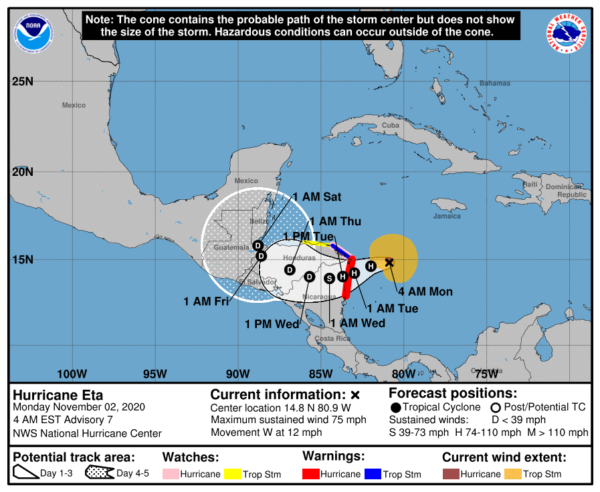 We note that both major global models suggest the core of Eta could survive the journey over land this week, the emerging back over the western Caribbean this weekend. Then, there is some potential for reorganization/intensification next week near the Yucatan Channel. We can’t rule out entry into the southern Gulf in 7-10 days, but there is no skill at a specific forecast that far out. Just something to watch for now.

ON THIS DATE IN 1743: Benjamin Franklin’s “Eclipse Hurricane” unlocked the key to storm movement. The storm became know as the ‘Eclipse Hurricane’ because it struck on the night of a lunar eclipse. Benjamin Franklin was residing in Philadelphia and was set to make observations of the predicted eclipse, but the clouds from the storm interfered. Franklin observed that the winds accompanying the storm were from the northeast and assumed the storm had come from that direction and so had also interfered with lunar observations made by his brother back in Boston. He was surprised to later find that the eclipse had been visible in Boston and that the storm had struck there hours afterward. Franklin concluded the storm had moved contrary to surface winds. His observations were confirmed by another hurricane which traveled up the east coast of the Colonies in October of 1749, which Franklin was able to trace by using newspaper accounts from various cities along the storm course.

Look for the next Weather Xtreme Video here by 4:00 this afternoon… enjoy the day!