DRY & WARM FOR CENTRAL ALABAMA THIS WEEKEND
With a boundary stalled out over the southern portions of Tennessee, we’ll have a mix of clouds across Central Alabama for your Saturday. No rain is expected across our area, but a few showers may be possible along and north of the Tennessee River in North Alabama. Highs will range from the lower 80s in the northwest to the mid-80s in the southeast.

Much of the same for Sunday, but the boundary will drift back northward before our next system begins to move into the area before sunrise on Monday morning. Skies will be partly to mostly cloudy with highs reaching the upper 70s to the lower 80s.

A STORMY START TO THE WORK WEEK
We’ll have a front move through the area throughout the day on Monday that will bring us rain and thunderstorms mainly during the morning, but those look to begin to weaken and dissipate somewhat throughout the afternoon and evening hours. Instability will exist over the western half of the area with the higher levels closest to the Mississippi/Alabama state line. At this point, isolated damaging wind gusts up to 60 MPH and hail up to quarter size will be the potential threats, but an isolated brief tornado may be possible. Highs will be in the mid-70s to the lower 80s. We’ll get a better look at the system when the higher-resolution models come into play.

That front becomes more horizontal across Central Alabama that will keep a chance of showers and a few thunderstorms in the forecast throughout the day on Tuesday. No severe weather is expected at this time. Highs will be in the lower 70s to the lower 80s.

STRONG TO SEVERE STORMS POSSIBLE ON WEDNESDAY
Wednesday will be a day we’ll need to watch as we may have two waves of rain and storms to put up with. During the early morning hours, we’ll have the stalled out cold front move back northward through the state as a warm front. We could have some strong to severe storms form along that front that may produce damaging wind gusts and some hail. 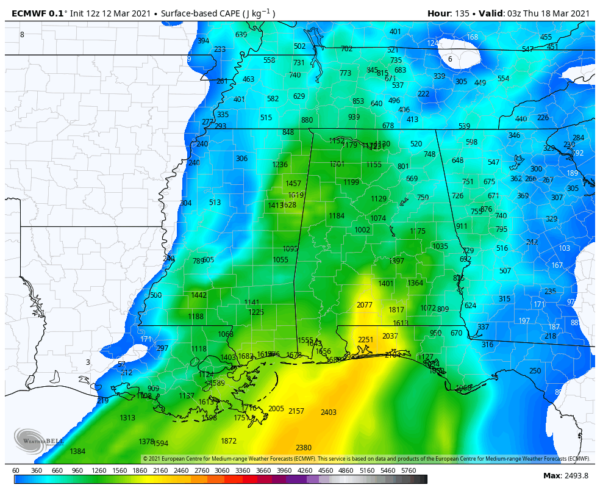 Showers and storms will become more scattered throughout the late morning through the afternoon hours, but instability will be rising well above 1,000 J/kg. The crossover of winds from the surface up to 18,000 feet show that there will be veering of winds from the south to the east, which will help promote rotating updrafts. At this point, all modes of severe weather look to be possible, but let’s get through Monday’s event, so we can really focus on Wednesday. Highs will be in the upper 60s to the upper 70s, with dewpoints topping out in the lower to mid-60s.

A QUIETER & COOLER END TO THE WORK WEEK
After the front and rain moves out of the area during the early morning hours on Thursday, skies will begin to clear, but winds will remain quite breezy at times. Afternoon highs will be back down into the lower 60s to the lower 70s across the area.

Friday will be cooler even with more sunshine and only a few passing clouds. Highs will be in the upper 50s to the upper 60s across the area from northwest to southeast. 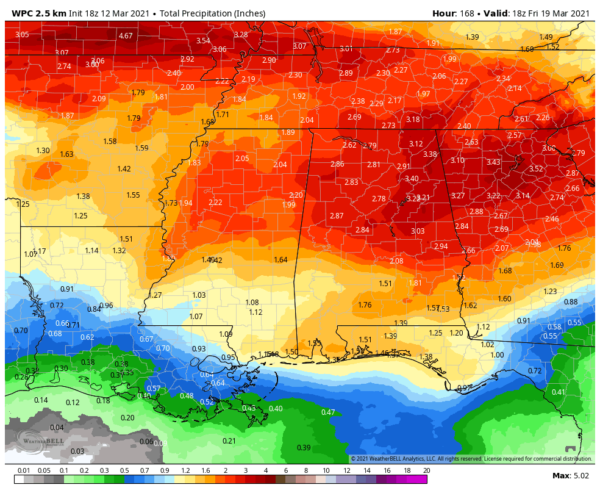 RAINFALL FOR THE SEVEN-DAY FORECAST
The latest numbers in from the WPC show that we could see anywhere from 1.50 inches in the southwest to as much as 3.50 inches in the northeast from Saturday morning through Friday at 1:00 pm. 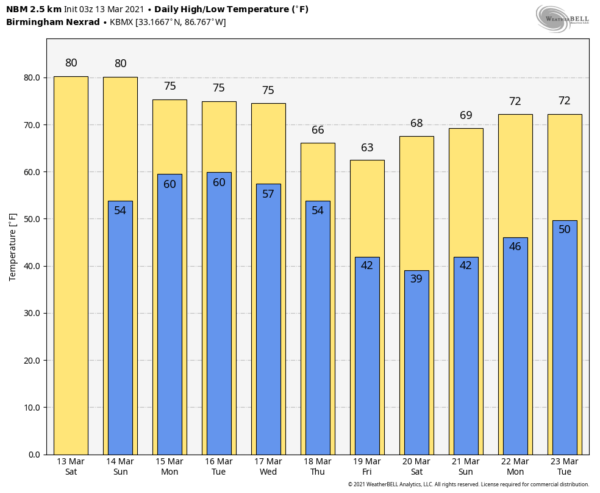 TEMPERATURE OUTLOOK
While temperatures will take a little dip back down into the upper 50s to the upper 60s by Friday, we go back into a warming trend with temperatures back up into the 60s and 70s by Tuesday, March 23rd.

ON THIS DAY IN WEATHER HISTORY
1993 – The “Great Super Storm Blizzard of ’93” clobbered the eastern U.S. on this day and produced perhaps the largest swath of heavy snow ever recorded. Heavy snow was driven to the Gulf Coast with 3 inches falling at Mobile. 13 inches blanketed Birmingham, Alabama to set not only a new 24-hour snowfall record for any month, but also set a record for maximum snow depth, maximum snow for a single storm, and maximum snow for a single month. Tremendous snowfall amounts occurred in the Appalachians. Mount Leconte in Tennessee recorded an incredible 60 inches. Mount Mitchell in Tennessee recorded an incredible 60 inches. Mount Mitchell in North Carolina was not far behind with 50 inches. Practically every official weather station in West Virginia set a new 24-hour record snowfall.

7:00 AM | *Low pressure intensifies along the coastline later today and tonight* — Perspecta Weather