The winds are really blowing right now in central Puget Sound but are from an unusual direction:  easterly (from the east).

Looking at the infrared satellite image for 5 PM today, you would expect lots of precipitation reaching the surface over western Washington, but only a few sprinkles have hit from Everett to Tacoma.

This lack of precipitation i confirmed by the radar image at that time (see below).  And it was even precipitating and SNOWING on the coast.  How weird is that?  In fact, it IS snowing above us right now, but the snowflakes are evaporating before they reach the surface.  They don’t have a chance. 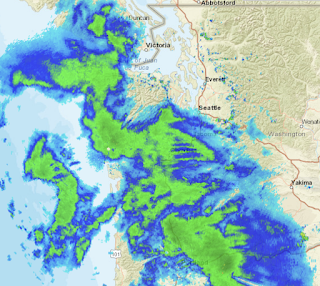 The explanation is the easterly flow, produced by a strong low-pressure center off our coast (see weather map at 4 PM below).  With high pressure inland and low pressure offshore, a powerful offshore directed pressure difference is in place, producing strong easterly winds. 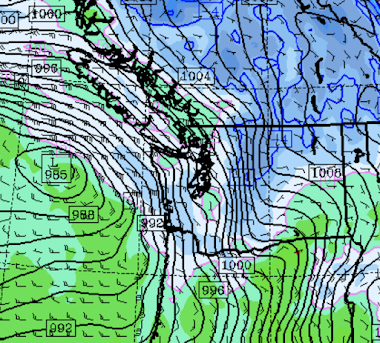 How strong?  Here is the plot of wind direction and gusts (red numbers) around the region (click on image to expand).  Some locations are gusting to 40-50 mph. 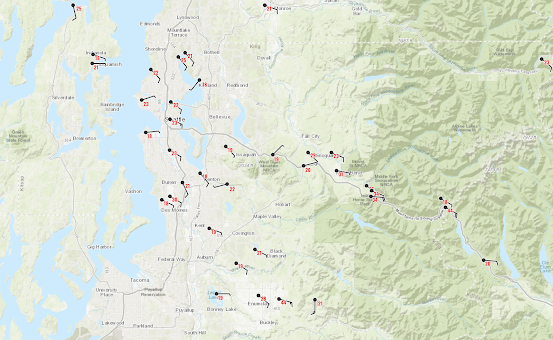 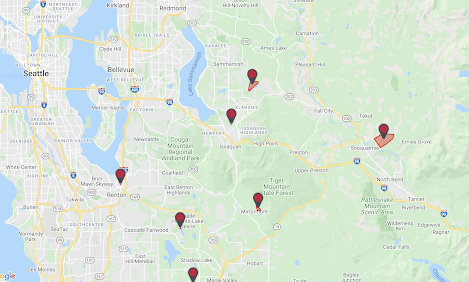 But the most interesting aspect of the winds is their dryness.  Dry because they are associated with air that is SINKING and warming on the western slopes of the Cascades.

To illustrate, consider the conditions on the top of my building at the UW (below).

Around 1 PM (21z at the bottom), the winds started to pick up (see letter A), with gusts to 25 knots!  Wind direction was due east (second panel).

The third panel is the interesting one…the top (black) line is temperature and the bottom is dew point (a measure of moisture).  Temperature rose, but dew point fell (letter B).  The bigger the difference between the two, the drier the air.

Take a look at the fourth panel that shows relative humidity.  Mama Mia!  Relative humidity plummeted from around 80% to under 50%.  Dry air.  No wonder I got a shock when I touched a door knob.

The weather system offshore and the associated front (apparent in the satellite picture) are producing lots of snowflakes and ice crystals aloft.  But they are sublimating (what evaporation from ice is called) and disappearing before they reach the surface.

Sometimes, this kind of downslope wind is called a Chinook (or snow-eater) wind.

It is certainly having a feast with the snow above us right now.