RADAR CHECK: Some patchy light rain persists across parts of Northeast and Central Alabama this afternoon ahead of a very slow moving surface front; the sky has cleared northwest of Birmingham where dry air has taken over. Temperatures are only in the 70s in most places over the northern half of the state; clouds will move out tonight, and tomorrow promises to be a very nice day with ample sunshine and a high in the mid 80s. Then, on Sunday, we are forecasting a partly sunny sky with only a few isolated showers around… the high Sunday will be in the upper 80s.

NEXT WEEK: There will be some risk of isolated showers on most days, but odds of any one spot getting wet will be in the 10-30 percent range. Look for partly sunny days, fair nights, and highs at or just over 90 degrees on most days. No sign of any major, widespread rain event for Alabama for the next 7-10 days with an upper ridge holding across the region. See the Weather Xtreme video for maps, graphics, and more details. 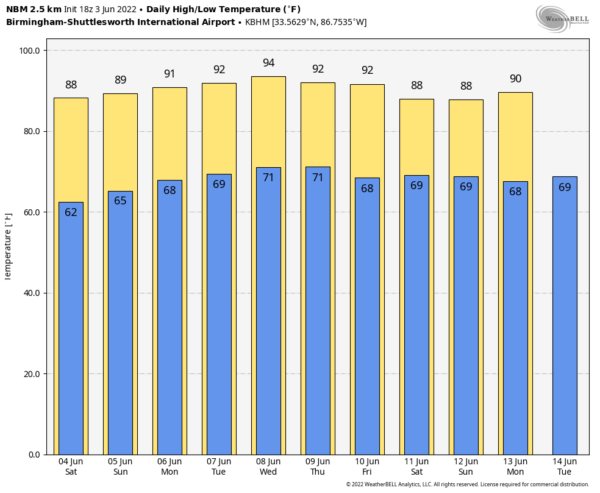 TROPICS: The disturbance in the southern Gulf of Mexico still does not have a closed circulation as of 3:00 p.m. It is moving toward the northeast near 5 mph, and this general motion is expected to continue with an increase in forward speed starting later today. On the forecast track, the system should move across the southeastern Gulf of Mexico through tonight, across the southern and central portions of the Florida Peninsula on Saturday, and then over the southwestern Atlantic north of the northwestern Bahamas Saturday afternoon through Sunday.

Maximum sustained winds are near 40 mph with higher gusts. The system is expected to develop a well-defined center and become a tropical storm later today, and some slight strengthening is possible while it approaches Florida today and tonight. Additional strengthening is possible after the system moves east of Florida over the western Atlantic late Saturday and Sunday.

The main U.S. impact will be heavy rain for South Florida; heavier totals will be south of I-4 (5-10 inches). Also, a few isolated tornadoes will be possible. All of this is far south of the Central Gulf Coast (Gulf Shores to Panama City Beach). 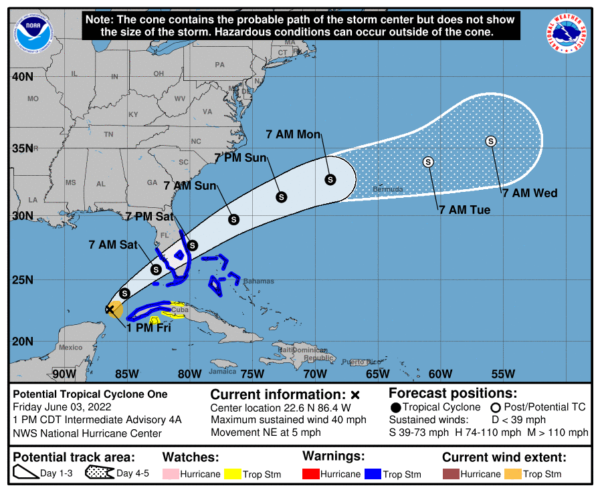 Another disturbance is in the open Atlantic west-southwest of Bermuda; shower and thunderstorm activity has changed little in organization associated with the small but well-defined area of low pressure about 200 miles west-southwest of Bermuda. This system has a brief window for further development today before strong upper-level winds result in increasingly unfavorable conditions by the weekend. This system is expected to move generally eastward passing southward of Bermuda this weekend.

ON THIS DATE IN 1993: Early morning severe thunderstorms dumped huge hailstones across northern Oklahoma. Hail, up to 6 inches in diameter in Enid, went through roofs of homes, damaged three jets at Vance Air Force Base, and did $500,000 in damage at a car dealership. Winds gusts reached 70 mph at Vance Air Force Base as well. Hail damage to the wheat crop was estimated at 70 million dollars.