NICE WARM-UP TODAY: With sunshine in full supply, temperatures will rise into the mid 70s across Alabama today, right at seasonal averages for mid-April in Alabama. The warming trend will continue for the rest of the week and the weekend… look for a high around 80 tomorrow, followed by low to mid 80s Friday, and mid 80s Saturday and Sunday. An upper ridge will keep rain producing systems northwest of Alabama; expect mostly sunny days and fair nights.

NEXT WEEK: A cold front will bring a few showers into the state Monday afternoon and Monday night, but amounts should be light and spotty with limited moisture and dynamic support. The rest of next week looks dry and cooler with highs mostly in the mid to upper 70s. No sign of any severe weather threats for Alabama for the rest of April. See the Weather Xtreme video for maps, graphics, and more details. 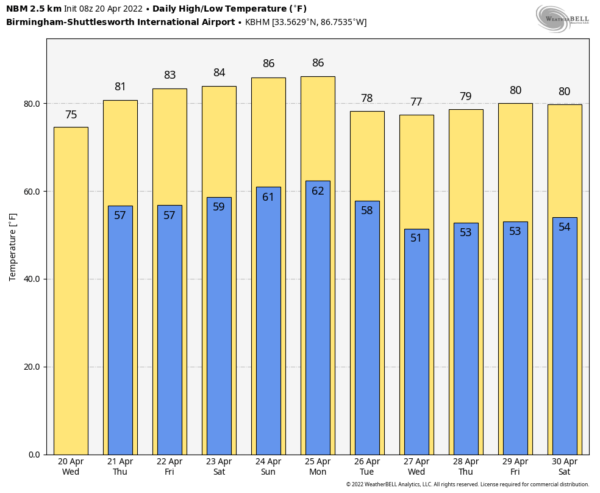 ON THIS DATE IN 1920: A three-day severe weather event affected the Southeastern United States. The most intense portion of the outbreak occurred on the morning of April 20. At least seven tornadoes affected Mississippi, Alabama, and Tennessee, six of them rated violent F4s on the Fujita scale. The tornado outbreak killed at least 243 people.

One of the most violent tornadoes touched near Starkville, MS, and stayed on the ground until a point near the Alabama/Tennessee border. In Alabama, it leveled entire farms south of Bexar, with nine deaths. One farm alone reported 500 hogs killed. In Marion County alone, the 1/2-mile-wide tornado killed 20 people and injured about 200, leveling 87 homes and damaging 100, especially in the Hackleburg area. In Franklin County, the tornado continued to destroy homes near Phil Campbell and Spruce Pine, but most of the deaths were near the Waco quarry, east of Russellville, where small homes were said to have been “wiped out” and swept away. 19 people died in and near the quarry, nine of whom were part of a family.