ONE MORE NICE DAY: Temperatures will rise well into the 60s again today with a partly sunny sky. But, this will be the last dry day of the week, and clouds will thicken across the state tonight.

Rain will move into the state tomorrow as moisture surges northward from the Gulf of Mexico. Periods of rain will continue through tomorrow night. Then, on Thursday, we will maintain the chance of scattered showers, but another round of widespread rain is likely Thursday night into Friday morning. The best chance of rain will shift down into South Alabama by Friday afternoon.

Some thunder is possible, and SPC has introduced a low end “marginal risk” (level 1/5) of severe thunderstorms for Southwest Alabama. Storms there could produce strong gusty winds, but for most of Alabama severe storms are not expected. 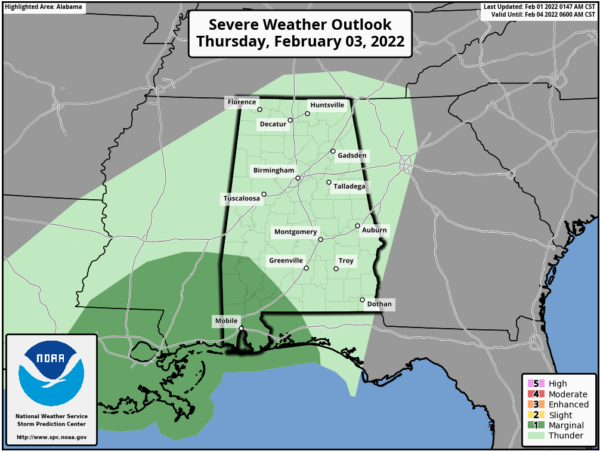 Rain amounts of 1-3 inches are likely between tomorrow and Friday; some minor flooding issues could crop up, widespread flooding problems are not expected. The high tomorrow will be in the 58-62 degree range, followed by upper 60s Thursday. A few spots could touch 70 degrees Thursday afternoon… it will be the warmest day of the week. Much colder air returns Friday; some North Alabama communities will hover in the upper 30s and low 40s.

TO THE NORTH: A major winter storm will unfold from Texas northern New England over the next few days; heaviest snow will fall across parts of Missouri, Illinois, and Indiana… freezing rain and ice accumulation is possible as far south as Arkansas and West Tennessee. This wintry precipitation will stay just north of Alabama. 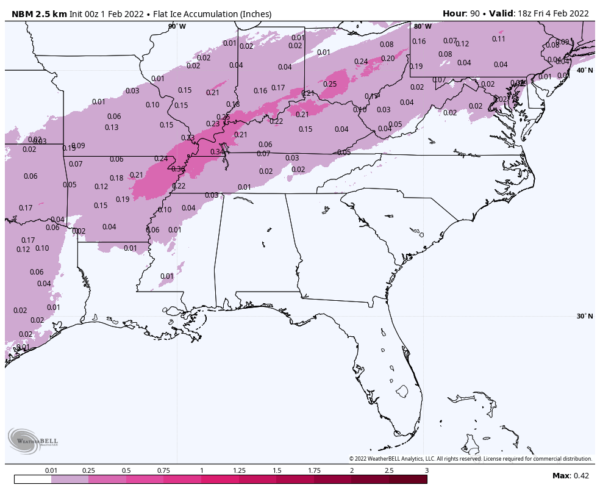 THE WEEKEND: Saturday will be mostly cloudy but dry for the northern half of the state… any rain will be over the southeast counties. The high Saturday afternoon will be near, or just over 50 degrees. Then, we will bring in a chance of some light rain statewide Saturday night into Sunday morning. It isn’t totally out of the question for a few snow flakes over the northern third of the state Sunday morning with colder air in place, but for now no accumulation or impact is expected. Clouds will linger through the day Sunday with a high again around 50 degrees.

NEXT WEEK: For now much of next wee is looking dry with seasonal temperatures… highs mostly in the 50s and lows in the 30s. See the Weather Xtreme video for maps, graphics, and more details. 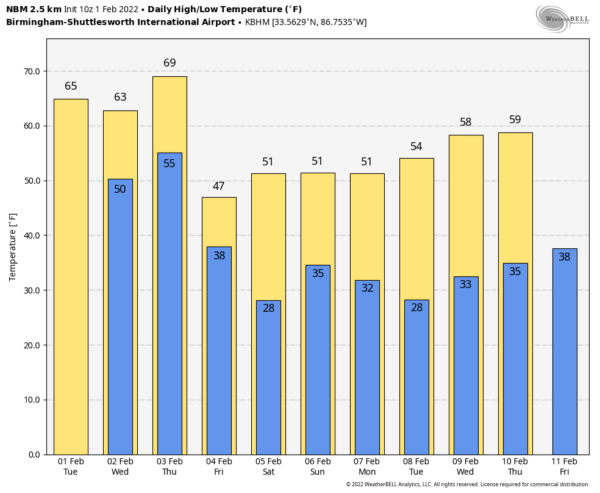 ON THIS DATE IN 1955: Seen first as a “well-defined cone-shaped funnel” over the Mississippi River, this F3 tornado cut a path from Commerce Landing to Clark in northeastern Mississippi. This tornado killed 20 and injured at least 141 individuals. Most of the deaths were in a plantation school.

ON THIS DATE IN 1966: A snow/ice event was underway in Alabama. A period of freezing rain followed by light snow brought traffic to a complete standstill across North Alabama. Ice accumulations up to 1 inch downed numerous trees and caused power outages. A number of chicken houses in the northern part of the state collapsed under the weight of the ice and snow. Ice and snow accumulations varied widely with some of the highest amounts reported in the 1 to 3 inch range.

ON THIS DATE IN 2011: One of the most significant events of the 2010-2011 winter season affected a widespread region from Texas to the Midwest and Northeast from February 1st to 3rd 2011. The system produced widespread heavy snow with blizzard conditions and significant freezing rain and sleet to other locations. Snowfall amounts of 10 to 20 inches were common from northeast Oklahoma to lower Michigan. The storm produced 20.2 inches at Chicago, the third heaviest snowfall in the city since their records began in 1886, along with a peak wind of 61 mph.