FOGGY START: A dense fog advisory is in effect for much of North/Central Alabama early this morning, including places like Birmingham, Tuscaloosa, Anniston, and Gadsden… that fog will dissipate by mid-morning. Otherwise, we expect a mostly sunny day ahead with a high around 90 degrees for most communities. Any showers will be confined to the far southern part of the state, and even there most places will be dry. Humidity values will be lower making for a more comfortable day.

Tonight will be clear and very pleasant… some of the cooler spots across North Alabama will dip into the 58-63 degree range early tomorrow; most places will be in the mid 60s. The sky will stay mostly sunny tomorrow with a high at or just over 90 degrees.

FRIDAY AND THE LABOR DAY WEEKEND: Moisture begins to return Friday, and we will have some risk of scattered showers and storms by afternoon. Then, a deep pool of moisture will settle into the state over the Labor Day weekend. The sky will be occasionally cloudy Saturday through Monday with scattered to numerous showers and thunderstorms each day. Understand this doesn’t mean a “washout”… the sun will be out at times, but be ready for occasional showers and a few storms. Most (but not all) of the showers will come from about noon to midnight each day, and highs will be in the mid 80s.

NEXT WEEK: Showers should become fewer in number over the latter half of next week as the air becomes a little drier; highs will be mostly in the mid 80s. See the daily Weather Briefing video for maps, graphics, and more details. 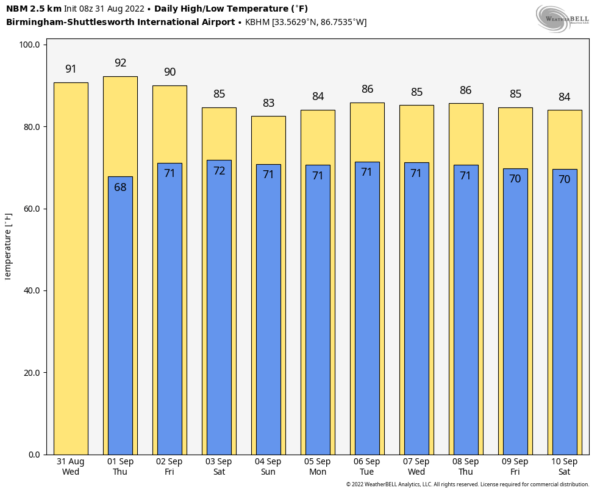 TROPICS: NHC is monitoring three tropical waves in the Atlantic; all three have a medium to high chance of becoming a tropical depression or storm over the next five days, but none of them will impact the U.S. Still no sign of any tropical storm or hurricane threat for the Gulf of Mexico or the U.S. for at least the next 7 to 10 days.

Since 1950, only two Augusts have had no Atlantic named storm formations: 1961 and 1997. And 2022 will join that list after today. FYI, 1961 ended up a hyperactive hurricane season with an extremely busy September-November, while 1997 was a below-average season. 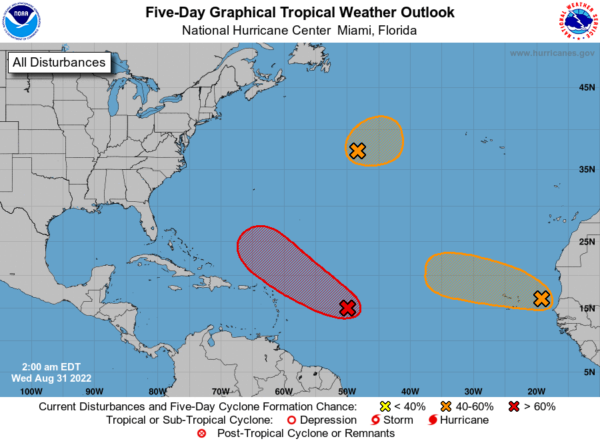 ON THIS DATE IN 1935: The most intense hurricane to make landfall was a modest tropical depression on this day. Called the Labor Day Hurricane, this storm went through phenomenal intensification to become a Category 5 hurricane by September 2nd.

ON THIS DATE IN 1954: Hurricane Carol came ashore on the coast of Newport, RI with a massive surge and winds of 115 mph. In one hour, Carol destroyed 3,800 homes, sank or damaged 2,000 boats and yachts, and leveled almost all of the island’s powered and telephone lines.