ON THE MAPS: A cold front is nearing U.S. 80 this morning; a band of showers persists ahead of the front. Those showers will continue to drift slowly southward today, and a few stronger storms are possible later across the southeast part of the state, where SPC has defined a “marginal risk” (level 1/5) of severe thunderstorms. Some of the heaver storms later today could produce gusty winds and some hail. 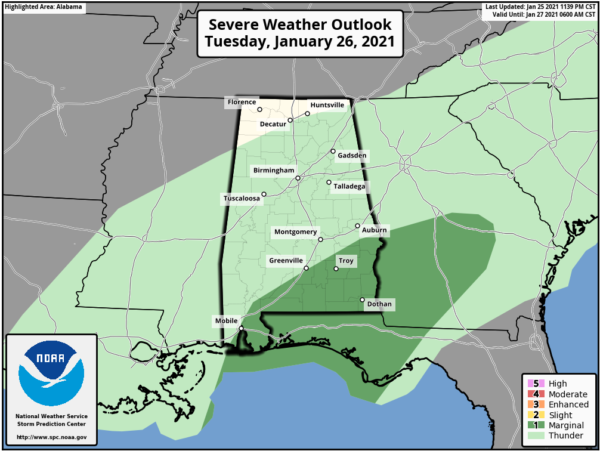 For the northern half of the state, the day will feature a mix of sun and clouds with a high in the 65-70 degree range. Clouds will increase later today as a wave of low pressure develops along the front to the west.

Rain returns statewide late tonight and into a part of the day tomorrow; no risk of severe storms, and rain amounts should be under 1/2 inch. As that rain ends tomorrow, colder air drops into the state. Temperatures will likely fall into the 40s over North Alabama by afternoon with a brisk north wind. The sky will clear tomorrow night.

THURSDAY/FRIDAY: These day feature a good supply of sunshine with cold mornings. The low early Thursday will be close to 30, and we expect mid 20s early Friday. The high Thursday will be in the 47-51 degree range, followed by mid 50s Friday.

THE ALABAMA WEEKEND: Saturday will be dry with a high around 60 degrees; we start the day with sun followed by increasing clouds by afternoon. The next weather system will bring a batch of rain and possibly a few thunderstorms to the state Saturday night, followed by a clearing sky Sunday afternoon. For now severe storms don’t look likely with the weekend system, but we will keep a close eye on it in coming days.

NEXT WEEK: The weather will be dry for much of the week with seasonal temperatures… highs in the 50s and lows in the 30s. Next chance of rain will likely come Thursday night into Friday… See the Weather Xtreme video for maps, graphics, and more details.

ON THIS DATE IN 1772: Possibly the greatest snowfall ever recorded in Washington started on this day. When the storm began, Thomas Jefferson was returning home from his honeymoon with his new bride, Martha Wayles Skelton. The newlyweds made it to within eight miles of Monticello before having to abandon their carriage in the deep snow. Both finished the ride on horseback in the blinding snow. The newlyweds arrived home late on the night of January 26th. In Jefferson’s “Garden Book,” he wrote “the deepest snow we have ever seen.