RADAR CHECK: Scattered showers and thunderstorms continue to develop across Alabama this afternoon… they are most numerous west of I-65, and are dropping southward. Otherwise, we have a mix of sun and clouds with a temperatures mostly in the mid 80s. Showers will fade tonight after sunset. 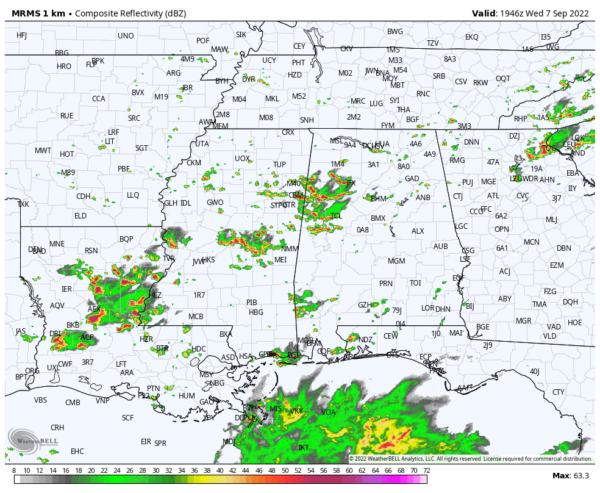 Drier air rolls into Alabama tomorrow, and most of the state will be dry… we expect just a few scattered showers over the far southern part of the state. The sky will be partly to mostly sunny with a high in the 84-87 degree range.

FRIDAY AND THE WEEKEND: Rain becomes fairly widespread across the state Friday as deep moisture surges northward, and a broad surface low forms over South Louisiana. Look for periods of rain and a few thunderstorms, and the rain could be heavy in spots, possibly bringing some flooding issues. Temperatures will hold in the 70s all day Friday thanks to clouds and showers.

Then, for the weekend, the sun should peek out at times, but the weather will stay somewhat unsettled with occasional showers and a few thunderstorms Saturday and Sunday. The high will be in the low to mid 80s, and the chance of any one spot seeing rain both days is 60-70 percent. Of course, no way of knowing in advance exactly when and where the showers form, but if you will be attending an outdoor event have the rain gear handy.

NEXT WEEK: Showers remain possible Monday over East and South Alabama, but a very nice push of dry, continental air rolls into Alabama Tuesday, setting the stage for some very nice weather for the rest of the week with sunny days, fair nights, and lower humidity levels. Many places will drop into the 50s early Wednesday morning; it will be the coolest morning so far this season. Highs will be in the 80s through the week… See the daily Weather Briefing video for maps, graphics, and more details. 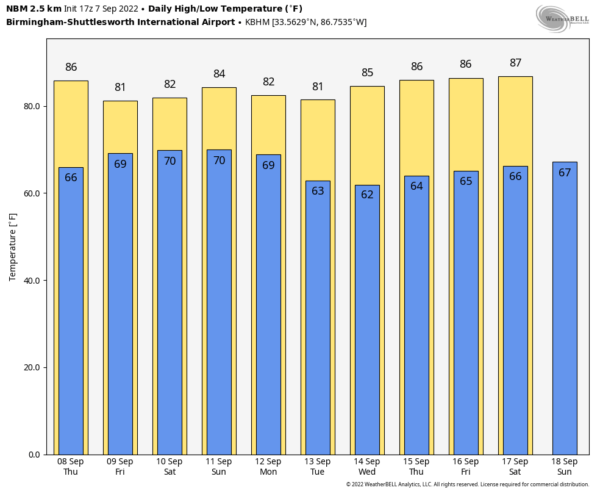 TROPICS: We have two hurricanes in the Atlantic; Danielle and Earl. Danielle is in the North Atlantic (with 80 mph winds), and will become post tropical soon in the cooler water. It will move in the direction of Portugal early next week. Earl (winds now at 85 mph) could become a major hurricane tonight or tomorrow as it passes just east of Bermuda, then it becomes post-tropical in the Atlantic as it moves east/northeast.

There are tropical waves in the eastern Atlantic and near the coast of Africa, but if these develop they will turn northward. No tropical systems will threaten the U.S. Gulf Coast or Atlantic Coast for at least the next 7-10 days. 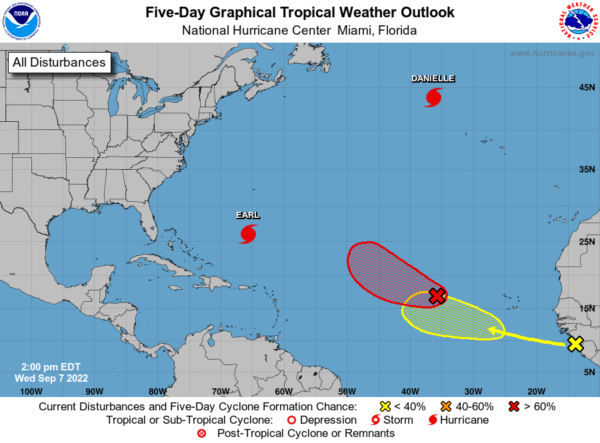 FOOTBALL WEATHER: For the high school games across Alabama Friday night, periods of rain are likely with temperatures in the 70s.

ON THIS DATE IN 1970: A lightning bolt struck a group of football players at Gibbs High School in St. Petersburg, FL. The lightning killed two people and injuring 22 others. All 38 players and four coaches were knocked off their feet.