RADAR CHECK: A band of showers and thunderstorms, some with heavy rain and gusty winds, continues to move down through Central Alabama this afternoon. This is in advance of a surface front dropping into the Tennessee Valley, which marks the leading edge of much drier air. Showers and storms will shift into South Alabama this evening, and dry air moves southward into the state tonight. Temperatures are in the 70s where rain is falling, but we are seeing low to mid 90s over the southern counties of Alabama this afternoon. 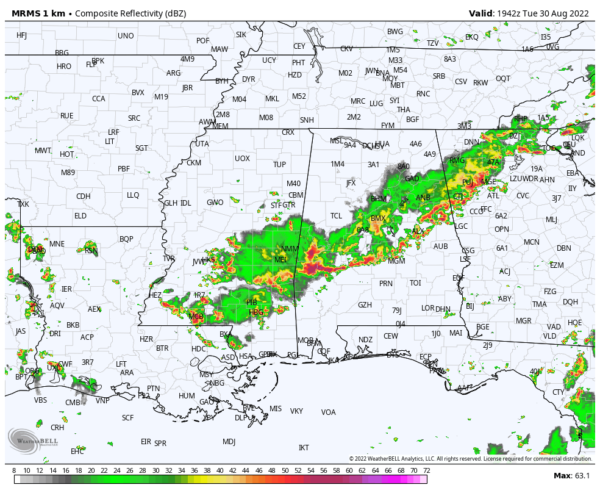 TOMORROW/THURSDAY: Look for mostly sunny days and fair pleasant nights… scattered showers will be confined to the Gulf Coast, and even there they should be few and far between. Highs will be close to 90, but humidity values will be lower. Temperatures early Thursday morning will drop into the mid 60s, and cooler pockets will be closer to 60 for a nice touch of fall.

FRIDAY AND THE LABOR DAY WEEKEND: Moisture returns Friday, and a few scattered showers or storms could show up by afternoon. Then, for the holiday weekend, look for warm, humid days with a mix of sun and clouds Saturday through Monday. We will have scattered to possibly numerous showers and storms around each day, but that doesn’t mean a “wash-out” at all. Most (but not all) of the showers will come from noon to midnight, and the chance of any one spot seeing rain each day is 50-60 percent. Highs will be mostly in the mid 80s.

NEXT WEEK: We are looking at routine weather Tuesday through Thursday with partly sunny days and “scattered, mostly afternoon and evening showers and thunderstorms”. There is some hint dry air could move into the state Friday… highs will be in the mid to upper 80s. See the daily Weather Briefing video for maps, graphics, and more details. 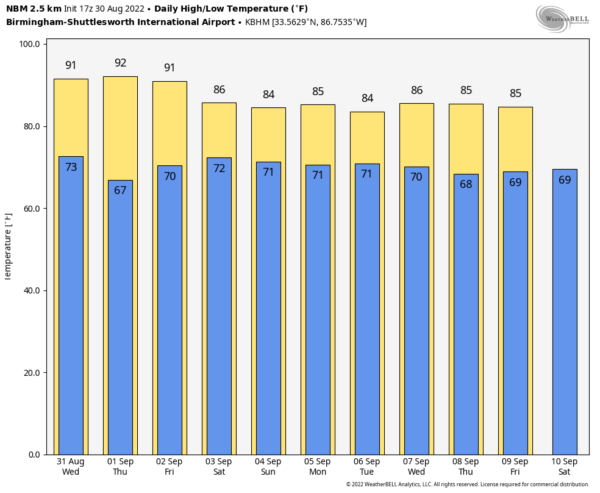 TROPICS: NHC continues to monitor two tropical waves this afternoon. One is located several hundred miles east of the Lesser Antilles… the other one is just off the west coast of Africa. These have a medium to high chance of becoming a tropical depression or storm over the next five days, but upper air winds will turn them north, and then northeast into the open Atlantic well east of the U.S. No tropical systems are expected to threaten the U.S. and the Gulf of Mexico for at least the next 7-10 days as the amazingly quiet hurricane season rolls along. 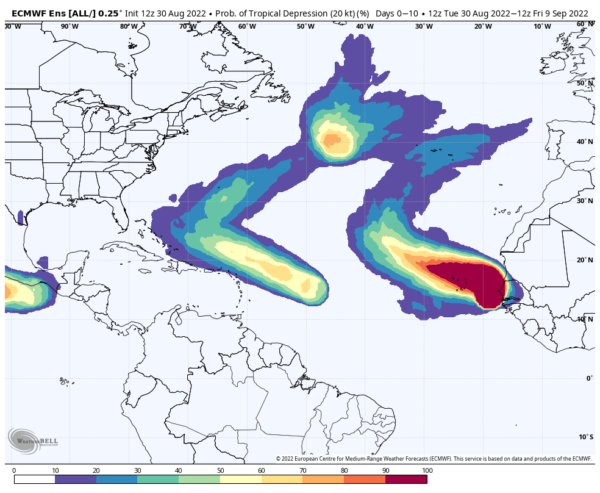 Auburn begins their season Saturday evening; they host Mercer at Jordan-Hare Stadium (6:00p CT kickoff). A shower or storm can’t be ruled out during the first half, otherwise the sky will be mostly cloudy. About 85 at kickoff, upper 70s by the final whistle.

Alabama also plays Saturday evening; they will host Utah State at Bryant Denny Stadium (6:30p CT kickoff)… pretty much the same situation as Auburn. A passing shower or storm is possible during the first half, otherwise it will be a warm, humid night with temperatures falling from the mid 80s at kickoff into the upper 70s by the end of the game.

ON THIS DATE IN 2002: Typhoon Rusa dumps torrential rains across South Korea, causing widespread flooding from the 30th through September 1st. Typhoon Rusa was the most powerful typhoon to hit South Korea since 1959. Nearly 90,000 people were evacuated. The province of Gangwon was hit the hardest, where an estimated 36 inches of rain fell in less than 48 hours. The torrential rains flooded nearly 36,000 homes.