RADAR CHECK: Rain and thunderstorms are fairly widespread over the northern half of Alabama this afternoon… heavier storms are producing small hail and strong gusty winds. Temperatures have cooled into the 70s where rain is falling… but South Alabama is mostly sunny with temperatures hovering around 90 degrees. Showers and storms will taper off tonight as a front pushes into the state from the north, and the air becomes more stable. 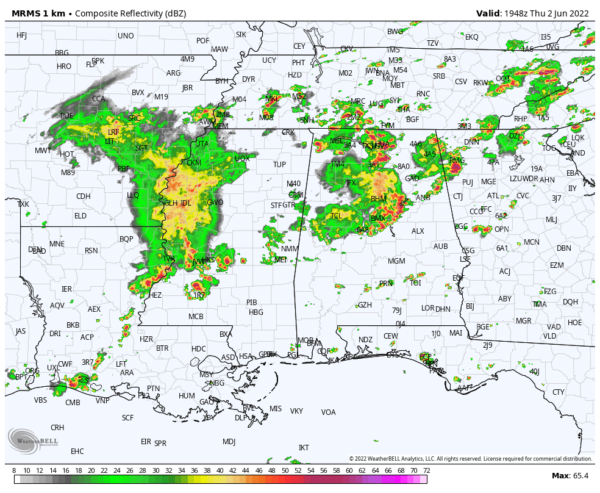 Drier air will cover the northern half of the state tomorrow… the sky becomes partly sunny with lower humidity levels and a high in the low 80s. A few scattered storms remain possible over South Alabama, where SPC has a “marginal risk” (level 1/5) of severe thunderstorms defined for the potential for small hail and gusty winds. 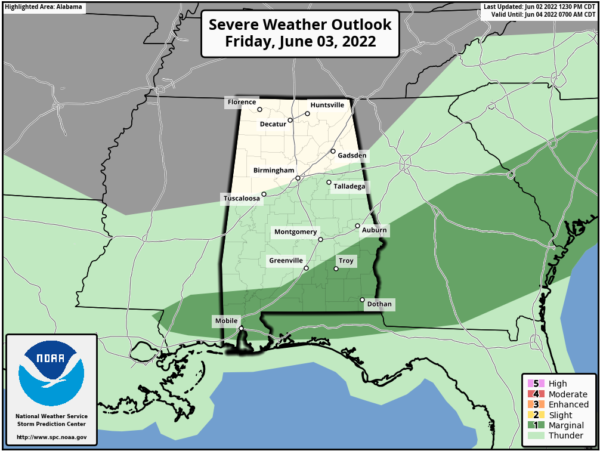 THE ALABAMA WEEKEND: Saturday will be a sunny day… cooler spots will start the day in the 50s, followed by a high in the mid 80s. For Sunday, the sky will be partly sunny with only a small risk of a shower as there will be an increase in moisture. The high Sunday will be in the upper 80s.

NEXT WEEK: The week looks pretty quiet at this point; partly sunny days, fair nights, and only a few isolated afternoon showers around from time to time. The high most days will be at or just over 90 degrees. See the Weather Xtreme video for maps, graphics, and more details. 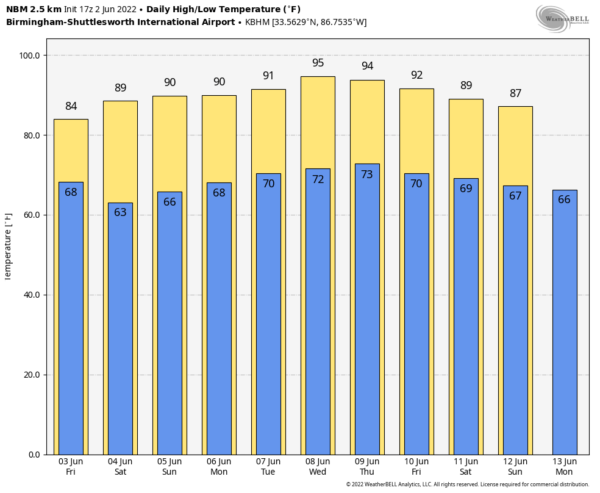 TROPICS: A broad area of low pressure (the “ghost” of former eastern Pacific Hurricane Agatha) located over the northeastern portion of the Yucatan Peninsula continues to produce a large area of disorganized showers and thunderstorms over the northwestern Caribbean Sea and Yucatan Peninsula. Despite strong upper-level winds, this system is likely to become a tropical depression or tropical storm while it moves slowly northeastward over the northwestern Caribbean Sea and southeastern Gulf of Mexico during the next day or two. Interests in western Cuba, the Florida Keys, the Florida Peninsula, and the northwestern Bahamas should monitor the progress of this system, and tropical storm watches or warnings will likely be required for some of these areas later today.

Regardless of development, areas of heavy rainfall are likely across portions of the Yucatan Peninsula and western Cuba during the next day or so, spreading across southern and central Florida and the Florida Keys Friday and Friday night, and the northwestern Bahamas on Saturday. These heavy rains could cause scattered to numerous flash floods across South Florida and the Florida Keys. Amounts of 6-10 inches are possible over the southern tip of Florida from now through Saturday night. 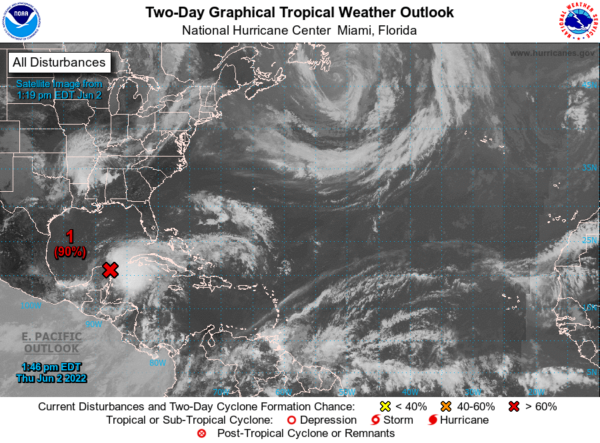 All of this will stay well to the south of the Central Gulf Coast (Gulf Shores to Panama City Beach). The rest of the Atlantic basin is very quiet.

ON THIS DATE IN 1998: Frostburg, Maryland on June 2, 1998, at 9:45 PM – This was part of a killer outbreak of tornadoes that moved southeast from Pennsylvania. The storm entered Garrett County, Maryland striking the town of Finzel. It then moved up and over Big Savage Mountain in Allegany County and ripped through the northern portion of Frostburg. It reached its peak strength as it crossed the ridge. Winds were estimated between 210 and 250 mph (F4 on the Fujita Tornado Damage Scale). This was the first tornado to “officially” be rated an “F4” in the State of Maryland.