RADAR CHECK: Showers and thunderstorms continue to develop across much of Alabama this afternoon in the very humid airmass over the state. Like recent days, stronger storms are producing heavy rain, gusty winds, and lots of lightning. Away from the storms we have a mix of sun and clouds with temperatures in the 86-90 degree range. Showers and storms will fade late tonight. 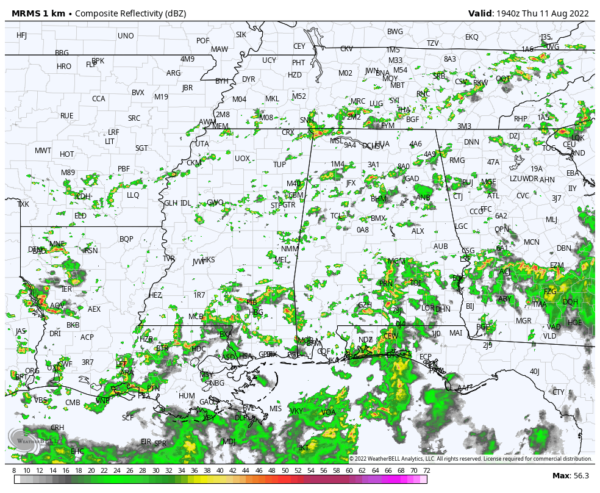 Drier air begins to move into North Alabama late tonight, and tomorrow the best chance of showers and thunderstorms will be over the southern half of the state. The high tomorrow will remain between 87 and 90 degrees for most communities.

THE ALABAMA WEEKEND: Most of the state will be dry with mostly sunny days, fair nights, and slightly lower humidity levels. Showers will be mostly confined to the Gulf Coast, and highs will be pretty close to 90 degrees. Some cooler spots over North Alabama could dip into the low 60s early Saturday morning in the drier air, a little tough of fall.

NEXT WEEK: For now most of Alabama looks dry Monday, but scattered showers and storms return Tuesday and Wednesday. Global models hint at another push of drier air for Thursday and Friday… See the daily Weather Briefing video for maps, graphics, and more details. 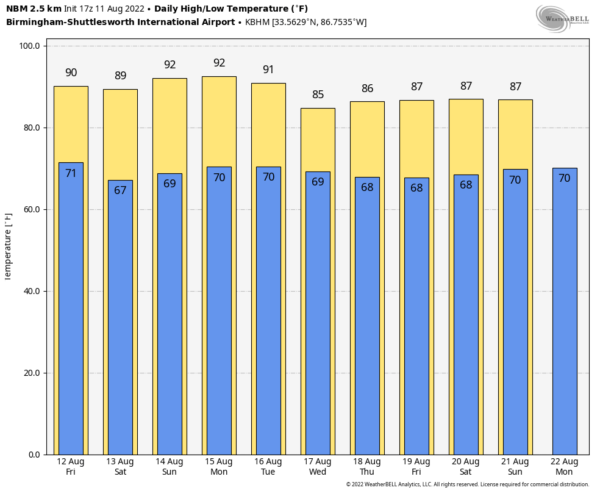 TROPICS: Invest 97L has fizzled out, and the Atlantic basin is now very quiet. Tropical storm formation is not expected for at least the next five days.

ON THIS DATE IN 1940: A Category 2 hurricane struck the Georgia and South Carolina coast. A 13-foot storm tide was measured along the South Carolina coast, while over 15 inches of rain fell across northern North Carolina. Significant flooding and landslides struck Georgia, North Carolina, Tennessee, and Virginia during the system’s slow trek as a weakening tropical storm, and then as an extratropical cyclone, through the Southeast. The landslides which struck North Carolina were considered a once in a century event.

ON THIS DATE IN 1999: An F2 tornado touched down in the metropolitan area of Salt Lake City. The tornado lasted ten minutes and killed one person, injured more than 80 people, and caused more than $170 million in damages. It was the most destructive tornado in Utah’s history and awakened the entire state’s population to the fact that the Beehive State does experience tornadoes.