RADAR CHECK: We have a cluster of showers and storms over parts of Northwest Alabama early this morning, along with some scattered rain near the Gulf Coast. Otherwise, it is a dry, muggy summer morning. Look for scattered to numerous showers and thunderstorms to form in this ocean of humidity later today, mostly between noon and midnight. Like recent days, where storms form they will produce heavy rain, gusty winds, and lots of lightning. The high today will be in the 85-89 degree range for most communities.

TOMORROW THROUGH THE WEEKEND: Dry air begins to move into the state tomorrow; the best chance of showers and thunderstorms will shift down into the southern counties. And, most of the weekend will be dry with mostly sunny days, fair nights, and slightly lower humidity values. Scattered showers Saturday and Sunday should be confined to the Gulf Coast, and highs will be in the 87-90 degree range. Lows will drop into the 60s.

NEXT WEEK: Monday still looks dry, but moisture levels rise Tuesday and we will bring back the chance of scattered showers and storms. There is some evidence another shot of drier air could arrive later in the week… See the daily Weather Briefing video for maps, graphics, and more details. 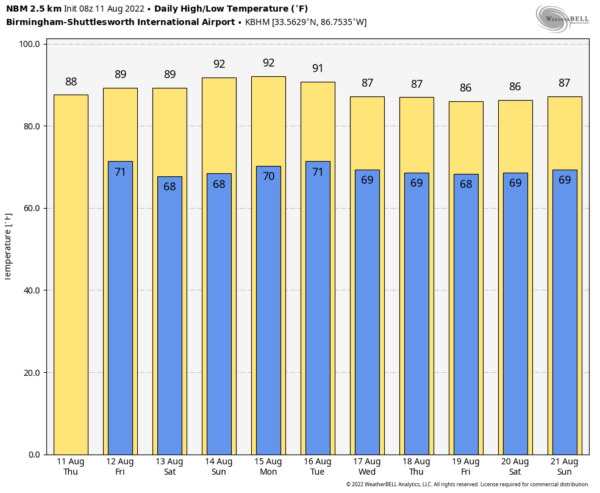 TROPICS: The tropical wave located about 800 miles west-southwest of the Cabo Verde Islands (Invest 97L) continues to produce some disorganized shower
activity. Upper-level winds are expected to become increasingly unfavorable for development during the next couple of days while the system moves generally west-northwestward at 15 to 20 mph across the tropical Atlantic.

NHC has dropped the chance of development to 10 percent, and the wave will likely dissipate far from land. The rest of the Atlantic basin remains remarkably quiet for mid-August. 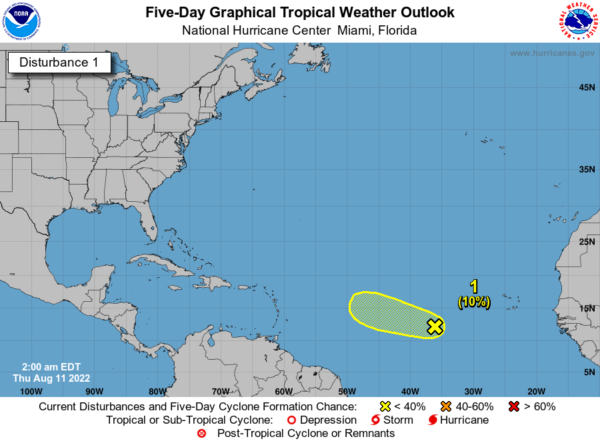 ON THIS DATE IN 1940: A Category 2 hurricane struck the Georgia and South Carolina coast. A 13-foot storm tide was measured along the South Carolina coast, while over 15 inches of rain fell across northern North Carolina. Significant flooding and landslides struck Georgia, North Carolina, Tennessee, and Virginia during the system’s slow trek as a weakening tropical storm, and then as an extratropical cyclone, through the Southeast. The landslides which struck North Carolina were considered a once in a century event.

ON THIS DATE IN 1999: An F2 tornado touched down in the metropolitan area of Salt Lake City. The tornado lasted ten minutes and killed one person, injured more than 80 people, and caused more than $170 million in damages. It was the most destructive tornado in Utah’s history and awakened the entire state’s population to the fact that the Beehive State does experience tornadoes.