An interesting event occurred at Denver International Airport this morning. I thought you would like to read about it.

Late this morning, an area of thunderstorms just east of Denver International Airport caused a “gust front” to move out ahead of the rain to cause wind gusts to 63 mph. 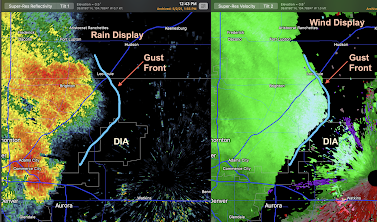 The rainfall display (left) shows at 11:43am MDT, the gust front (blue line) is four miles ahead of (east) of the thunderstorm’s rain. The front was moving from northwest to southeast across the airport (DIA). The display on the right, which depicts winds, shows winds ≥ 50 mph (very light blue) directly over the airport.

At the same time, United Airlines’ Flight 1515 from Houston was on its final approach on the east side of the airport. The plane had to abandon the landing attempt and it executed what is known as a “missed approach.” Below is what occurred… 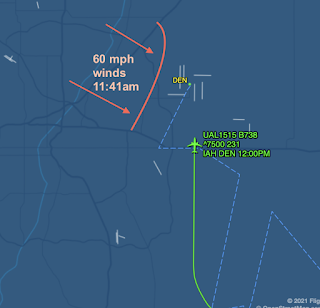 The gray lines near “DEN” are the runways. The red line represents the leading edge of the strong winds. 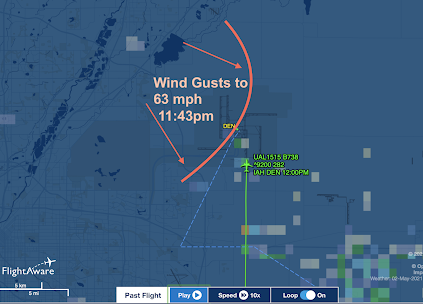 I suspect (but don’t have enough data to firmly establish) that wind shear alarm triggered when the gust front reached the airport’s center field wind measuring equipment. I believe that this was the point the captain called for a “missed approach.” In that circumstance, the aircraft levels off (stops its descent to the runway) and flies the same direction as the runway underneath the plane until the air traffic controller clears the plane to circle around and attempt to land again.

That this exactly what happened. The plane circled around to the east then south. By the time the plane made its second approach the hazard had passed. 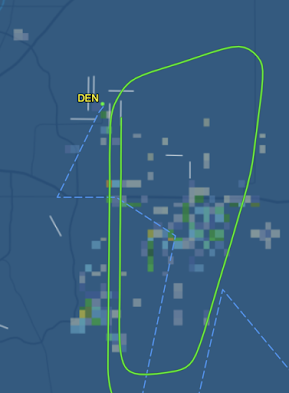 This is the way the system is supposed to work. It is likely the wind shear alerting system played a role in this happy outcome.

However, it does seem a bit odd the plane got this close to landing during a strong wind shear event. As long-time readers know, I am concerned that pilot weather training has not kept up with meteorological knowledge. Could it be the crew was relying on its radar (which shows the position of the rain, only) without considering the possibility of a gust front over the airport?

So, to the many pilots that read this blog, keep this in mind when you are preparing to take off or land (this type of wind shear only affects planes at low altitude).