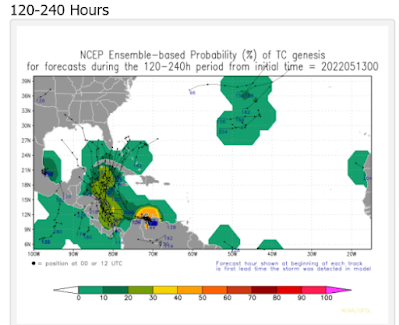 This is what everyone is talking about.

The internet goes crazy when the models do….

That said, they have been consistent! 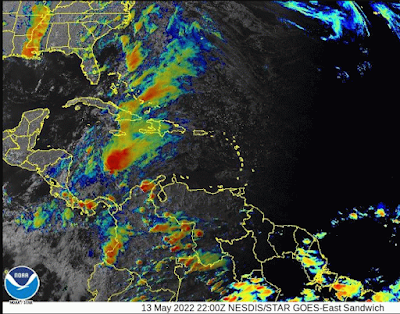 This is what’s in the Caribbean today.

Moisture at the bottom of a trough like feather.

Every year way before the start of the hurricane season some model produces a hurricane that lands in the Gulf of Mexico. Years ago it was the MRF model and before that there was another model. It’s that time of year. The time of year you need to refresh your hurricane supplies and update any plans for evacuation should you live in an evacuation zone.

I can’t tell you something will form and I will not tell you nothing will form. It’s been extremely hot in Texas and parts of the South. There is talk that a high pressure will build to the North often that can be a contributing factor to tropical development. You also need the water to be hot or at least hot enough. There are some areas that are in the 80 range, but it’s not warm enough currently to jump on board the Model Train.

That said, early season storms do form in May and that list goes all the way back to the 1800s as shown below. The MJO gets a vote, shear gets a vote, water temperature gets a vote and while we are in Early Voting Mode the election is not til next week, later in the week. So til then it’s all about the models. 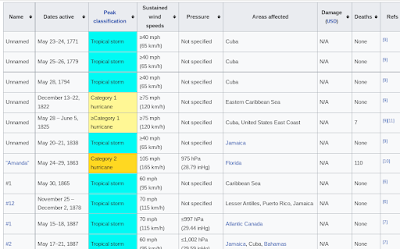 This shows how busy the tropics can be in May.

The link to the article is below.

It’s worth reading through……..

Below you can see the tracks for Hurricane Alma in 1966 and 1970. Yes, Alma was a bit OCD on track and both were early May/June storms. 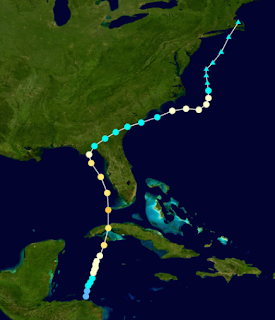 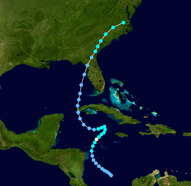 You get the idea.

Things form down below.

They look for a weakness in the atmosphere….

This is not a track for our storm if it forms. Models take it to Florida and to Texas and every place in between and it’s possible in a few days the models will go poof!

Stay tuned and have an incredible weekend!

Ps…eventually they did get rid of the name Alma…. that’s one name that’s gone with the wind!