Cooler weather is ahead for Alabama behind a powerful front that is pushing through the state this morning. The 70s we have experienced much of this month will be a thing of the past until late in the week ahead. It won’t be especially cold, just cooler than we have seen lately. 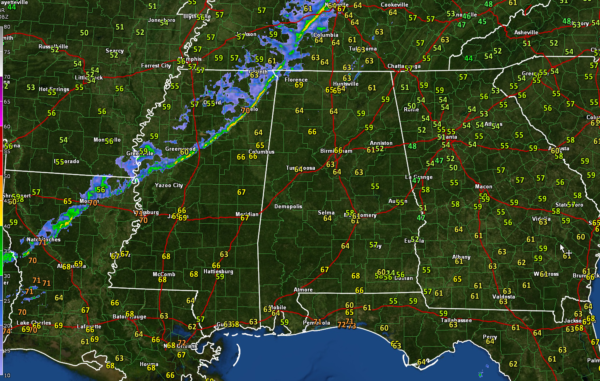 ON THE WEATHER MAPS: We have a cold front pushing southeastward across Northwest Alabama this morning. Readings drop about ten degrees immediately behind the strong front, and winds are a little gusty, occasionally reaching 20-25 mph just ahead and behind it. There are a few showers ahead of, along, and behind the front that will continue through the morning hours across much of Northwest and North Central Alabama. The showers should be mainly southeast of I-59 by noon, with only a few lingering showers after that. The last showers should exit the I-85 Corridor by 2 p.m. Temperatures will fall quickly into the 50s after 4 p.m. across the entire area.

TONIGHT: It will be drier and cooler tonight, with lows in the mid 30 North, to upper 30s near I-20, to lower and middle 40s across South Central Alabama. There may be some patchy frost over northern sections, but Central Alabama should mostly escape this possibility.

TEMPERATURE FORECAST: Dry through Friday with high pressure in charge of our weather. Temperatures will be in the 60s Monday, Tuesday, and Wednesday, but return to the 70s by Thursday and Friday. Lows will be in the 30s to lower 40s through Thursday morning, with 40s to lower 50s Friday morning.

IOTA: Tropical Storm Iota began strengthening yesterday over the southwestern Caribbean and it may still become a formidable hurricane before it reaches Central America late Monday into early Tuesday. It will bring another 10-20 inches of rain, storm surge, and destructive winds to the areas surrounding the border between Honduras and Nicaragua. Devastating flooding and mudslides will be the result. The area is still recovering from Hurricane Eta. The one piece of good news is that Iota poses no threat to the United States, the Bahamas, Cuba, the Cayman Islands, Hispaniola, or Jamaica.

BEACHCAST: The weather will match the beauty of the Alabama/Northwest Florida beaches this week. With the exception of a passing shower tonight in association with a fast-moving, mostly dry cold front, the next ten days will be dry with plentiful sunshine. Highs today will be near 80, falling back into the 70s for the rest for the week behind tonight’s front. Lows will be in the 40s through Monday night, but warming through the 50s for the remainder of the week. The rip current risk will be low, with surf heights less than 2 feet. Water temperatures are in the lower 70s.

NATIONALLY: Wind is the story nationally as a strengthening low-pressure system moves into the Great Lakes today, pushing a strong cold front southeastward. Wind advisories and high wind warnings are plentiful ahead of the system.

SPACEX LAUNCH: Saturday’s SpaceX launch was delayed to today, due to the weather at the rocket booster’s landing location. SpaceX is now targeting 6:27 p.m. CST tonight for the launch of Crew-1 via a Falcon 9 rocket from NASA’s Kennedy Space Center in Florida. Crew-1 is the first operational, contracted mission to launch as part of NASA’s Commercial Crew Program. If all goes according to plan, the Crew Dragon – which the Crew-1 astronauts nicknamed Resilience – will dock with the International Space Station on Monday. You can watch the Launch on NASA-TV.

DANCING WITH THE STATS: Record highs were set across Texas on Saturday, including 89F at Austin – Bergstrom, 86F at Houston Hobby, 83F at Galveston, and 91F at Brownsville.

ADVERTISE WITH US: Deliver your message to a highly engaged audience by advertising on the AlabamaWX.com website. The site enjoyed 20 MILLION pageviews in the past 12 months. Don’t miss out! We can customize a creative, flexible and affordable package that will suit your organization’s needs. Contact me, Bill Murray, at (205) 687-0782 and let’s talk.

WEATHERBRAINS: This week, the panel will entertain a group of meteorologists from North Carolina, including Friend of the Podcast Brad Panovich, one of the great TV mets around the country. Check out the show at www.WeatherBrains.com. You can also subscribe on iTunes. You can watch the show live at live.bigbrainsmedia.com or on James’ YouTube Channel You will be able to see the show on the James Spann 24×7 weather channel on cable or directly over the air on the dot 2 feed.

ON THIS DATE IN 2005: The F4 tornado at Madisonville, Kentucky was the latest violent tornado (F4 or F5) in 55 years. It also was the strongest tornado of the year. It destroyed 151 homes and businesses and injured 27 people. Follow my weather history tweets on Twitter. I am @wxhistorian at Twitter.com.