BREEZY/COOLER AFTERNOON: A surface front is moving through Alabama this afternoon, setting up a big thermal contrast. Huntsville reports 66 degrees at mid-afternoon, while at the same time Ozark is up to 84. The sky is mostly sunny, although clouds have moved back into Northwest Alabama ahead of an upper trough helping to push the cooler air into the state. Clouds will cover the northern counties of the state at times tonight; the low will be in the mid 40s.

TOMORROW THROUGH THE WEEKEND: Look for some fabulous fall weather on these three days. Mostly sunny days, fair nights… the high tomorrow will be in the 63-66 degree range, and close to 70 Saturday and Sunday. Lows in the 40s early tomorrow and Saturday morning, 50s Sunday morning for most places.

NEXT WEEK: Colder air dips into the Deep South early in the week. Temperatures will drop into the 30s Monday and Tuesday morning with the potential for a freeze for colder spots; frost is likely over the northern half of the state both mornings. The high Monday will be in the upper 50s, followed by mid 60s Tuesday. Then, we rise into the low 70s over the latter half of the week. The weather stays dry with mostly sunny days and clear nights. See the Weather Xtreme video for maps, graphics, and more details.

FOOTBALL WEATHER: For the high school games tomorrow night, the sky will be clear with temperatures falling from the mid 50s at kickoff into the upper 40s by the second half.

UAB is on the road; they take on Louisiana Tech in Ruston Saturday (2:30p CT kickoff)… the sky will be sunny with temperatures in the mid 60s at kickoff, falling to near 60 by the final whistle.

TROPICS: A large area of disturbed weather in the vicinity of the Lesser Antilles is associated with a tropical wave. Upper-level winds are expected to become more conducive for development of this disturbance during the next couple of days, and a tropical depression could form over the weekend or early next week while the system moves westward across the central and western Caribbean Sea. Too early to know if this will impact the Gulf of Mexico or the U.S. The Atlantic hurricane season runs through the end of November. 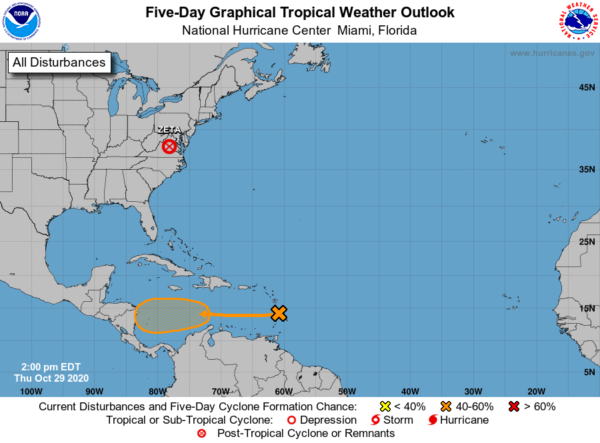 ON THIS DATE IN 1693: From the Royal Society of London: “There happened a most violent storm in Virginia which stopped the course of ancient channels and made some where there never were any.” Known as the Accomack Storm, this event likely caused changes to the Delmarva shoreline, and coastal inlets.