WARM AFTERNOONS, COOL NIGHTS: Dry air heats and cools very effectively; many spots across Alabama are in the 40s this morning, but temperatures will rise into the low to mid 80s this afternoon with a sunny sky. That 40 degree rise from morning low to afternoon high can only happen when the air is very dry like this. No change tomorrow, but the weekend will be noticeably cooler as afternoon temperatures won’t get past the low to mid 70s both days. Sunday morning will be chilly with a low in the 37-44 degree range. Colder valleys across North Alabama night even see a touch of light frost for the first time this season.

NEXT WEEK: Not much change; we do note globals hint at a chance of some light rain now along an cold front that will pass through the state Thursday (October 13). Otherwise, the week will be dry with temperatures reaching the low 80s by mid-week before the surge of cooler air following the front on Thursday. See the daily Weather Briefing video for maps, graphics, and more details. 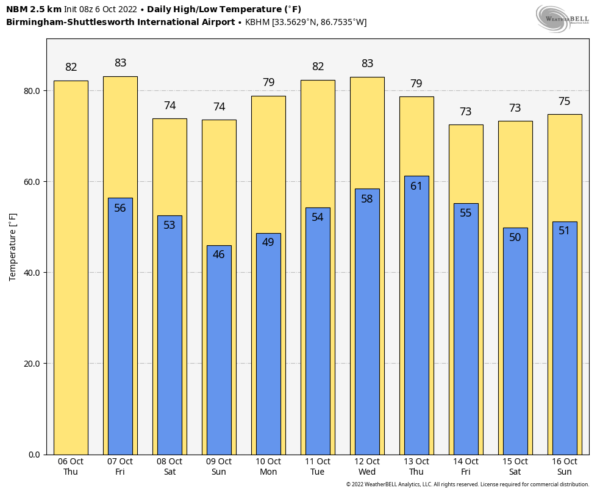 Some notes on the dry conditions (based on data at Birmingham)…

FOOTBALL WEATHER: Another delightful evening for high school football games across the state tomorrow night; the sky will be clear with temperatures falling through the 60s.

Auburn travels to Athens Saturday to take on the Georgia bulldogs (2:30p CT kickoff)… the sky will be sunny; about 76 degrees at kickoff, falling to near 70 by the final whistle. UAB has a home game in downtown Birmingham Saturday at Protective Stadium against Middle Tennessee (also a 2:30p CT kickoff)… it will be sunny afternoon with temperatures falling from around 73 degrees at kickoff into the upper 60s by the final whistle.

Then, Saturday night Alabama hosts Texas A&M (7p CT kickoff) at Bryant-Denny Stadium in Tuscaloosa; the sky will be clear with temperatures falling from 67 degrees at kickoff into the 50s by the fourth quarter. A perfect night for football.

TROPICS: Tropical Depression 12 in the eastern Atlantic is expected to dissipate today far from land.

An area of low pressure (Invest 91L) located over the far southeastern Caribbean Sea is producing a large area of showers and thunderstorms over the southern Windward Islands, northern South America, and adjacent waters. Satellite-derived wind data indicate that this system does not yet have a well-defined center of circulation. While land interaction with the northern coast of South America may hinder significant development during the next day or so, environmental conditions are expected to be mostly conducive for development as the system moves generally westward, and a tropical depression is likely to form in the next couple of days by the time the system enters the south-central Caribbean Sea.

This system is headed for Central America; it remains to be seen if the remnants will move into the Pacific, or curve northward toward the Bay of Campeche (the far Southwest Gulf of Mexico). The system could also completely dissipate over Central America. Still just something to watch for now. 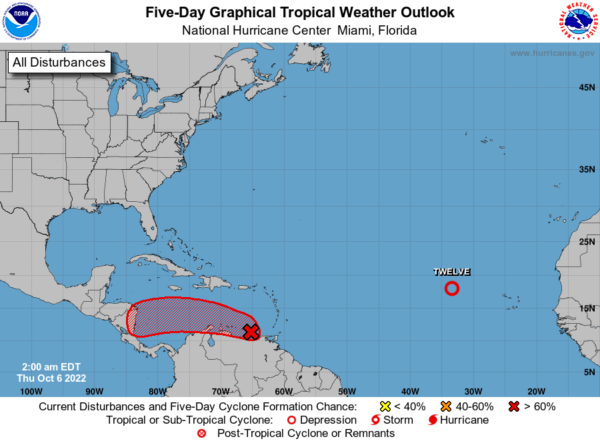 ON THIS DATE IN 1981: The Netherlands’ fourth-worst aircraft accident (at the time) occurred on this day. At 5:09 PM, the crew noted heavy rainfall in thunderstorms on the weather avoidance radar and received clearance to avoid this area. At 5:12 pm, the aircraft entered a tornado, which caused the right-wing to separate from the plane. All 17 occupants of the plane perished in the accident.

ON THIS DATE IN 2016: The center of Category 4 Hurricane Matthew passed within 100 miles of Miami.