HOT SEPTEMBER DAY: Temperatures are in the mid 90s across much of Alabama this afternoon, about ten degrees above average, and not too far from record values for the 21st of September. No rain on radar, and the sky is mostly sunny. We reach the 91-94 degree range tomorrow with a partly to mostly sunny sky, but a cold front will come through in dry fashion tomorrow evening, and that will bring heat relief by Friday and the weekend.

Friday will be a mostly sunny day with a high near or just over 80 degrees, and we drop into the cool 50s in many places by early Saturday morning as the “fall feel” returns.

THE ALABAMA WEEKEND: After starting the day in the cool 50s, the high Saturday will be in the mid 80s with a sunny sky. Then, for Sunday, we expect a mix of sun and clouds, and we will mention the chance of a few showers Sunday afternoon and evening over the northern half of Alabama ahead of a cold front. Moisture will be very limited, and rain amounts will be light and spotty. The high Sunday will be in the low 80s.

NEXT WEEK: Most of the week looks dry at this point with very pleasant temperatures; highs around 80, with lows in the 50s. See the daily Weather Briefing video for maps, graphics, and more details. 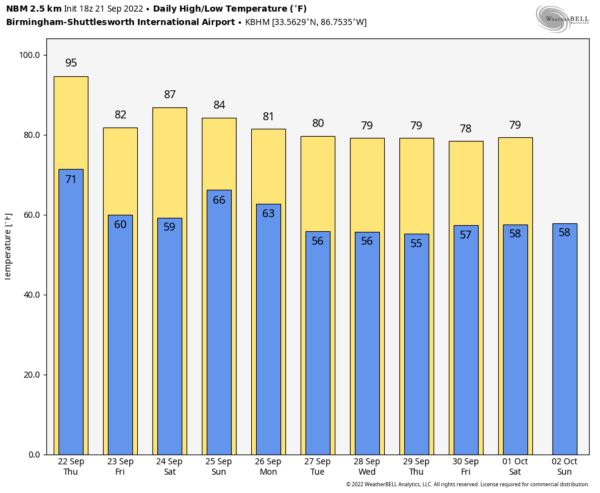 TROPICS: Fiona remains a major, category four hurricane with winds of 130 mph. It is about 650 miles southeast of Bermuda, and it will pass a little west of Bermuda early Friday morning. Tropical storm conditions are possible on Bermuda by late tomorrow. 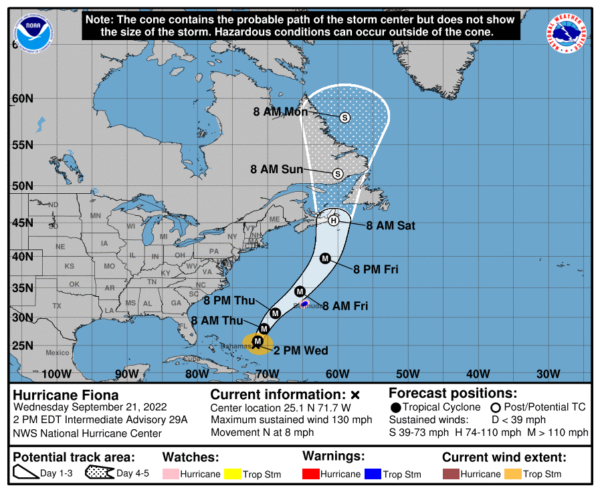 Newly formed Tropical Storm Gaston is in the middle of the Atlantic in the higher latitudes, and is no threat to land.

Most of our attention is focused on the tropical wave (Invest 98L) near the southern Windward Islands. The system continues to show signs of organization and it will likely become a tropical depression within the next two or three days. The disturbance is forecast to move west-northwestward across the southern Windward Islands by late today and then move toward the central Caribbean Sea later this week.

The system will likely be over Cuba, or near the Yucatan channel early next week. There is a reasonable chance it will be at hurricane strength as it approaches the southern Gulf of Mexico, but the important message here is that there is NO skill in forecasting the placement or intensity of a tropical cyclone more than 7 days in advance.

IF any part of the Gulf Coast is threatened, it will be toward the end of next week (8-10 days from now). Don’t be suckered into the rogue Facebook pages with scary deterministic model output; those maps mean nothing at this point. Once the system develops in the Caribbean and we begin to get data from hurricane hunter aircraft, we begin to have a clearer picture of what might happen. Don’t cancel any beach trip, just keep an eye on it. 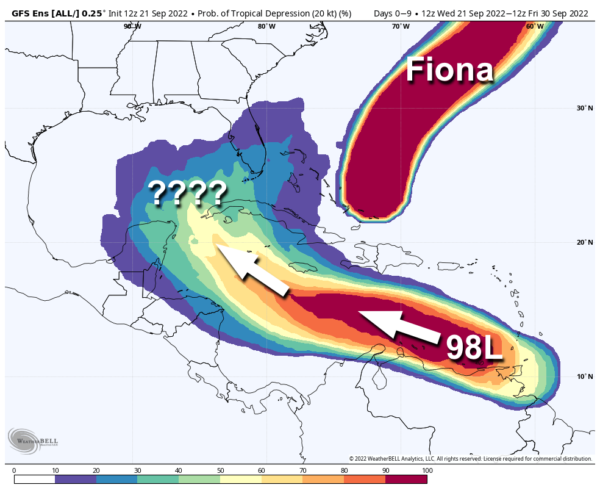 FOOTBALL WEATHER: Delightful weather for high school games Friday night across Alabama; the sky will be clear with temperatures falling into the 60s.

Alabama will host Vanderbilt at Bryant Denny Stadium Saturday evening (6:30p CT kickoff)… the sky will be clear with temperatures falling from 81 degrees at kickoff, into the low 70s by the final whistle.

ON THIS DATE IN 1938: One of the most destructive and powerful hurricanes in history to impact the Northeast U.S. struck Long Island and Southern New England. This Category 3 Hurricane was traveling at 47 mph when it made landfall near Bellport, New York. This storm caused at least 600 deaths and left approximately 63,000 homeless.

ON THIS DATE IN 1989: Hurricane Hugo made landfall on Isle of Palms, South Carolina as a Category 4 hurricane around midnight (technically landfall was just after midnight on September 22, 1989). Hugo produced tremendous wind and storm surge damage along the coast and even produced hurricane force wind gusts several hundred miles inland into western North Carolina. In fact, Hugo produced the highest storm tide heights ever recorded along the U.S. East Coast, around 20 feet in Bulls Bay, SC near Cape Romain. Total damage from this hurricane is estimated at $10 billion, including $5.2 billion in the United States. There were at least 39 fatalities during the post-storm recovery phase; more people died in South Carolina in the hurricane’s aftermath than during its passage.