We’ve experienced a beautiful run of spring weather over the past week or so with mild temperatures in the 70s and even a few low 80s, lows generally in the 50s, and fairly dry – with a couple of exceptions. The pattern has shifted though and cooler weather has settled in, perhaps for a while! Let’s dig into a few details.

Why the cooler air?

The cause for the upcoming string of below average temperatures can be seen if we look up a little ways – specifically about 18,000 feet up! At that level (what meteorologists refer to as 500 mb), a pair of low pressure centers dominate the eastern and western U.S. this evening. Over the coming week, the eastern U.S. low shifts east and strengthens (or “deepens”) while the western U.S. low expands and shifts east as well. By this weekend, the western low becomes a very strong low over the Mississippi Valley. On its heels as it continues east early next week, more low pressure spills south from Canada into the eastern U.S.

The loop below shows that progression, with blue shades representing below average pressure at that level of the atmosphere. Below average pressure aloft tends to result in below average temperatures at the surface and that is what much of the eastern and central U.S. will experience for at least the next week or so. In this case, it will also spell below average precipitation for our region over the coming week, but not necessarily perfectly dry as smaller upper level disturbances rotate around their parent low pressure centers.

Clouds depart late tonight and we start Thursday with sunny skies, but the next system (much like this morning’s) moves in late in the day tomorrow, bringing clouds and eventually a slight chance of rain Thursday night. Even with sun, look for highs in the mid 60s Thursday.

There won’t be much time between a weak system Thursday night and a stronger one Friday night, which brings perhaps our best chance of rain overnight. Some showers are possible by late afternoon Friday with the highest chances after dark. Fortunately, thunderstorms are not predicted with this round of rainfall. Friday’s high will be in the low 60s with lows in the upper 40s as you wake up to drying conditions Saturday morning.

The Memphis Tigers spring football game #FridayNightStripes may look a lot like a regular game in late October! 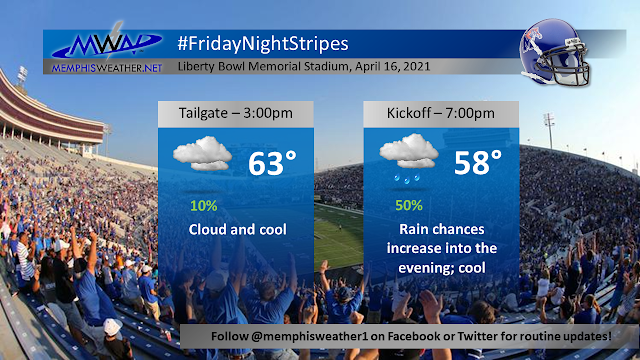 With the main upper low to our north Saturday and Sunday, we expect more clouds than sun this weekend, though primarily dry weather – 10-20% rain chances is about it. Highs remain in the mid 60s with lows in the mid to upper 40s into Monday morning.

Next week looks primarily dry through mid-week with varying degrees of cloud cover, highs in the mid to upper 60s and lows in the 40s. Average for mid-April is low 70s and low 50s.

As the spring semester comes to a close, a couple of transitions are occurring on #TeamMWN. Two excellent nowcaster/interns will be moving on. Justin Bowles will be graduating with a Master’s Degree in Meteorology from Mississippi State in a couple weeks after serving MWN very well this past school year. And Gracie Anello will be shifting her focus to broadcast this summer as she finishes her junior year and begins an internship at WKRN-TV in Nashville. She has likewise done an exemplary job on our social media feeds for the past 12 months. We wish them both well on their next adventures!

Taking their places are another Gracie (Gracie Dencausse), who will start her senior year at Mississippi State this fall in broadcast meteorology, and Christian Bridges, who has one more semester left at MSU (this fall) as he completes his undergrad degree in professional meteorology with a minor in Broadcast. Both have made their first posts on our social channels and are excited for what will likely be a few hundred more over the coming months!