CLEARING: As forecast, the sky has cleared over the northern half of Alabama this afternoon; showers linger south of a line from Lafayette to Montgomery to Monroeville. Those showers across East and South Alabama will end this evening, and the entire state will be dry tonight. Temperatures are only in the 60s over much of North Alabama, and by daybreak tomorrow we will drop into the 38-45 degree range. It will be one of the last really chilly nights before the long, hot summer gets here. 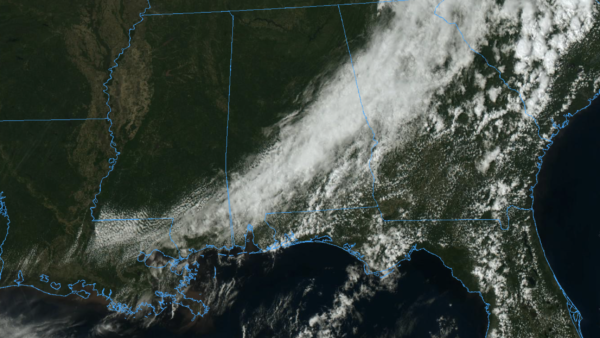 The weather will feature sunshine in full supply tomorrow with a high in the mid 70s. Then, look for a partly sunny sky Thursday and Friday with highs back in the low 80s.

THE ALABAMA WEEKEND: Moisture levels will rise, but an upper ridge will remain parked over the region. Expect a mix of sun and clouds Saturday and Sunday with highs in the low to mid 80s. A few spotty showers can’t be ruled out, especially Sunday over the northern third of the state. Chance of any one spot getting wet Saturday is 10-15 percent, and 20-30 percent Sunday.

NEXT WEEK: We will maintain some risk of scattered showers through the first half of the week; showers and a few storms will be a bit more widespread Wednesday before dry air returns Thursday and Friday. Highs will remain in the 80s… See the Weather Xtreme video for maps, graphics, and more details. 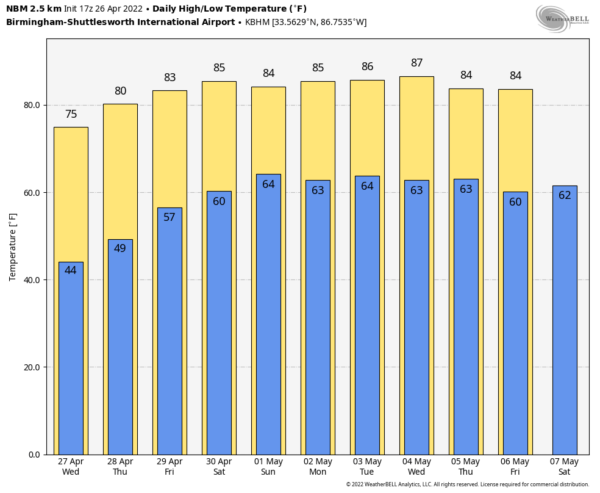 ON THIS DATE IN 1978: An unusually strong occluded front swept out of the Gulf of Alaska and produced the first April thunderstorm of record at Fairbanks. Pea-size hail fell northeast of Fairbanks from thunderstorms whose tops were less than 8000 feet.

ON THIS DATE IN 2011: The generational tornado outbreak of late April 2011 was underway. A high risk of severe weather was issued for April 26 for portions of Louisiana, Arkansas, Oklahoma, and Texas along and near the Interstate 30 corridor as conditions became even more favorable for extreme weather. Numerous tornadoes touched down across several states, including Texas, Louisiana, Arkansas. Most of those tornadoes were weak, but a few of them caused considerable damage. A long-tracked wedge tornado caused EF-2 damage in rural portions of Texas and Louisiana.An EF-3 tornado destroyed structures and caused severe damage at Fort Campbell, Kentucky, as well. A total of 55 tornadoes were confirmed the 26th, although no fatalities occurred.

The following day, April 27, 62 tornadoes would touch down across Alabama, killing 252 people.

7:00 AM | ***Winds can gust to 50 mph from later tomorrow into tomorrow night surrounding arrival and passage of a strong cold front*** — Arcfield Weather