CLOUDY, COOL, CALM: The sky is mostly cloudy over the northern half of Alabama this afternoon with temperatures only in the 54-62 degree range. A few sprinkles, or patches of light rain are possible through the evening hours, but most of the state will be dry. Mostly cloudy and cool weather continues through tomorrow night, although South Alabama should see a decent amount of sun during the day tomorrow. The high tomorrow will be in the mid to upper 50s again.

THE ALABAMA WEEKEND: The sky becomes partly to mostly sunny Saturday with a high in the low 60s. Saturday night will be clear and cold… temperatures will drop into the 30s early Sunday morning with a good chance of frost. Colder valleys will see a light freeze. Then, during the day Sunday, look for sunshine in full supply with a high in the upper 60s.

NEXT WEEK: Monday will be dry with a partly sunny sky along with a high in the low 70s. Showers and storms return Tuesday, and as the front becomes nearly stationary showers will linger into Wednesday. A more robust system brings rain and storms Thursday and Thursday night… that one could bring potential for strong to severe thunderstorms. Drier air returns Friday. 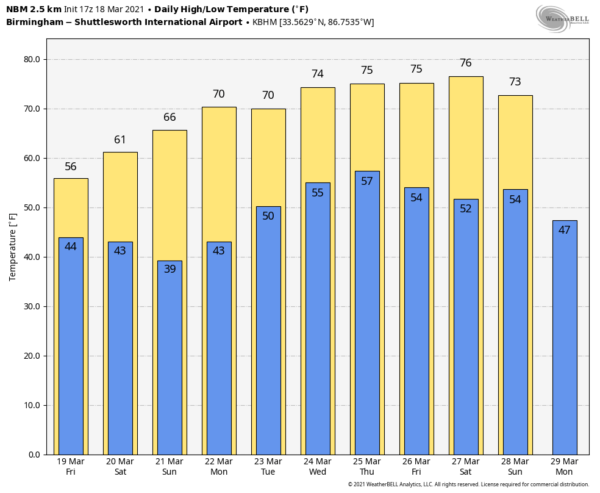 ON THIS DATE IN 1925: The great “Tri-State Tornado” occurred, the deadliest tornado in U.S. history. The storm claimed 695 lives (including 234 at Murphysboro, IL, and 148 at West Frankfort, IL), and caused seventeen million dollars property damage. It cut a swath of destruction 219 miles long and as much as a mile wide from east-central Missouri to southern Indiana between 1 PM and 4 PM. The tornado leveled a school in West Frankfort, Illinois, and picked up sixteen students setting them down unharmed 150 yards away. Seven other tornadoes claimed an additional 97 lives that day.

ON THIS DATE IN 2013: An EF-1 tornado touched down in Marshall County in Boaz and moved eastward into Etowah County, moving through Sardis City. The most extensive damage occurred as the tornado approached Rowen Road. A mobile home was lifted and overturned leaving one person seriously injured and two others with minor injuries. In this same area, two additional mobile homes were destroyed.