A major lowland snow event is increasingly possible starting on Thursday and Friday, but uncertainly is still substantial.  But before I get into that, let us start with the potential for light snow tonight, particularly for higher elevations north of Seattle.

The latest visible satellite image (below) show cool unstable air entering our region.  The air is being forced to rise as it hits the Cascades producing substantial snow on the upper slopes and passes.  A particularly heavy snow area is indicated by the blue arrow. 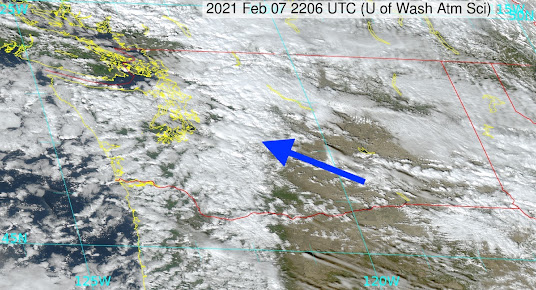 Snoqualmie Pass, located in that areas, has had heavy snow and chains are required in both directions. 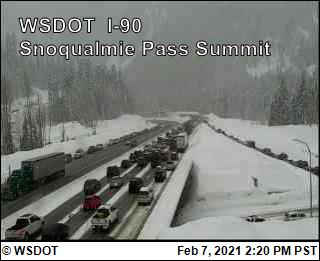 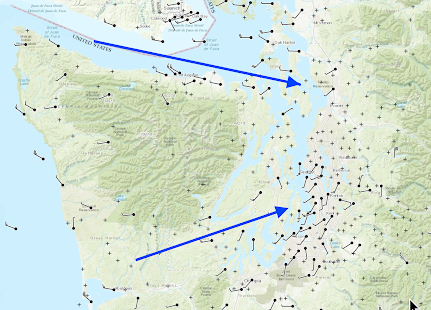 The air above us has been cooling over time and the snow level is about 1500 ft and will drop further.

This cooling will be aided by a surge of cooler air from the Fraser River Valley of British Columbia.

The UW model forecast snowfall total through 7 PM tonight (Sunday) showz the mountain snows and that heavy band I was talking about….which is the culprit behind the troubles at Snoqualmie Pass.

The total through 10 AM tomorrow shows some light snow in north King and Snohomish counties from the convergence zone— perhaps a few tenths of an inch to an inch– above 500 ft.  It will melt quickly on the roads.

And there is another snow area over the northeast side of the Olympics as some of the Fraser River northeasterly flow is forced upward by the terrain.  The forecast wind gusts at 7 AM tomorrow morning shows the cold Fraser River winds pushing across Bellingham, the San Juans and then into the Olympics. 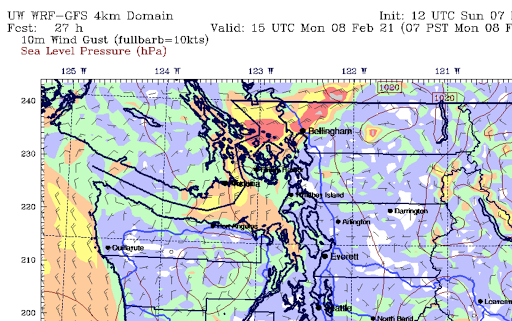 All of this is just a “warm up” for the real action.

Our region is going to be hit by the coldest air this winter and by Thursday we won’t get out of the 30s and perhaps even the 20s.   I mean cold, really cold. Windy.

And major forecast systems are now going for major lowland snow.  The latest European Center forecast has around 15 inches of total snowfall over central Puget Sound by Friday afternoon!  How much would pile up?  Perhaps half of that. 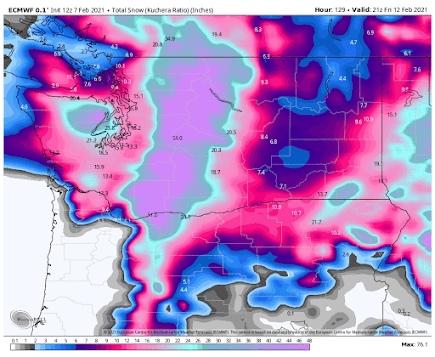 Looking at the ensembles of many forecasts, here is the snowfall  totals for all 51 members of the European Center ensemble for Seattle:  nearly all have significant snow. 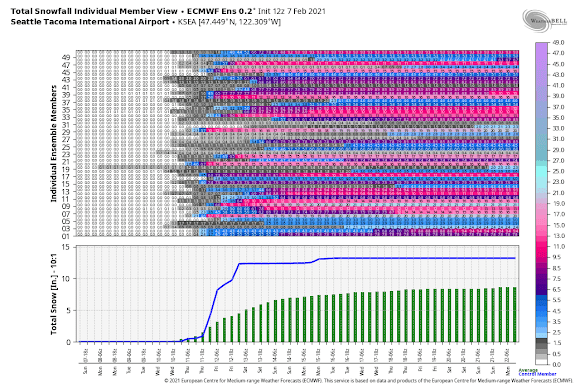 The U.S. GFS model is less aggressive with snow, but has several inches over the area.

We will have the cold, the big uncertainty will be the precipitation.   I will be watching this carefully.

I have learned about writing snow blogs…. I am heading to the food store right now!   If this forecast becomes more certain, the shelves will be stripped of eggs, milk, bread or toilet paper.