Our region will soon experience colder temperatures and substantial snowfall in the mountains.  The snow level will fall and virtually everyone will see some snowflakes.

But the truth is that we will NOT be experiencing the primo Arctic cold air associated with most major lowland snow events, with minimal snow falling around Puget Sound near sea level.

But there is a substantial lowland snow threat and for that one will have to look southward towards Portland and western Oregon. 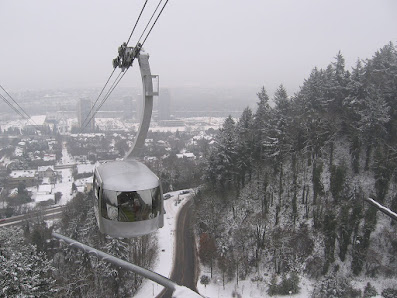 Portland May Get Much More That A Dusting

The transition starts on Thursday as a low pressure center moves south of us, pulling cooler air southward from British Columbia (see sea level map below for 1 PM Thursday, with blue colors being colder air).

The wind gust forecast for Thursday morning shows northeasterly winds pushing through the Fraser River Valley, across the San Juans, and out the Strait into the Pacific.  Cool, northerly winds will also push southward into the Pacific.

But there will be little moisture and no lowland snow:  the low center is too far south and west to do us much good.

But life is all about second chances, and lowland snow lovers will gaze hopefully at a frontal system approaching early Sunday morning (1 AM sea level pressures and low level temperatures shown below).  Relatively cold air will be in place (blue colors) and this is night when temperatures are cooler.

The front will have precipitation with it, but temperatures near sea level will be marginal for snow.

The UW WRF model’s accumulated snowfall (NOT SNOWDEPTH) through 7 PM Sunday, shows half a foot or more in the mountains with the snowfall rapidly decreasing near sea level (very little at the lowest elevations).   Snowflakes will be seen everywhere, but only  minimal amounts near sea level.  The European Center forecast is very similar.

But like a late-night commercial, I must interject:  wait, there’s more!

On Tuesday, a MUCH stronger and potent low center will be moving southward off our coast.  One with much more precipitation and forcing of upward motion (see sea level pressure map for1 PM Tuesday).

Notice the large east-west pressure difference down the Columbia Gorge, which could bring strong (cool) easterlies into Portland and environs, while lots of precipitation is falling into the region.

This pattern can produce substantial snow around the northern Willamette Valley and Portland.

Take a look at the 48-h snowfall ending 4PM next Tuesday.  Portland gets hit with nearly a foot of snow.  And lots in the Oregon Cascades.

If the forecasts are wrong and the low is farther north, then Seattle could get a big event.

Finally, let’s look at the excellent European Center ensemble snow forecasts for Seattle, based on running their model 51 times!.  A good way to judge uncertainly.  Each horizontal stripe is one forecast and the cumulative amounts are color coded.  The average of the forecasts are shown by the green bars.

Nothing to get excited about.  Most ensemble members are predicted some snowflakes at SeaTac airport (which is relatively high at 452 ft).  Total snowfall (not snow depth) of around an inch. There will be less at lower elevations.  Bummer. 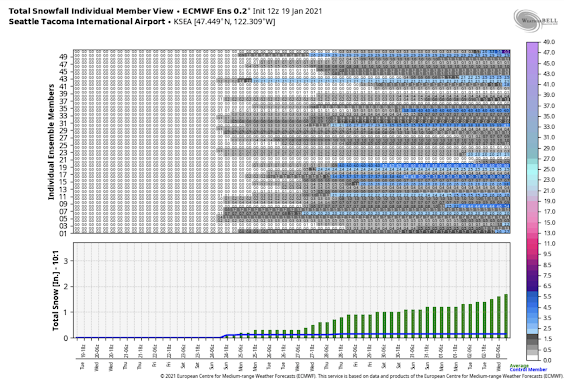 But what about Troutdate, at the western exit of the Columbia Gorge and just NE of Portland?  Wow…  a lot more! 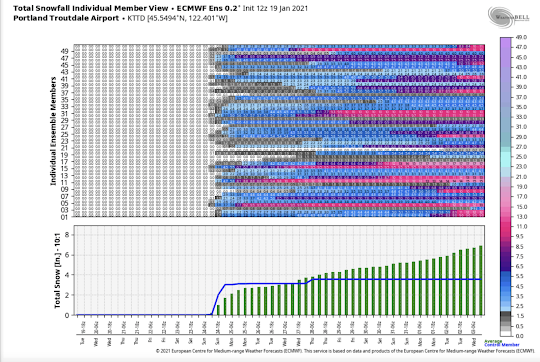 We are still a ways out and the forecast can change.  The mountains will get plenty–you can bank on that.  Skiers will be happy.  Water managers will smile.   But those wanting snow near sea level may remain looking longingly at the sky…..