COLD, WET START TO THE WEEKEND: Clouds are increasing again across Alabama this afternoon as a wave of low pressure forms on a stalled front over far South Alabama. Some light rain is falling over the southern half of the state, and temperatures are mostly in the 50s.

Tomorrow will be a cloudy, cold day with periods of rain statewide. Highs will be in the 40s over North Alabama, with 50s to the south. Many communities across the Tennessee Valley, however, could hold in the 30s all day with both dynamic and evaporative cooling in play. These cooling processes could lead to some snow over far North Alabama late tomorrow and tomorrow night… some light accumulation is possible on grassy areas, but surface temperatures are forecast to be in the mid 30s and roads should be wet with no ice issues generally expected. Best chance of seeing some snow tomorrow night will be over the northeast part of the state… counties like Madison, Marshall, Jackson, DeKalb, and Cherokee.

Sunday will be brighter and warmer. The sky becomes partly to mostly sunny with a high in the low 50s.

NEXT WEEK: Monday will be dry and pleasant with a high in the low 60s. Moisture levels increase a bit Tuesday and Wednesday, and a little scattered light rain can’t be ruled out. The weather will be mild with highs in the mid 60s. Then, on Thursday, rain is likely statewide as an Arctic cold front creeps into the state from the north.

ICE ISSUES FRIDAY??? The combination of an active southern branch of the jet stream and a shallow layer of very cold air could open the door for some winter weather issues a week from today (Friday February 12). Wintry precipitation could begin as early as Thursday night. It is important to note that there is absolutely no way of presenting a specific forecast for this event right now. The event could bring lots of rain, followed by cold dry air with no winter impact at all. Or, parts of Alabama could see a high impact winter weather situation. It is simply too early to call.

We continue to watch ensemble output from global models, and they continue to show signals for ice issues for parts of the Deep South, but we won’t have a “first forecast” until Monday. Even then there will be a good bit of uncertainty. Just keep up with our updates over the next few days. 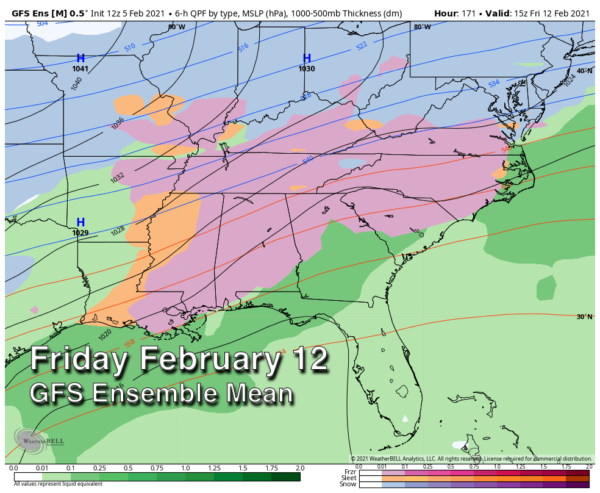 One thing seems pretty certain… very cold, Arctic air will invade Alabama in 7-10 days. Easily the coldest air so far this season… it is the airmass the models originally forecast to be in here early next week. The new CPC outlook for February 13-19 shows temperatures well below average over the eastern 2/3 of the contiguous United States. See the Weather Xtreme video for maps, graphics, and more details.

ON THIS DATE IN 1887: San Francisco experienced its most significant snowstorm of record. Nearly four inches was reported in downtown San Francisco, and the western hills of the city received seven inches. Excited crowds went on a snowball throwing rampage.

ON THIS DATE IN 1986: A supercell thunderstorm tracked through the Tomball area northwest of Houston, TX, and produced four tornadoes along with damaging microburst winds and up to tennis ball size hail. An F3 tornado killed two people, injured 80 others, and devastated a mobile home park and the David Wayne Hooks Airport.