COMPLEX WINTER FORECAST: This kind of winter weather pattern will always cause great weeping and gnashing of teeth in weather offices across the southern U.S. The Polar Vortex over Canada, very cold Arctic air over much of the U.S., and an active southern branch of the jet stream.

This morning we have areas of light rain and drizzle over Alabama, and temperatures are right at freezing over the northwest part of the state, so a few isolated slick spots are possible on bridges for the next few hours. I don’t think the problems will be widespread, but just be aware of the possibility in the broad zone from Hamilton and Haleyville up to the Shoals. Temperatures will hold in the 30s over the Tennessee Valley today… highs will be in the 40s for North/Central Alabama, and 50s are likely for the southern counties.

THE ALABAMA WEEKEND: Once again temperatures will be around freezing tomorrow morning over the northwest corner of the state, and some patchy bridge icing is possible due to freezing rain. Otherwise, widespread rain is likely during the morning, slowly tapering off by mid to late afternoon. Sunday will be mostly cloudy and generally dry. Temperatures over the weekend will be very similar to what we are experiencing today.

ICE ISSUES? Precipitation will move into Alabama Sunday night, and this could be in the form of freezing rain for parts of North and West Alabama possibly creating some travel impact, mainly north of I-59 (north of Tuscaloosa, Birmingham, and Gadsden). While there could be a brief break Monday, a more significant round of precipitation comes later Monday into Monday night.

Thermal values suggest freezing rain will be possible again north of I-59. Some ice accumulation is very possible, and travel could be impacted, but it remains a little too early for a specific forecast involving the placement and timing of the primary freezing rain threat. It is possible that winter weather advisories, or maybe a winter storm watch will be needed for some part of North or West Alabama for this event… be sure and keep up with forecast updates over the weekend. 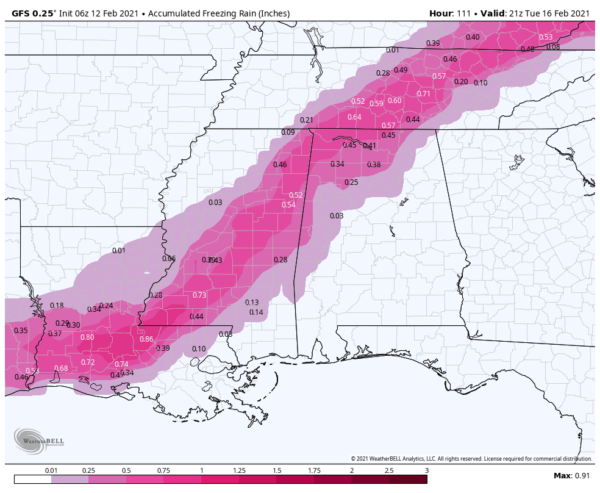 For the rest of Alabama, Monday and Monday night will bring just a cold rain… ending very early Tuesday, most likely during the pre-dawn hours.

Tuesday and Wednesday look generally dry with temperatures remaining below average. The next wave bring a big soaking Thursday, maybe even a few strong thunderstorms for the southeast part of the state. More cold air moves in following the rain, and a few snow flurries are possible Thursday night in the colder air, but for now accumulation doesn’t look likely. See the Weather Xtreme video for maps, graphics, and more details.

NOTE: Understand this forecast can, and probably will change in coming days. There is inherent uncertainty in any weather weather forecast for Alabama, especially in this kind of pattern. Also know that the boundary between a cold rain, and freezing rain/ice accumulation is never a straight line like you see on maps, identifying that boundary is always a challenge.

ON THIS DATE IN 1958: Snow blanketed northern Florida, with Tallahassee reporting a record 2.8 inches. A ship in the Gulf of Mexico, 25 miles south of Fort Morgan Alabama, reported zero visibility in heavy snow on the afternoon of the 12th.