TEMPERATURES REMAIN BELOW AVERAGE: After a very cold morning with lows mostly in the 20s, temperatures have recovered into the 50s across Alabama this afternoon. High, thin clouds will move over the state tonight, but the weather will stay cold and dry with another freeze for most of the state. Lows early tomorrow morning will be in the 24-32 degree range.

The weekend will stay dry with partly to mostly sunny cool days and fair cold nights. Highs will be in the low 50s, and lows will stay mostly in the 20s.

NEXT WEEK: Monday will be dry with a high in the mid 50s. Clouds will move in Tuesday, and we will introduce the chance of a few showers in association with a disturbance riding along in the southern branch of the jet stream. Moisture will be limited, and rain amounts should be light. Wednesday looks dry with a high in the low 60s. Then, we will bring in another chance of showers Thursday night into Friday ahead of a cold front. For now severe storms are not expected, and the rain should be gone by the weekend. At the moment the weather looks cool and dry for Iron Bowl Saturday in Alabama with highs in the 50s. See the daily Weather Briefing video for maps, graphics, and more details. 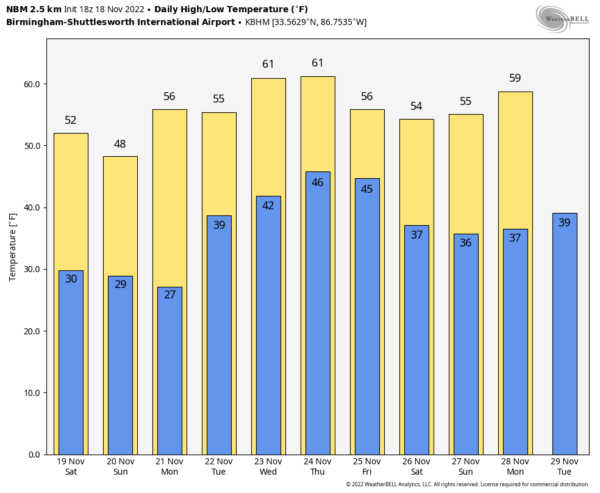 TROPICS: The Atlantic basin remains quiet; tropical storm formation isn’t expected through the rest of the season, which ends November 30.

FOOTBALL WEATHER: Expect fair and cold conditions for the high school playoff games tonight with temperatures falling from the mid 40s at kickoff, into the 30s by the second half.

Tomorrow, Alabama will host Austin Peay at Bryant-Denny Stadium (11:00a CT kickoff)… the sky will be mostly sunny with temperatures rising from near 49 degrees at kickoff into the mid 50s by the final whistle.

Auburn will host Western Kentucky at Jordan-Hare Stadium (3:00p CT kickoff)… it will be a partly sunny afternoon; about 55 degrees at kickoff, falling into the upper 40s by the four quarter.

Tomorrow night, UAB travels to Baton Rouge to take on LSU (8:00p CT kickoff)… expect a cloudy sky with temperatures hovering around 50 degrees during the game. A few showers are possible during the game.

ON THIS DATE IN 1957: An estimated F2 tornado moved across the Birmingham metro from Ensley to Tarrant. After touching down in Ensley, the tornado proceded Northeast through the Pratt area and North Birmingham and eventually into Tarrant. Many homes between 22nd and 24th streets on 35th and 36th Avenues North were damaged with numerous large trees down around the area. The Birmingham Airport reported winds of 69 mph and sited the funnel just to the northwest. Damage in Tarrant was mainly to the industrial area. One person was killed and 35 were injured.