COLD WINTER DAY: Temperatures just haven’t budged across Alabama today. They are generally between 35 and 43 degrees at mid-afternoon; the average high for Birmingham on January 8 is 53. Clouds persist over the state, but the precipitation has ended. We expect gradual clearing late tonight… the low early tomorrow will be in the mid to upper 20s.

THE ALABAMA WEEKEND: Cold and dry weather is the story tomorrow and Sunday; the high tomorrow will be in the mid 40s, followed by upper 40s Sunday. The sky will be partly sunny both days; clouds will increase Sunday night ahead of the next weather system approaching from the west.

COLD, MESSY DAY MONDAY: Precipitation will begin across Alabama Monday morning, and as it begins a mix of snow, sleet, and possibly some freezing rain is possible over the northern half of the state. The best chance of snow is over the northwest counties, north and west of Birmingham.

For Central Alabama, a brief period of wintry mixed precipitation is likely early Monday as temperatures will initially be around freezing before warming into the upper 30s by late morning. The area of concern is generally along and northwest of a line from Marion Junction to Prattville to Roanoke. The precipitation is expected to be light and the duration is limited. In addition, ground temperatures remain above freezing, which would limit any slick spots to elevated surfaces such as bridges and overpasses at worst.

A cold rain is likely for most of Alabama during the midday and afternoon hours, but snow could continue over the northwest counties. Moisture will be somewhat limited, but some accumulation is very possible, if not likely around Florence/Muscle Shoals. Be sure and watch for weather updates over the weekend. 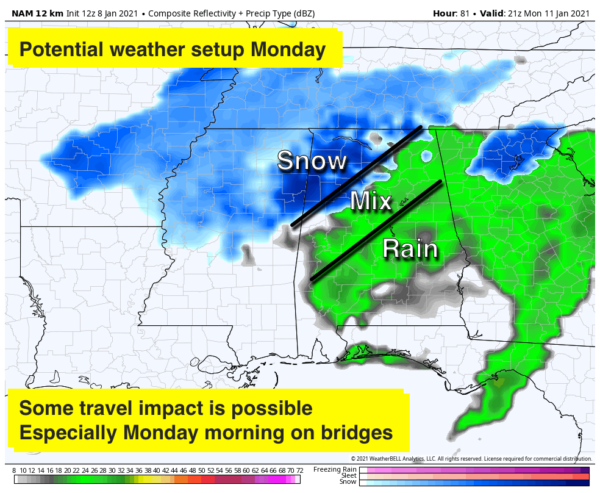 REST OF NEXT WEEK: The weather looks dry Tuesday through Friday. Temperatures moderate, with highs back in the 50s by Wednesday and Thursday. Some global models show much colder air returning late in the week Friday… See the Weather Xtreme video for maps, graphics, and more details.

ON THIS DATE IN 1973: Georgia’s worst ice storm since 1935 occurred on from the 7th through the 8th. Freezing rain and sleet began during the early morning hours on Sunday the 7th and ended in most areas during the day on Monday. Total damage was estimated at well over $25 million. The electric power companies suffered losses estimated at $5 million, and telephone companies had another $2 million in damages. Some schools were closed for more than a week.

Look for my next Weather Xtreme video here by 7:00 a.m. Monday… enjoy the weekend!