COLD, DAMP DAY: Cloudy, cold, damp weather continues across Alabama today. There is some lingering rain early this morning south and east of Birmingham, with scattered patches of drizzle elsewhere. The precipitation will end later this morning, but clouds linger through the day with temperatures going nowhere. Most places hold in the 40s today; some communities across the Tennessee Valley of far North Alabama won’t get out of the 30s. The sky will gradually clear tonight.

THE ALABAMA WEEKEND: The weather will be cold and dry with partly sunny days and mostly fair nights. Early morning lows will be in the mid to upper 20s; the high tomorrow will be in the mid 40s, followed by upper 40s Sunday. Clouds will increase Sunday night.

MONDAY: Confidence is growing that most of Alabama will see a cold rain Monday with the next weather system, however there is a chance it begins as snow over parts of North and Northwest Alabama. For now it appears highest probability of snow Monday morning will be north of a line from Vernon to Cullman to Scottsboro… temperatures there could be a little below freezing so some impact is possible. But again, for most of the state it looks like a cold, rainy day. Precipitation amounts should be light with limited moisture; totals under 1/4 inch are expected. 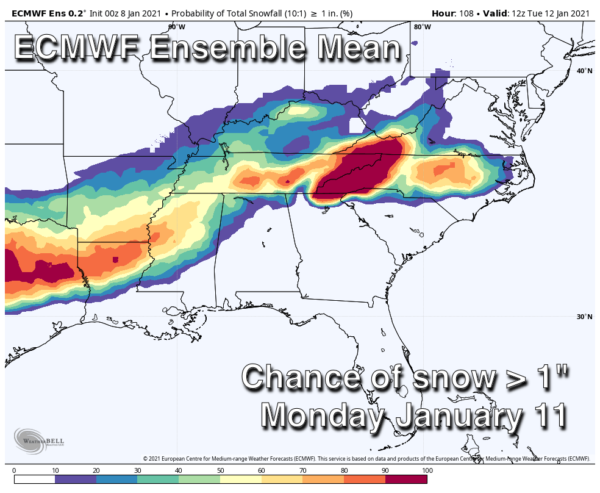 We will be much more specific with the rain/snow line, and potential impact over the weekend.

REST OF NEXT WEEK: The weather looks dry with a slow warming trend; afternoon temperatures reach the 50s by Wednesday and Thursday. See the Weather Xtreme video for maps, graphics, and more details.

ON THIS DATE IN 1973: Georgia’s worst ice storm since 1935 occurred on from the 7th through the 8th. Freezing rain and sleet began during the early morning hours on Sunday the 7th and ended in most areas during the day on Monday. Total damage was estimated at well over $25 million. The electric power companies suffered losses estimated at $5 million, and telephone companies had another $2 million in damages. Some schools were closed for more than a week.