COLD FRONT OVER NORTH ALABAMA: We have quite the thermal contrast over Alabama this afternoon thanks to an Arctic front just northwest of Birmingham. Cullman reported 39 degrees at 2p CT, while on the south side of the front Birmingham was at 63. The front will continue to creep southward tonight, and the rain across the state will end from west to east over the next few hours. 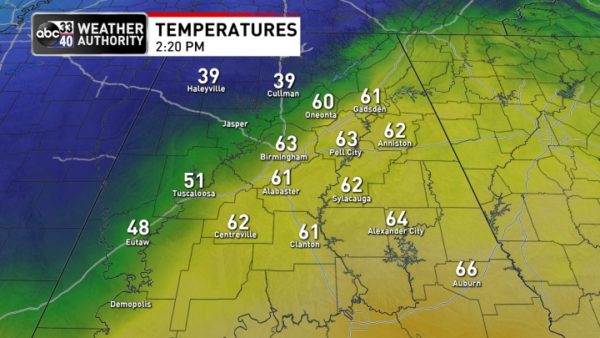 TOMORROW AND THE WEEKEND: Tomorrow will be mostly cloudy and cold; temperatures will hold in the 30s over the Tennessee Valley… 40s for Birmingham, Tuscaloosa, Anniston, and Gadsden, and 50s to the south. Rain returns to the state tomorrow night into Saturday morning; for most places it will be a cold rain, but temperatures will be close to freezing over the northwest corner of the state, and a brief period of freezing rain is possible early Saturday around the Shoals. For now no major impact is expected, but watch for any forecast changes.

The rain will end Saturday afternoon from west to east, otherwise the day will be cloudy and cold with temperatures in in the 30s for the northern third of the state… 40s for Central Alabama, and 50s for the southern counties. Sunday will be dry with similar temperatures… the sun might break out at times.

ICE ISSUES MONDAY? Global models are coming into better agreement with the position of Arctic air Monday as a major winter storm lifts out of Texas. It now looks like freezing rain will be a possibility for North and West Alabama Monday and Monday night. It is still too early for a very specific impact forecast, but for now it looks like the greatest chance of ice accumulation will be north of I-59. This certainly will have potential to bring icy roads and other impact… once we get within 60 hours of the event we can nail down the timing, placement, and impact with much greater confidence.

For areas along and south of I-59, it looks like Monday will bring a cold, soaking rain. The precipitation will end after midnight Monday night, during the pre-dawn hours Tuesday. 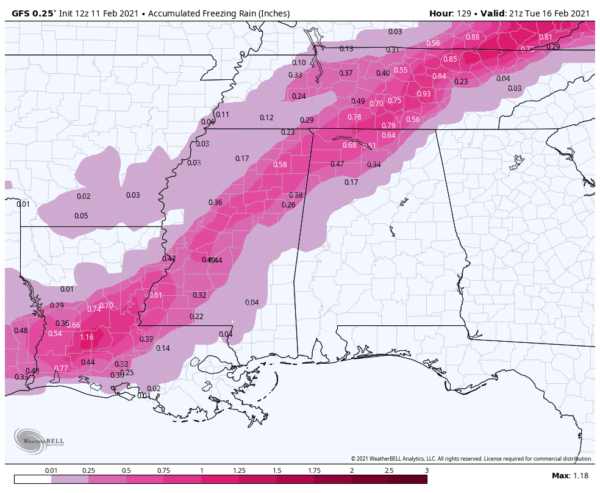 The daytime hours Tuesday, and Wednesday will be dry and cold. Then, another wave in the southern branch of the jet stream will bring rain Thursday… we are seeing some signals that rain could turn to some type of wintry precipitation Thursday night before it all ends. All in all a complex, interesting winter weather pattern for the southern U.S. over the next 7 days. See the Weather Xtreme video for maps, graphics, and more details.

ON THIS DATE IN 1983: Called the “Megalopolitan blockbuster snowstorm,” this major snowstorm impacted the Mid-Atlantic and southern New England. Snowfall up to 25 inches fell at Allentown, Pennsylvania. Snowfall amount of 35 inches occurred in parts of the Blue Ridge Mountains of West Virginia at Glen Cary. Windsor Locks, Connecticut recorded a record 19 inches in 12 hours. A ship sunk off the Virginia/Maryland coast killing 33.