TODAY: After the warm front moved through the area on Friday, it washed out and now has become a cold front, and it will very slowly drift into the extreme northern parts of North Alabama throughout the day. For Central Alabama, that means that skies will remain generally cloudy with isolated to scattered showers possible mainly for locations north of I-20. A few rumbles of thunder may become possible during the afternoon, but no severe weather is expected. Highs will be in the lower 70s to right around 80 degrees.

SUNDAY: The old cold front will eventually dissipate, but a new and stronger cold front will begin its trip toward Central Alabama on Sunday. At this point, much of the morning and into the early parts of the afternoon may be dry, but rain and storms look to move into the northwestern parts of the area during the latter part of the afternoon and eventually moving throughout the rest of Central Alabama. No severe weather is expected and highs will be in the mid-70s to the lower 80s across the area.

MONDAY: The cold front will have made it to the southern parts of Central Alabama by Monday, but rain and thunderstorms will be likely for the entire area to start, but rain chances do begin to dissipate some as we move through the afternoon and evening hours. No severe weather is expected and highs will be in the mid-50s to the upper 60s.

TUESDAY: Showers and a few thunderstorms will remain in the forecast for Tuesday, but the activity will be finally be moving out of the area during the overnight hours. Highs will be in the mid-50s to the mid-60s across the area.

WEDNESDAY: The good news is that the shower and thunderstorm activity is finally out of Central Alabama on Wednesday, and we’ll get a brief chance to dry out a little. Skies will be partly to mostly cloudy and highs will be in the lower 60s to the lower 70s.

THURSDAY: A surface low looks to form over the northern parts of Texas on Thursday that will be moving in our direction. Moisture will move back into the area by the afternoon hours and a few isolated to scattered showers will be possible for the remainder of the day. Highs will be in the 60s.

FRIDAY: The low will be over Central Alabama by Friday afternoon and that means we can expect a good coverage of showers and thunderstorms throughout the day. The GFS is painting a decent amount of instability over the area during the afternoon and evening hours, so we may have to watch for a few strong storms. Highs will be in the upper 50s to the upper 60s. 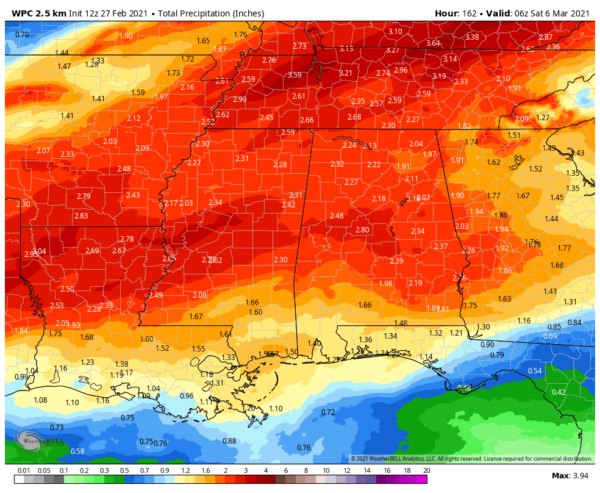 PROJECTED RAINFALL AMOUNTS: We can expect a decent amount of rainfall across Central Alabama for this seven-day period as the WPC is projecting upwards of 2-3 inches for the area through midnight on Friday night.

SEVERE WEATHER AWARENESS SALES TAX HOLIDAY: For the rest of this weekend, the state of Alabama will hold a sales tax holiday for severe weather preparedness items. Don’t miss this great opportunity to purchase any items you may be missing from your emergency kit. For more information, including tax-exempt items and participating counties and municipalities, please visit https://revenue.alabama.gov/sales-use/sales-tax-holidays.

ON THIS DAY IN WEATHER HISTORY: 2010… A weak EF0 tornado causes no damage as it moved across California’s southern San Joaquin Valley. However, it is the only tornado reported in the United States during the month. According to the Storm Prediction Center only five months since 1950 have lacked a tornado report.