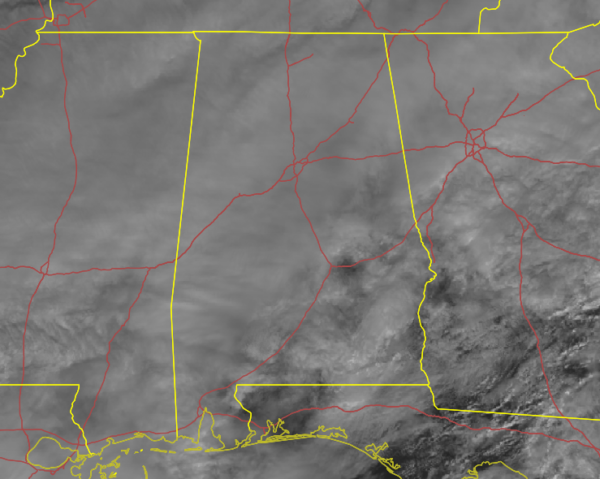 WEATHER FOR THE REST OF YOUR FRIDAY
Skies are mainly cloudy across Central Alabama, but there are a few breaks over the southeastern and extreme eastern parts of the area that is allowing a few rays of sunshine through. Under those clouds, we do have some light shower activity mainly north of the I-20 corridor with a few down in the southeastern parts around Auburn, Union Springs, and Phenix City. Temperatures at 11:00 am were in the lower 30s to the mid-60s across Central Alabama. Eufaula was at 65 degrees while it was at the freezing point in Haleyville at 32 degrees. Birmingham was at 38 degrees.

Scattered showers will continue across portions of the area at times throughout the rest of the daylight hours, with the higher rain chances eventually moving over the southern half of the area. Afternoon highs will eventually climb into the mid-40s to the mid-60s across Central Alabama from northwest to southeast.

Shower activity will be on the increase during the late night and overnight hours, and rain will be likely for all the area. Temperatures may just dip low enough in the extreme northwestern parts of the area (Marion, Winston, and Northern Lamar counties) that there may be some minor freezing rain accumulations after 3:00 am. If that occurs, do expect some minor travel issues with slick spots mainly on bridges and overpasses. The rest of the area will see just a cold rain. Lows will be in the lower 30s to the lower 50s from northwest to southeast.

THE CENTRAL ALABAMA WEEKEND
While most will wake up on Saturday morning with temperatures above freezing, those extreme northwestern locations may stay at or just below freezing until around 9:00 am. This will keep a very small chance of freezing rain until those temperatures get above 32 degrees. After that, rain will be moving eastward and out of the area throughout the day, with most locations dry by the evening. Afternoon highs will be in the upper 30s to the upper 50s across the area from northwest to southeast.

A few showers will be possible over the southeastern parts of the area to start off your Valentine’s Day (yes, that’s Sunday, guys), but those will move out by the late afternoon. Showers will become possible again by the late-night and overnight hours over the extreme east and southeastern parts. The rest of Central Alabama looks to stay dry. Highs will be in the upper 30s to the upper 50s.

STILL QUESTIONABLE ABOUT MONDAY’S WEATHER
It is still looking like a very tricky forecast to nail down at this point, but both the GFS and European models have come into a little better agreement that freezing rain will be possible for locations north and west of the I-59 corridor. The main window for that to occur looks to be in a window from 12:00 pm Monday to 12:00 am Tuesday. The big questions will be… how far does the cold air make it eastward into the area… and… how heavy will the rain rates be? If the rain is too heavy, it will pull the warmer air down with it and warm the surface temperatures.

Remember, this is still a low confidence forecast as there is inherent uncertainty in any winter weather forecast for Alabama, especially with the type of weather pattern we are caught in at the moment. This forecast can and probably will change over the coming days. Also, freezing rain or ice accumulations never occur in a straight line like you see on any forecast maps as it is a challenge to forecast that boundary. We’ll keep you posted.

A DRY TUESDAY; SHOWERS BACK FOR WEDNESDAY
Tuesday looks to be a dry day across Central Alabama, but cloud cover will hang around for the most part. Temperatures will take a while to recover as well during the morning hours, but afternoon highs will be in the mid-30s to the mid-50s. A good part of Wednesday will be dry at this point, but shower chances look to move in from the south during the late afternoon and into the evening hours. Highs will be in the upper 40s to the lower 60s.

STORMS POSSIBLE ON THURSDAY; COLD RETURNS ON FRIDAY
Thursday looks to be a wet and potentially a stormy day. A deepening surface low will move across Central Alabama or into the North Alabama that will bring rain and thunderstorms to the area. We are already seeing signs that we will have some instability mixed in with decent shear values, which may lead to the potential for a few strong storms south of the low. It’s way too early for specifics or to even forecast severe weather at this point as we need to get through the potential freezing rain threat on Monday. Thursday’s highs will be in the mid-40s to the mid-60s. Next Friday will be a drier and much cooler day with clearing skies and highs in the mid-30s to the mid-40s.

SEVERE WEATHER AWARENESS WEEK: FEB 21-26
Alabama is no stranger to severe weather, including tornadoes. They can happen any month of the year and any time, day or night. However, our primary severe weather season is considered to be from November to May. Last year, 73 tornadoes touched down across Alabama. Unfortunately, four lives were lost, and over a dozen were injured. Advanced planning and increased awareness will help residents of Alabama survive these deadly storms. Throughout the week, we’ll have special posts and infographics on the blog about severe weather awareness and safety.

ON THIS DAY IN WEATHER HISTORY
• 1958: Snow blanketed northern Florida, with Tallahassee reporting a record 2.8 inches. A ship in the Gulf of Mexico, 25 miles south of Fort Morgan AL, reported zero visibility in heavy snow on the afternoon of the 12th.