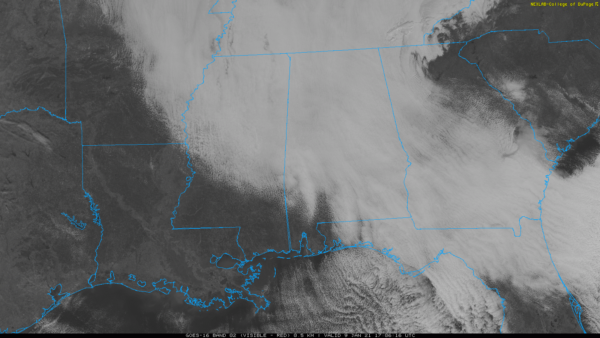 Taking a Look Outside at 11:00 am
Clouds continue to block out the sunshine as we are making it toward the midday hour in Central Alabama. Those will eventually begin to diminish somewhat from west to east later this afternoon and evening, and will become mostly clear by the late night and overnight hours. Temperatures were in the mid-30s to the lower 40s across Central Alabama. Eufaula was the warm spot at 41 degrees while Gadsden and Haleyville were tied as the cold spots at 34 degrees. Birmingham was sitting at 36 degrees.

The Central Alabama Weekend
The cold core upper low that brought us showers and a few snow showers and flurries is well off of the East Coast today, and we’ll continue to have our airflow coming out of the north. We’ll be dry and very cool across Central Alabama with partly to mostly cloudy skies. Highs will be in the upper 30s to the upper 40s. Skies will become mostly clear tonight which will allow the overnight lows to range from the lower 20s in the north to the upper 20s in the south.

Sunday will be a brighter day across the area as we’ll have mostly sunny skies throughout much of the day, before clouds start to move in late. We’ll stay dry and afternoon highs will be in the lower 40s to the lower 50s.

Some Wintry Mischief Possible on Monday
A low that will be bringing decent snow to much of north and central parts of Texas on Sunday will be moving in our direction on Monday. It will move into the area late and fizzle out over the northern portions of the area. The latest GFS is really drying this system out only bringing us very light rainfall across much of Central Alabama, and some snow flurries northwest of the I-59 corridor. The European has backed off a little on the moisture amounts as well, keeping the snowfall activity to very light snow showers or flurries northwest of I-59 with light rain for the rest of the area.

Temperatures will start off in the upper 20s in the northwest to the mid-30s in the southwest, so there may be a short period of time during the morning that some very minor accumulations may take place in the extreme northwestern parts of the area on elevated surfaces mainly north of a line from Reform to Jasper to Arab to Scottsboro, while the rest of Central Alabama will be too warm for any accumulations (as of this forecast). Those accumulations that do occur will not last long as highs will make it into the lower 40s to the lower 50s across the area from northwest to southeast.

All moisture will exit out of the area just before or right around midnight and overnight lows will stay above freezing south of the I-59 corridor while north of that, most of the moisture will have evaporated from the surfaces before temperatures drop below freezing. No major travel issues are expected, but one or two slick spots may be possible on elevated surfaces. Keep checking back with us for any updates through the remainder of the weekend.

Dry With a Warming Trend Through Thursday
The moisture will be well out of the area on Tuesday as skies start the slow process of clearing some. Highs will be in the mid-40s to the lower 50s. Wednesday will feature plenty of sunshine and slightly warmer temperatures as highs will be in the lower to mid-50s across the area. Thursday will be a little warmer with highs reaching the mid-50s to the lower 60s underneath mostly sunny skies.

A deepening trough will move into Central Alabama on Friday that will bring us clouds with rain chances moving in during the late afternoon through the evening hours. Highs will be in the lower 50s to the lower 60s.