RADAR CHECK: The line of strong to severe thunderstorms is pushing through the southeast corner of Alabama just before sunrise this morning, and across the Florida Panhandle. To the north, rain is over the eastern quarter of Alabama, moving quickly into Georgia. Clouds will linger across the state today, and winds could gust to 30 mph in spots through the afternoon… a wind advisory remains in effect for most of the state. Temperatures will slowly fall through the day in most places; North Alabama will settle into the upper 40s and low 50s, with mid to upper 50s for the southern counties.

A few sprinkles or snow flurries are possible over the northern half of the state tonight and early tomorrow. We we see a snow flake or two, there won’t be any accumulation or impact. The day tomorrow will feature a mix of sun and clouds with highs in the 40s over North Alabama, with 50s to the south.

FRIDAY AND THE WEEKEND: Friday will be a sunny day. After a sub-freezing start, highs will be in the 50s and 60s. Dry weather continues Saturday with seasonal temperatures, but a disturbance will bring periods of rain Sunday. There could be some thunder, but there is no risk of severe thunderstorms.

NEXT WEEK: For now it looks like we get in the rain Monday, but occasional rain is likely statewide Tuesday and Wednesday. Colder and drier air rolls into the state Thursday and Friday. See the daily Weather Briefing video for maps, graphics, and more details. 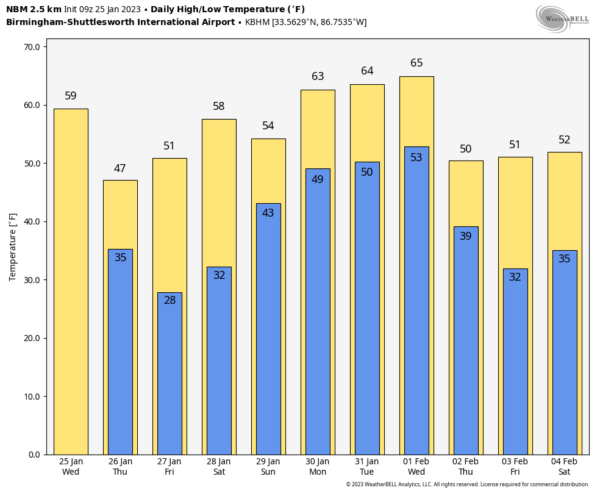 TWO YEARS AGO TODAY: An EF-3 tornado moved through Fultondale, just north of downtown Birmingham, killing one person (14 year old Elliott Hernandez) and injuring about 30 more. The parent storm was first tracked from near Interstate 55 in Central Mississippi. As the storm moved across Mississippi and into West Alabama, it exhibited episodes of rotation, but none were strong enough to produce a tornado. As the storm entered Jefferson County, its structure underwent organization. A rotational signature quickly matured, and a tornado warning was issued at 10:34 p.m. About ten minutes later, the tornado started to produce damage.

The tornado began along Chapel Hills Parkway, where minor shingle damage occurred. The tornado tracked northeastward across Ellard Road and directly over the Walker Chapel Road overpass on Interstate 65. It was at this interstate exit where the tornado began to intensify rapidly, snapping numerous power poles and causing substantial damage to a hotel. The tornado continued northeastward, crossing Highway 31, causing mostly tree damage along the highway. As the tornado moved into residential areas along Fulton Drive and Lykes Boulevard, substantial damage occurred with several homes being destroyed with at least one being swept off the foundation. The tornado was down for 10.4 miles, and the maximum path width was 900 yards.