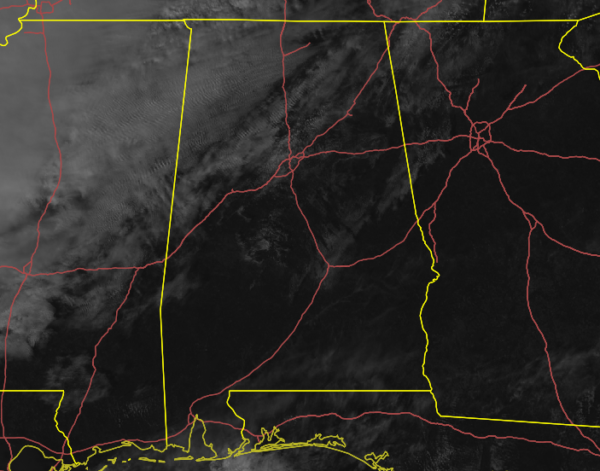 THE CENTRAL ALABAMA WEEKEND
Clouds have already started to move in with as a cold front approaches from the west. Those clouds will continue to build throughout the daytime hours today. Light shower activity will start to move in this evening and will keep rain chances in the forecast for the late-night through the overnight hours. Highs will be in the 50s with overnight lows in the lower to mid-40s.

For tomorrow, we’ll continue to have a small chance of a few light showers through the daylight hours across the area. All shower activity will be out of the area by tomorrow night. Highs will be in the lower 50s to the lower 60s.

Wednesday will be mostly sunny with highs in the upper 50s to the mid-60s. A strong low will be near the Great Lakes over Minnesota and Wisconsin and an associated cold front will be moving in our direction. Rain chances will move into the western parts of Central Alabama during the evening hours, with those chances increasing through the night. 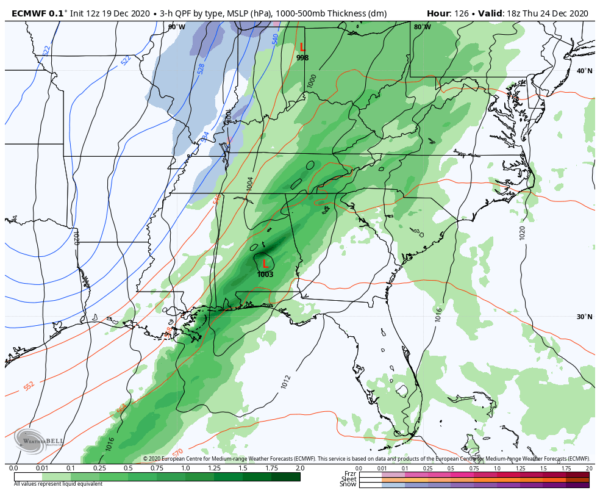 It is now looking like much of Christmas Eve will be wet at times with all the major precipitation coming in the form of rain. There is the possibility of some wrap-around moisture on the backside of the system that may fall as flurries or snow showers, but temperatures will be too warm for any problems. Thursday’s highs will occur just after 12:00 am in the mid-40s to the lower 50s and steadily fall into the mid-30s to the mid-40s roughly around sunset. Overnight lows will dip down into the lower 20s to the lower 30s. Not quite as bad as first projected, but still mighty chilly. 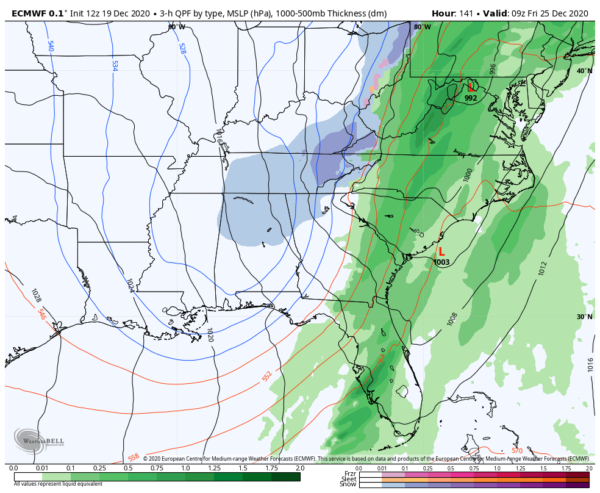 Don’t get your hopes up, but the European model has picked up on the idea of some snow flurries or light snow showers falling before sunrise across the northern half of Central Alabama on Christmas Day. Could some locations actually see enough to check “White Christmas” off of your bucket list? It’s too early to tell, but it may be possible for a dusting in a few locations. Once those move out of the area, skies will be mostly sunny and highs will reach the 40s across the area.

ON THIS DATE IN WEATHER HISTORY
1777: The Continental Army moved into an encampment at Valley Forge amidst stormy winds and piercing cold. A relatively moderate winter followed.

1957: A tornado, 200 yards in width, killed two persons along its 15-mile path from near Waldo to near Buena Vista in southwestern Arkansas. People from one house were carried 250 yards, and cars were said to have been carried 600 yards.

Finding a Foothold for Nordic Skiing in Rural Alaska

Finding a Foothold for Nordic Skiing in Rural Alaska