The last week has been magnificent, with warmth and sunshine more reminiscent of mid-July than mid-April.   And it was a godsend for the battle against COVID, since it encouraged people to get out into fresh air (where transmission is nearly zero) and to open their windows during the day.

While we were basking in the warmth, the eastern two-thirds of the nation has been hit by well below normal temperatures and even some snow.  To appreciate the contrasts, here are the temperature differences from normal for the week ending April 20th.   Stunningly cold in the central U.S,  and today it was even snowing in upstate New York. 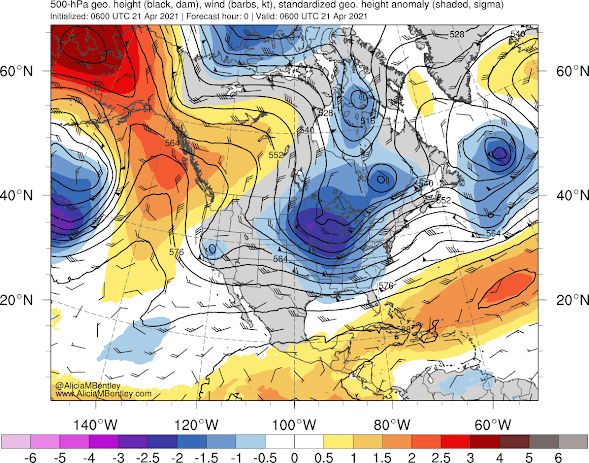 This pattern is about to reverse, as illustrated by the same upper-level map but for 5 PM Sunday. Trough of low pressure/heights over the West Coast/ 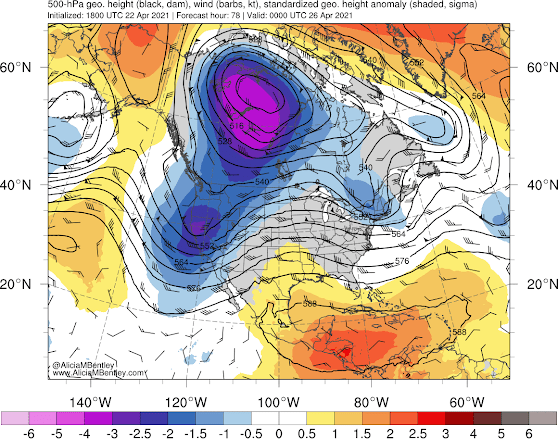 Rain will move into our region on Saturday morning, with the 24-h totals ending 5 PM Saturday being quite respectable (see forecast map below).

During the next 24 h (through 5 PM Sunday), lighter showers will continue over the Northwest while the heavier precipitation heads to parched California.

And if you put your sweaters away, you better get them out:  Saturday will only get to around 50F.  Cold enough for snow to return to the Cascades in force, with several inches above 4000 ft (see snow totals through 5 PM Sunday below).

And more rain will fall over us during the next week.  Enjoy the change.