Light snow has begun to fall around the region.    Earlier today, flow from the  Fraser River Valley and Strait of Georgia moved southward into the northern Olympics, and being forced to rise, dropped snow around Sequim and north Olympic foothills (see picture along US 101) 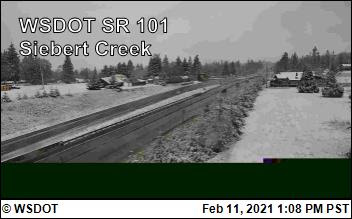 And the advertised first low pressure system is now heading towards Oregon (see forecast position at 4 PM), sending a shield of precipitation over northern Oregon and southern Washington 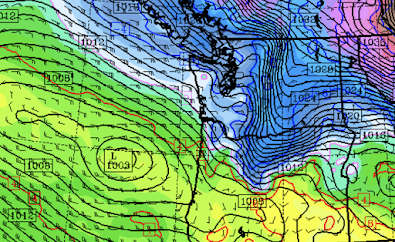 The weather radar image around 1 PM shows the light precipitation associated with this system.  Snow is now observed from SeaTac Airport and to the south,  lighter to the north.  Flurries to the north. 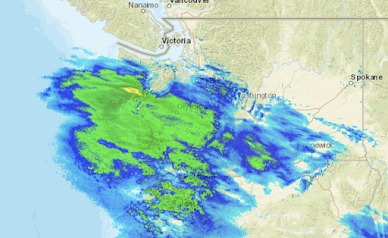 The latest WSDOT cams around Olympia are downright winter-like. 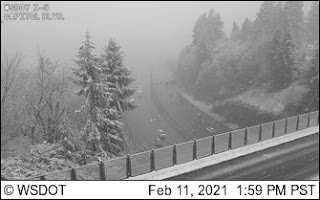 Now that we are close in, I can show you recent high resolution forecasts.  The latest run of the NOAA/NWS HRRR model showing accumulated snowfall is shown below.

First, through 10 PM tonight.  Light snow over most of western WA…but only .1 to 1 inch.  More (as much as 2-4 inches around Olympia and to the south). 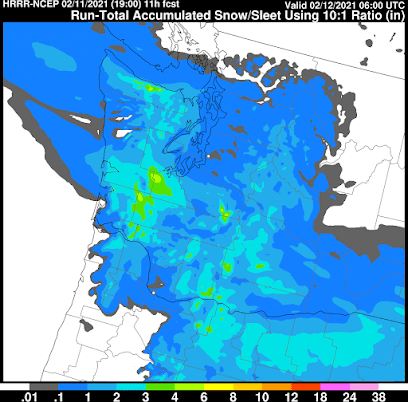 The total through 5 AM.  Shows more in the same spots.  But there is a very important issue here…less snow west of the Cascades from Tacoma northward…with the snow deficiency extending to the Sound.  This is due to strong easterly flow (from the east) sinking on the terrain.  Thus, local mayors can sleep well tonight. 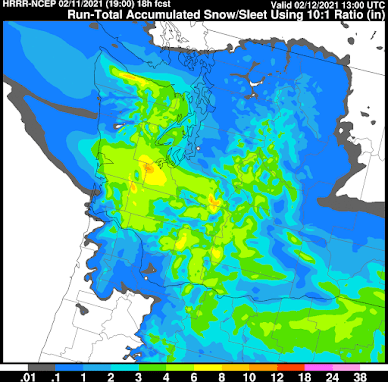 Let me show you the wind forecast for 10 PM tonight with a dashed oval indicating the easterly winds. Click to enlarge.  It will be blustery from North Bed to Enumclaw.

So this is stage one of the event.

Now stage two is the threatening and difficult part.  This is not your typical big snow event and Puget Sound is right on the edge for several reasons.

Another low will approach the Washington coast on Saturday.  Which means moisture extending farther north.

The snow totals from this morning European Center model is impressive.   But you will notice the pesky Cascade “snow shadow” due to the drying easterly flow.  Seattle ends up with 5-6 inches of snowfall…perhaps half of that in depth.  But MUCH more west of the Sound and over the south Sound, where some places could get a foot of snow. 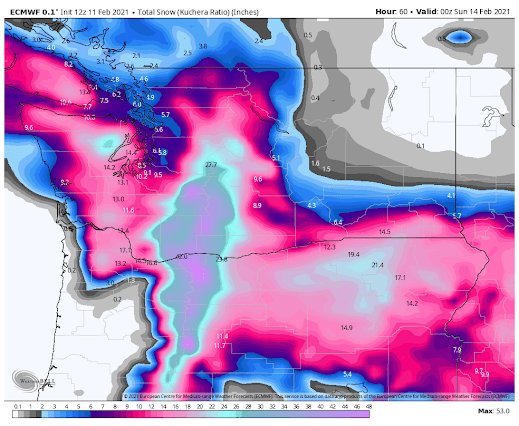 The main U.S. model the GFS, has subtle differences, with far more snow in general, particularly around Puget Sound.  Much less north of Everett. 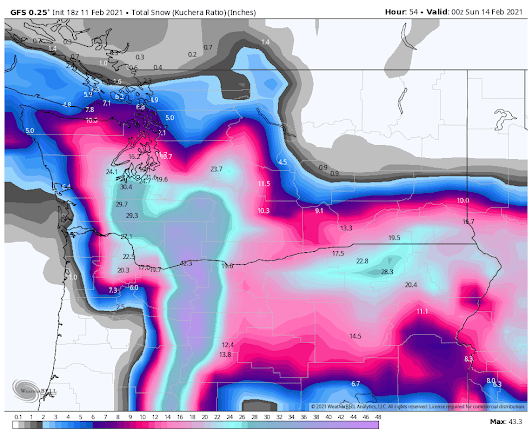 Is there uncertainty for the snowfall over central Puget Sound?  You bet there is.  Subtle differences in the position of the northern extent of the moisture, the location of the low, and the degree of downslope flow off the Cascades could really change things.

To demonstrate this, here is the ensemble of many forecasts for SeaTac for snow accumulation over time.  The forecast through 4 PM Saturday (00z/14) range from 1 inch to 20 inches!  The higher resolution run (blue line) is about 8 inches.  And I hate to say it….there is another snow event lurking on Monday for many of the ensemble members. 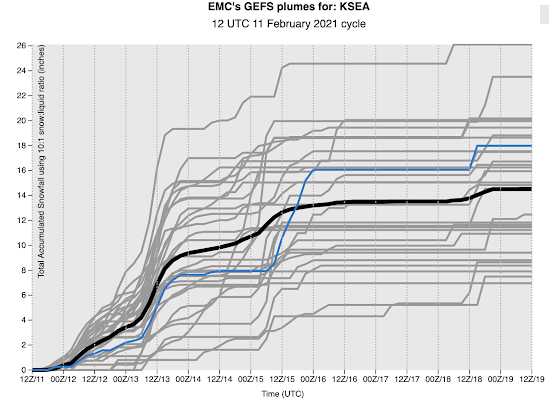 I will blog about this more tomorrow and will do my regular Friday morning podcast, which I will dedicate to the snow event.

The flurries outside are pretty right now.